Took my first crack at some Canadian Bacon and Venison Dried Beef last weekend. I had some pork loins which I bought over the holidays and got into Pop's Brine for 10 days. 2 whole loins cut into 8 pieces total. I ended up rolling 4 of the pieces into corn meal and making a "peameal" bacon. While the other 4 were destined for CB in the smoker. 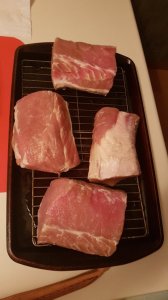 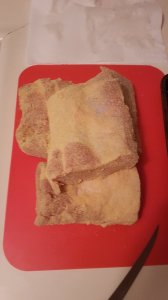 Also, I had a leftover hunk of tenderloin from my first deer which I got earlier this year. After grilling some up for dinner for my Dad and I on new years eve weekend, I put the leftover tenderloin into a brine/curing marinade I have used for jerky and let it cure about 6-7 days.

Recipe can be found here https://www.jerkyholic.com/original-jerky/ ... Also there are several other recipes on the site which I want to try out in the future.

For the remainder of the prep and smoking, I basically followed Bear's step by step below, but since I had a much smaller piece of Venison, the timing was a little different. The thing that surprised me the most, was that the small tenderloin ended up finishing at the same time as the larger pieces of CB.
https://www.smokingmeatforums.com/threads/canadian-bacon-and-dried-beef-cured-smoked.109617/

Out of cure and pellicle formed overnight in the fridge. 3/4 CB rubbed with Brown Sugar, CBP, Garlic Powder, the last just some brown sugar. The VDB I gave a little CBP and GP 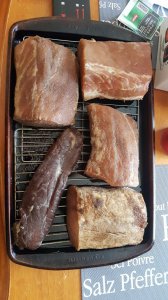 And of course some Qview / pictures of the process. The CB and VDB turned out great, but I have not had a chance to try the "peameal" yet. 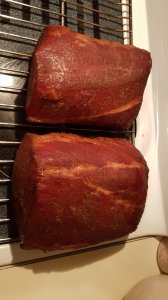 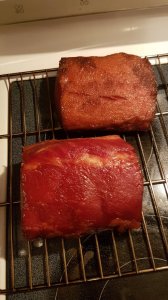 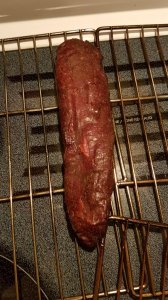 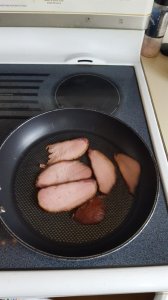 Would just like to thank all the members here again for all the information, step by steps etc. It has made the jump into smoking a great experience and I have been turning out some great tasting food already.
Reactions: browneyesvictim, Rings Я Us, ab canuck and 2 others

All looks good. But I have never heard peamill bacon
Reactions: McCann519

hank2000 said:
All looks good. But I have never heard peamill bacon
Click to expand...

I believe Peameal Bacon is a mainly Canadian thing. When I first started using the forum and seeing "Canadian Bacon", Peameal is actually what I first thought of. The typical cured and smoked Canadian Bacon seen here on the forum, is something I had never really tried until I made this batch myself.

Peameal is very similar to Canadian Bacon but without the smoke. Once the cure of the loin is complete, it is simply rolled in cornmeal (Yellow Pea Meal in the old days). It can then be sliced and fried or what we normally do is wrap in tin foil with a splash of 7up/Sprite or drizzle of maple syrup and roasted in the oven or BBQ until desired temp.

Looks great McCann. How was the fry test for you?
Reactions: McCann519

ab canuck said:
Looks great McCann. How was the fry test for you?
Click to expand...

Thanks ab canuck. The first time I tried pops brine, I made belly bacon and used around 1/2 cup of salt per gallon and found that it was not salty enough for my taste. This time around I ended up using the full cup to see what the difference was. This time it had a nice sweet and salty flavouring with a little more salt than sweet. I think next time around I would use the full cup ratio for belly bacon, and maybe cut it back to 3/4 cup or so on the CB. This is mainly a taste thing, it was not overly salty, I just prefer the CB to be a little sweeter.

Outstanding! Keep up the good work.
Reactions: McCann519
You must log in or register to reply here.