Well, fryers do at least.

I made a slightly lower in salt and sugar version, and I butcher all poultry to get a front and back half, this gives me a chance to tidy up the bird a little bit... trimming the ribs back and removing all sharp edges on the backbone. Butchering this way also gives me full control on finish temperature., and I never turn them, ever. This go round I used some cracked pepper in the brine, and after the rinse, no other seasoning. I cold smoked it for 2 hours in my Big Chief at about 100°, and hot smoked on my Big Green Egg for another 2 hours at 250° until 160° in the breast and 185° for the dark meat. We had some of the dark meat last night with dinner, and the breast is for sandwiches and salads this week. I tested some today.... it won't last the week. 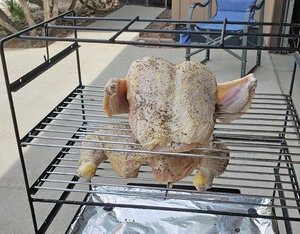 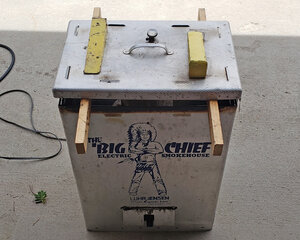 Each half plumps up really nice. 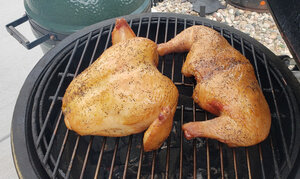 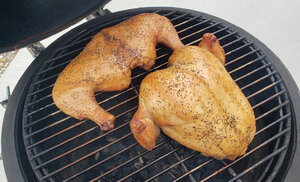 Right off the smoker 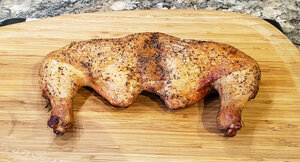 First slice after a 20 minute rest. I really push the internal on dark meat... about 185° is where I like thighs. 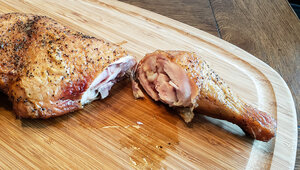 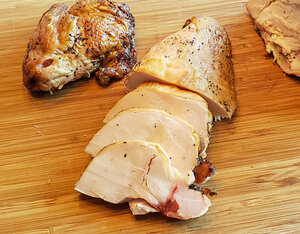 The plan tonight is to warm-up the drummies and a rib or two in the sous vide water oven. Large plate of cucumbers, onions, tomatoes, pickles on the side.

thirdeye said:
The plan tonight is to warm-up the drummies and a rib or two in the sous vide water oven. Large plate of cucumbers, onions, tomatoes, pickles on the side.
Click to expand...

sounds like a great meal, what time should I be there

Sundown, or a little after. It gets late pretty early out west.

Try some Fireman's Chicken also, from an adaptation of Dr. Baker's recipe when he crossbred the first Broiler chickens in the 1950's! Leaner, more tender than the Fryer chickens back then!

When my dad had his store in our little town of Adams Center, NY., our Volunteer Fire Department would have their annual Fireman's Field Days in August. There were rides and games and beer of course; plus they'd have a big pit Chicken BBQ every...
www.smokingmeatforums.com

pops6927 said:
Try some Fireman's Chicken also, from an adaptation of Dr. Baker's recipe when he crossbred the first Broiler chickens in the 1950's! Leaner, more tender than the Fryer chickens back then!
Click to expand...

I'm glad you mentioned this, love the photo of your Dad's store with those early grills. HERE is another link to a BBQ pamphlet by Robert Baker, it has numerous designs for pits too. I always got a chuckle how he sized the recipe up to handle several hundred people. It's also known as State Fair Chicken because the Bakers set up the 'Chicken Coop' at the fair.

My grandfather used to make Fireman's Chicken and you are correct, the basting sauce falls into the brinerade category. I like it in the sauce overnight too. Some Italian salad dresssing (which is great by itself) can also add some zip to the the sauce as well when marinading. In the not too distant past, maybe 6 or 8 years, using mayonnaise on grilled chicken resurfaced and was a popular topic on many BBQ forums because of it's ability to help with crispy skin. I'm sure that popularity came from the Fireman's Chicken sauce. You are correct about popularity.... My niece met her husband while attending college at Cornell 15 or 20 years ago, all kinds of local events and church groups cook this recipe.

I don't like grilling chicken halves cut on the axis as the white meat and dark meat need different finishing temps, so quarters or split breasts work best for me. My only other chicken trick is to prick the skin. My favorite tool is the 3-needle sausage pricker tool from the Sausage Maker, but when I got into competition style chicken thighs I used a Jaccard because I was removing the layer of fat on the skins and injecting the thighs. For grins, here is my Grandmothers sauce recipe. I'm dating this one from the 60's since she has "oleo" listed as an ingredient. 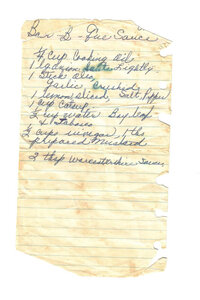 Here is Update #1 to this technique and the slight changes to Pop's Brine I made on two experiments.

For both of these cooks I increased the salt to these amounts:
1 gallon of water
150 grams canning salt (a little less than 1/2 cup)
30 grams white sugar
30 grams brown sugar
20 grams Cure #1 (heaping tablespoon)
3/4 teaspoon black pepper

This is 6# chicken I parted into a front half/rear half and was brined for 48 hours. I removed the skin from the breast (similar to my TURKEY BREAST method). I allowed 24 hours in the fridge for a pellicle on the breast and to dry the skin on the back half.... then cold smoked the bird for 2.5 hours and did a hot smoke finish which took just shy of an hour. The seasoning is coarse black pepper. 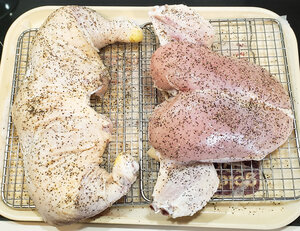 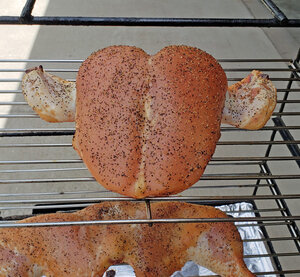 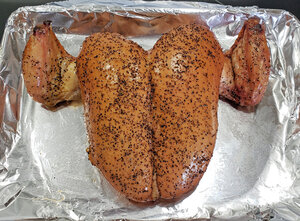 Comments: The salt level was still in the acceptable range (but I will drop it to 125 grams per gallon next time), moisture was spot on, flavor was very good. The pellicle was too firm for my liking. I like skinless breasts because the slices appears to have a nice seasoned skin, but it's just a tender layer of flavor from the rub. Maybe a 6 to 8 hour pellicle time would be better. So not a GONG, but I need more fine tuning.

I also tried some boneless skinless chicken breasts with the same brine, but used a 24 hour brine time, and a 3 hour rest in the fridge before smoking in the Big Chief for 75 minutes. Next they were moved to my BGE over a water pan for a change, and I used a wrap step once the internal was 140°. Finish temp was 158° in the thick end. One is seasoned with cracked pepper, the other has Cimarron Doc's Rib Rub with some black pepper.

The face that formally had skin is face down in the foil with some butter broth added. 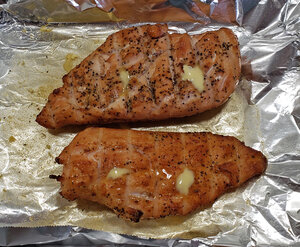 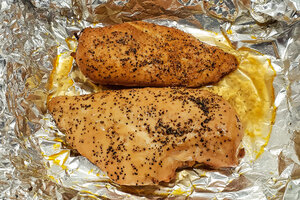 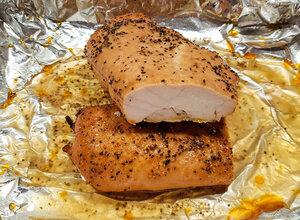 Comments: These came out just like my skinless turkey breasts, but with the brining the texture was perfect for slicing, nice color, moistness was great and the seasoning layer was tender. Like the half-bird, the saltiness was not overboard, but backing off from 150 grams to 125 grams will be my next experiment.
You must log in or register to reply here.
Share:
Reddit Pinterest Tumblr WhatsApp Email Link