Any Gumbo Fans Out There?

It's that time of the year down South.... so I figured it was time to spread the love and make a batch. I assembled the holy trinity (onion, green bell pepper and celery) and brought the pope (garlic) along to the party. I used some 'northern crab', shrimp, chicken drumettes and a couple links of andouille. And set out to work.

My roux takes the longest, about 45 minutes of constant stirring and I went for what Chef Paul would call a red-brown roux (upper right). The trinity is slowly added to the hot roux by the spoonful, which partially cooks the trinity. Later this mixture is added to seasoned chicken stock. 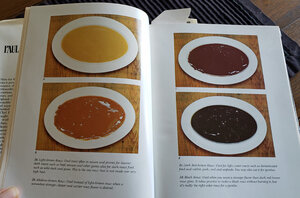 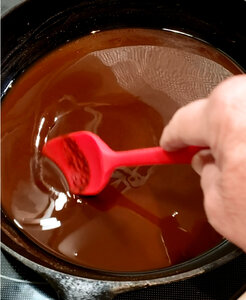 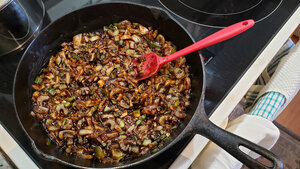 My crab and shrimp get added during the last 5 minutes, but after cleaning I take all the shells and wrap in cheesecloth to simmer in the broth for a richer flavor. 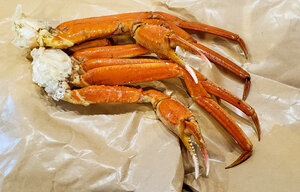 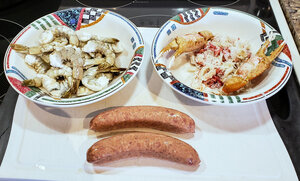 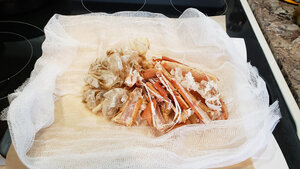 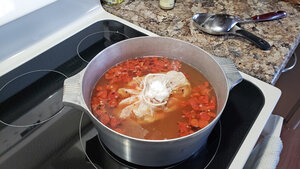 Meanwhile, my smoked meats are getting happy, and I saute some okra. The andouille is a smoked sausage, but it needs a light grilling to wake up the flavors before going into the gumbo. 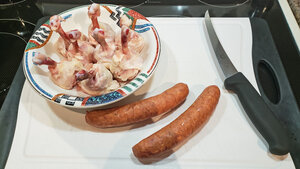 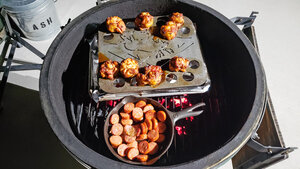 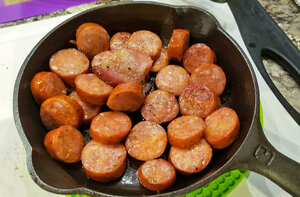 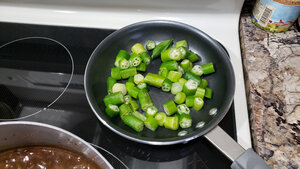 The warm roux mix is added by the spoonful to the broth and simmered, next the picked chicken meat goes in and cooks a little while. The sausage and okra goes in and is followed by the shrimp and I remove the Magnalite from the heat. In about 3 minutes the crab is dumped in, parsley is added and it's ready to dish up over rice. We like the Gumbo File (sassafras) and hot sauce at the table. 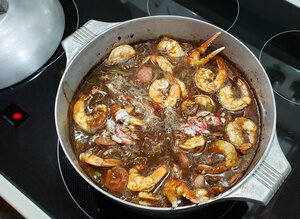 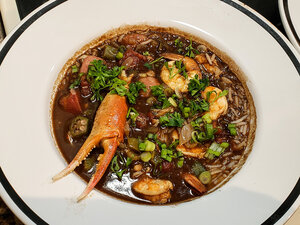 Now that does look real good to me. I love gumbo!! The only thing I would skip is the okra--just can't develope a taste for it.
Great job.
Gary

We make gumbo all the time, but I have to say that is the best gumbo I have ever seen!!
Really great recipe, The only thing I would change (for my wife) is omit the okra. She just doesn’t like it!
Al

I see you removed the pot from the heat, and then added the crab. Was the crab already steamed and cooked and you just needed to warm it up?

GaryHibbert said:
Now that does look real good to me. I love gumbo!! The only thing I would skip is the okra--just can't develope a taste for it.
Great job.
Gary
Click to expand...

SmokinAl said:
We make gumbo all the time, but I have to say that is the best gumbo I have ever seen!!
Really great recipe, The only thing I would change (for my wife) is omit the okra. She just doesn’t like it!
Al
Click to expand...

Thanks for the kind words. Taking the time to get the roux where you like it makes all the difference. And roux can be stored in the fridge for a couple of months with no problem or frozen for at least a year, so it's nice to have some around for gravies or soups where you want that flavor bump. Okra is on the list of least favorite vegetables for many people, it can be stringy and has a sticky slick texture. The reason I saute it is to change the texture a little. It's really good deep fried and served on the side to gumbo and pretty good grilled if you have the whole pods. Okra does help thicken gumbo but a lot of recipes just omit it. The gumbo file' is also a thickener and some folks just make a denser roux.


indaswamp said:
I see you removed the pot from the heat, and then added the crab. Was the crab already steamed and cooked and you just needed to warm it up?
Click to expand...

The crab is frozen but it has not been steamed first. Once removed from the shell and shredded it takes no time at all to heat up. I kind of monitor the doneness of the shrimp and use that as a guide for when to add the crab. It's hard to see but I do cut little windows in the claws so they cook faster and it's easy to remove the meat. The claws go in earlier than the picked crab meat.
Last edited: Nov 14, 2020

Man man man. That looks perfect. Wish I had a pot now lol. Okra is a necessity for mine. Nailed it bud

One of my favourite dishes done right. Big like.

Ok, you got my attention. Where does the line form to get a bowl of that? It looks and sounds amazing!!

That looks like you just took a big trip to flavor town! Very nice!

Hey....you gotta get in line. I was here first You're right though, it does look darn good!!

Thanks for the kind words. I used to watch JOOS-tain's cooking show on TV, and always cracked up when he said ''I gha-rawn-tee!'' The other series I liked was Great Chef's of New Orleans. Some of their accents were so strong they used subtitles. Amazon has two seasons of this show.

Well, Snow crab is not as strong as the blues I've caught on the Texas coast plus with Snow you don't get the full back like you do when you are the one crabbing. And flavor wise.., the Gulf brown shrimp bring a flavor all their own and we would buy them with the heads.... so more flavor too. Making that bouquet garni of shells to simmer does help. I'm not big on using clams or clam juice, but adding muscles bumps the flavor and they are much cheaper. Minor's makes a seafood base that is pretty good when used in moderation.