Cooked up some of the steaks from this thread ,

This is another whole cut from Gordon's food service . No roll , $6.99 a pound . This one looked pretty good in the bag so I grabbed it . I bought the whole ribeye a week or so ago . Figure I'll have some good trim from the 2 for ground beef for the freezer . Nice and thick . Fat looks pretty...

Wanted to go on the kettle over mesquite coals , but was way to windy . So My next favorite way is in a cast iron skillet , then finished in the oven .
Seasoned up with Canadian Steak seasoning , then held under vacuum over night . 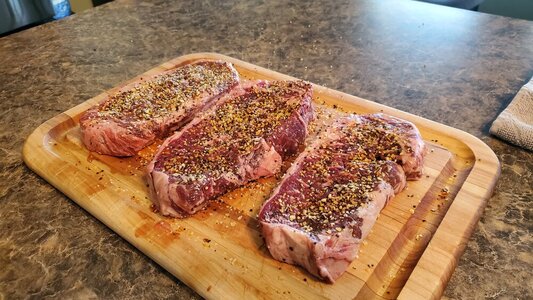 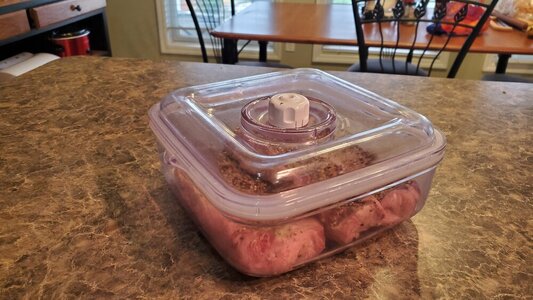 Next day I let them warm up on the counter for an hour or so . 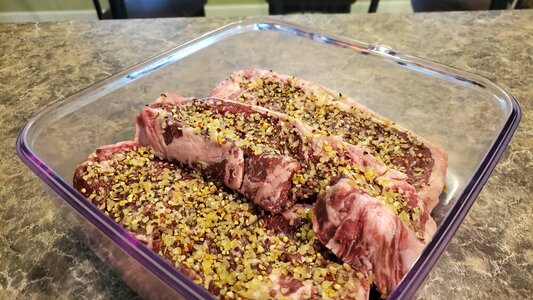 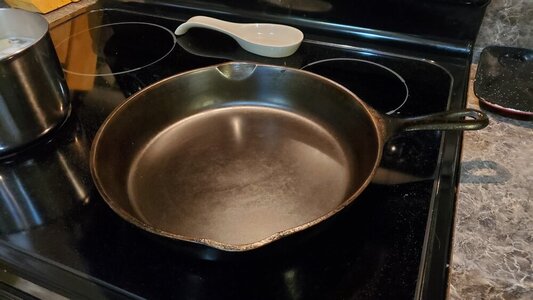 Steaks go in . I put just a bit of oil in the bottom because they were wet
from the seasoning . If they were dried off , I would go in the pan without oil . 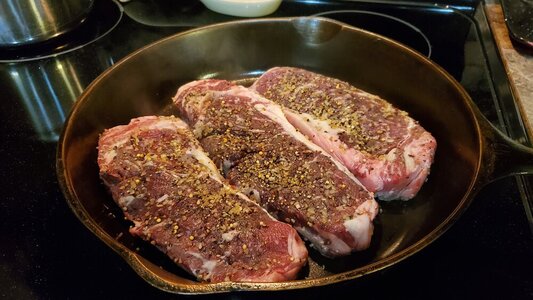 Didn't get the pan as hot as I wanted at the edges , and the pan is a bit crowded .
When they release I flip .
Add butter , garlic and Thyme from the Aero garden .
Then into a 350 degree oven . 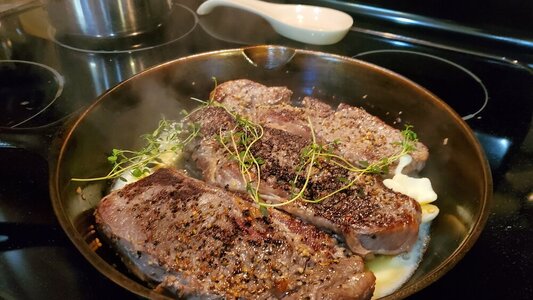 Coming out of the oven . Smells fantastic . 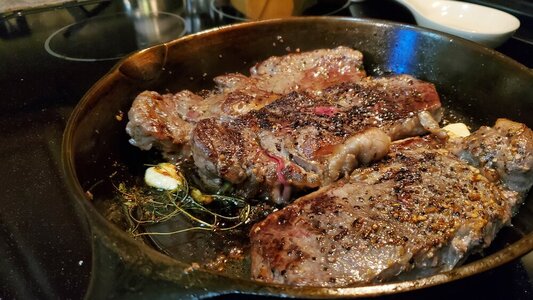 Not the best color on one on the left , but it was like butter . 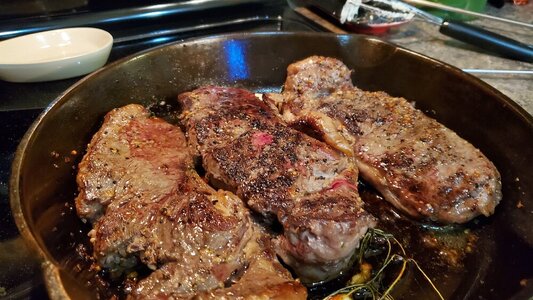 Rested and sliced . Great flavor on these , and completely tender .
I usually add Rosemary to the pan too , but I was out . 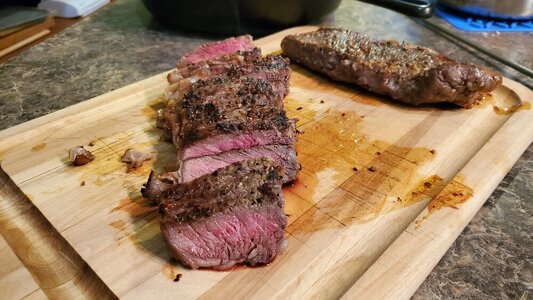 That looks delicious Rich! I bet it smelled wonderful coming out of the oven. Nice looking pan as well!

Now I know what I’ll be making for dinner tonight…

Thanks Al . It's really is a great method for steaks .

Brokenhandle said:
That looks delicious Rich! I bet it smelled wonderful coming out of the oven
Click to expand...

Thanks Ryan . Yup before and after . The smell really sets it up .
The fresh herbs at arms reach are so handy .
Welcome to the jungle . O'Basque said:
Now I know what I’ll be making for dinner tonight
Click to expand...

Lol . This place has that effect on ya . Thanks for lookin .

Man those look great! I like doing them like that as well but always end up smoking the house out lol.


chopsaw said:
Welcome to the jungle .
Click to expand... Impressive! You got some of that special green stuff growing in there to make brownies with?
Reactions: motocrash and chopsaw

Awesome!!
Now you got me wanting steak!!
I was thinking of making one, but rumor has it that we're having Prime Rib delivered to us on Easter Sunday, from the other end of the Driveway!
Nice Job, Rich!
Like.

Thanks John . Appreciate that .

SmokinVOLfan said:
always end up smoking the house out lol.
Click to expand...

SmokinVOLfan said:
Impressive! You got some of that special green stuff growing in there to make brownies with?
Click to expand...

Lol . Gave that up long ago , but you sure could . Been picking cherry tomatoes and jalapeno's for a couple weeks .
Using the basil , dill , thyme and parsley pretty regular or it gets dried .
Reactions: SmokinVOLfan

Bearcarver said:
Awesome!!
Now you got me wanting steak!!
Click to expand...

Bearcarver said:
rumor has it that we're having Prime Rib delivered to us on Easter Sunday,
Click to expand...

That's my kind of rumor . That sounds even better . Kids are gone for Easter . I just might thaw out a nice ribeye steak .

Looks great Rich! I'll be trying this next week. That CI pan you have there looks in great shape for being from the 50's. I can almost smell it from here. Great work.
Reactions: chopsaw

I missed this one, great work on those. That's steak perfection!
Reactions: chopsaw

Nice piece of work there Rich, steaks look perfect! Steaks in the CI skillet have become a real go-to here in the desert, do them out on the patio all year long. RAY
Reactions: chopsaw

Very nice job Rich. The steaks look beautiful. I don't think I've done any in a CI skillet but that looks like a great fall-back if we get weather that forbids outdoor cooking.

That some beautiful steaks! Love the shine on that skillet!

Man , that looks good, Rich!!
We've never been fans of strip steaks but I've never gotten a whole loin and cut it up myself.
I'll check GFS when I'm out tomorrow...
I have to be careful searing in the C.I. because of the smoke alarm as well LOL!
What's with the vacuum treatment?
Reactions: chopsaw
9

Ryan , that's one from my youth . Found it in my Mom's garage . I'm gonna get that posted up .
Reactions: Brokenhandle

Mike , it's a great way to do a steak . I don't get the pan so hot it smokes us out . Grab some fresh herbs and garlic cloves . Stick of unsalted butter .
Thanks for the comments .

Ringer said:
I missed this one, great work on those. That's steak perfection!
Click to expand...

Thanks Ray . Great way to do steaks .

tx smoker said:
Very nice job Rich. The steaks look beautiful. I don't think I've done any in a CI skillet but that looks like a great fall-back if we get weather that forbids outdoor cooking.
Click to expand...

Thanks Robert . It's a great method . Even if the weathers nice .


JLeonard said:
That some beautiful steaks! Love the shine on that skillet!
Click to expand...

Thank you Jim . I have a thread I need to post for guys that like cast iron . I found 2 in my Mom's garage that I got all cleaned up . One is a 1940's lodge no. 8 . That one came from my Grandma .
Reactions: JLeonard
You must log in or register to reply here.

Pulled my Cast Iron out....

B
Glass stove top not good for heat transfer question?

B
Cast iron cookware for free, must pick up in Naperville, IL

Got a salt block for Xmas