Red Beans and rice with No sugar cast iron cornbread

Winter weather is upon us here in the High Desert of Oregon, well sort of. Been the warmest November in a long time! Been 20-30 at night and near 70 during the days. Still the cold nights have me thinking comfort foods. One of our favorites is red beans and rice. Just so happens that I have a few smoked hocks hiding in the freezer just in case! Normally I would use the bacon I smoked in this dish but the wife wanted turkey bacon. Happy wife happy life!I also used chicken andouille sausage instead of pork. Once again Happy wife happy life.

Here's the recipe that I use:

1. Drain the beans, and set them aside.

2. Warm the olive oil in a large heavy-bottomed pot over medium heat. Add the bacon, and cook, stirring occasionally to break it up, for 6 to 8 minutes, until it’s crisp.

3. Chop the onion, bell pepper celery. When most of the bacon’s fat has rendered, add the onion to the pot, along with the celery, bell pepper, and the bay leaves, stirring well to coat everything with the fat.

4. Continue to cook, stirring occasionally, until the onion is translucent and the celery and bell pepper just start to soften. Stir in the paprika and cayenne, allowing the spices to toast for a minute or so.

5. Add the beans, ham hock, and stock. Increase the heat to high to bring everything up to a boil, then skim any foam from the top of the pot, reduce the heat to low, and cover with the lid. Let it cook, low and slow, for at least 3 hours, until the beans are falling apart. It’s not a soup, but there should be enough broth so that you see some movement in the pot; top it off with more stock if you need to.

6. Remove the ham hock out of the pot, pull all the meat off the bone, give it a rough chop, and add it back to the pot; slice the sausage (when I use chicken sausage I start with it whole and once it has cooked I slice and return to the pot) about 1/4 inch thick and add that, too. Season with 2 teaspoons salt, Tabasco, and sugar. Continue to cook, covered, over low heat, for at least another ½ hour, until it all starts to pull together. At this point, if you prefer, you can leave it alone for a couple of hours, returning just to stir occasionally.

7. While that happens, make the rice: First, chop the other onion. Combine the canola oil and butter with the other bay leaf in a separate pot over medium heat. Once the butter melts, add the onion and remaining 2 teaspoons salt.

As soon as the onion is translucent, stir in the rice. Defer to the package instructions for a water ratio; for 1 pound (about 2 cups) of jasmine rice, I add 3 cups of water. Increase the heat to high, and bring to a simmer; then decrease the heat to low, cover, and cook for another 15 minutes or so, until it’s tender.

Remove the rice from heat and let it rest for 10 minutes with the lid on, then fluff it with a fork. Remove and discard the bay leaves from both pots. Serve red beans over a scoop of rice, and sprinkle with scallions.

Preheat the oven to 450°F. Put a 10-inch cast-iron skillet in the oven to preheat for at least 10 minutes.

Combine the cornmeal, salt, baking soda, and baking powder in a medium bowl. Combine the buttermilk, egg, and ¼ cup of the melted lard in a small bowl. Stir the wet ingredients into the dry ingredients just to combine; do not overmix.

Move the skillet from the oven to the stove, placing it over high heat. Add the remaining tbsp. of melted lard and swirl to coat the skillet. Pour in the batter, distributing it evenly. It should sizzle.

Transfer the skillet back to the oven and bake the cornbread for about 15 minutes, until a toothpick inserted in the center comes out clean. Serve warm, directly from the skillet. 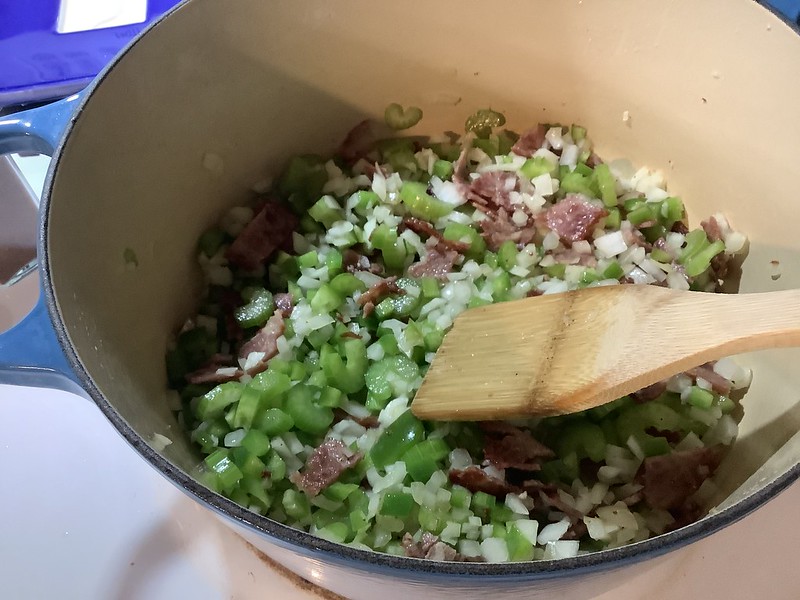 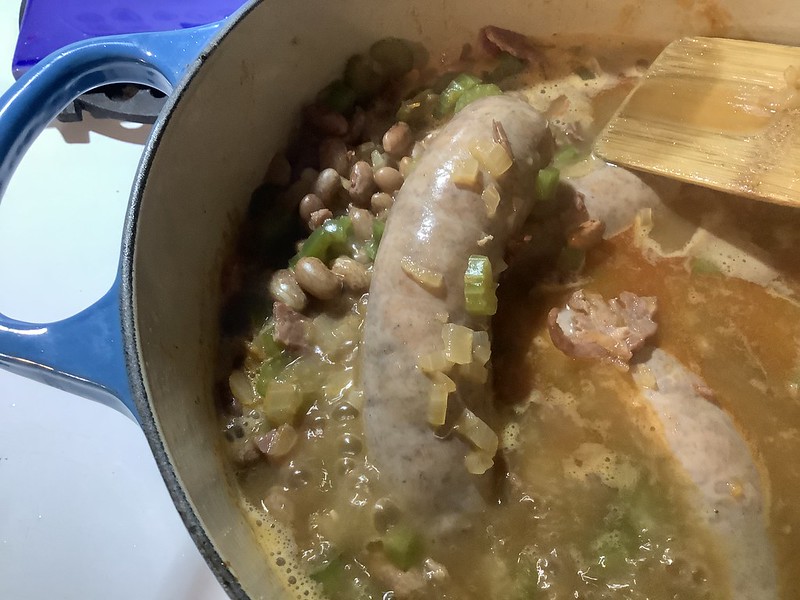 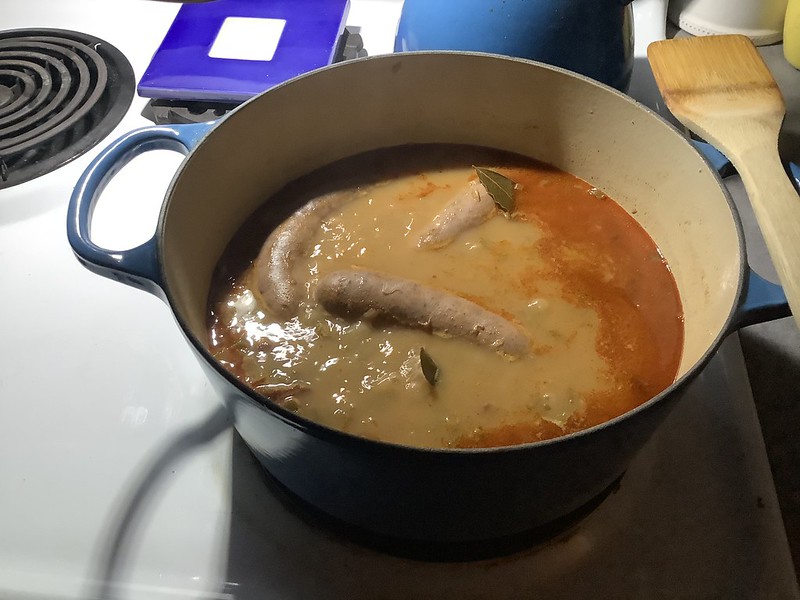 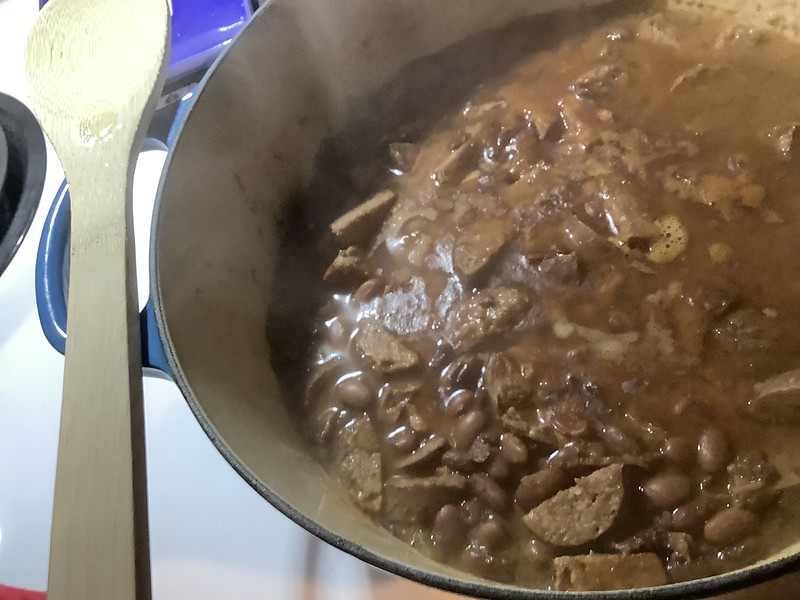 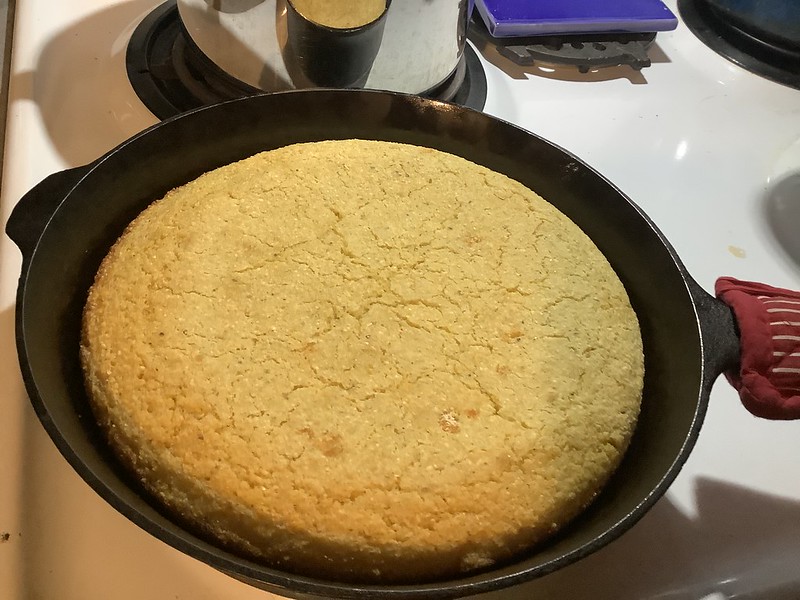 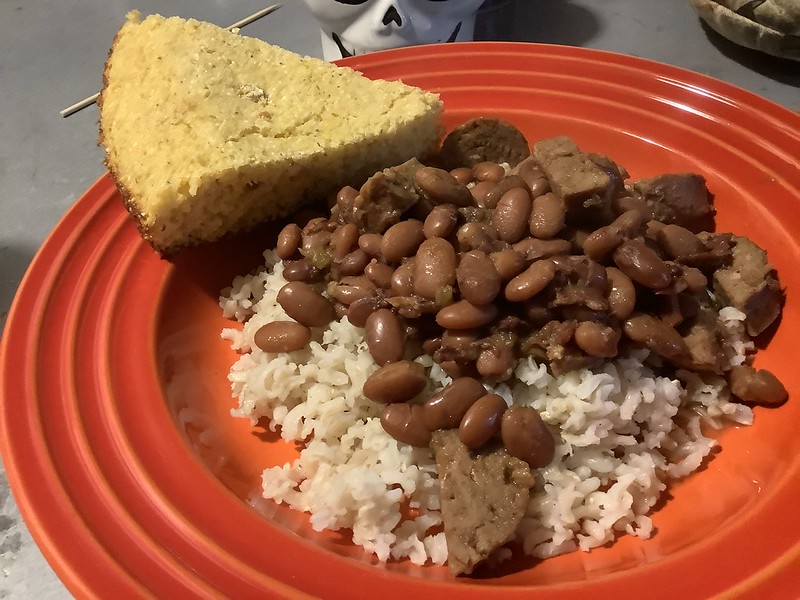 Dang man you are to far away I would stop in for lunch with a meal like that. Like everything in the dish and oh yell corn bread.

HalfSmoked said:
Dang man you are to far away I would stop in for lunch with a meal like that. Like everything in the dish and oh yell corn bread.

Thanks! Your not too far away, only 40 hours by car!

Hey give me a weeks heads up next time and I'll see if I can make in time for dinner.