Earlier this year I purchased a whole purebred Red Angus with a few buddies from work so I ended up with a half of a half. I decided to have the butcher leave the short ribs for me so I could try smoking them. I also had 4 small short ribs leftover from when I decided to buy some from my local university.

I trimmed any excess fat and silver skin from the ribs. I noticed during my trimming that I had one smaller rib that really didn't have any meat on it at all and was essentially all fat so I threw that one away. Now, I'm absolutely not an expert on beef ribs and I was noticing that some ribs had a ton of meat on them. Then others had a thin part of meat on top, followed by a huge chunk of fat running all the way through followed up by another piece of meat. I was kind of confused by these but went ahead and cooked them anyways then just removed the fat afterwards.

Once all my ribs were trimmed up I started prepping them. I was planning on doing a bourbon mop/bath for one set of ribs while doing a red wine mop/bath for the other set as both sounded really good. For the bourbon ribs, I mixed together some yellow mustard, Worcestershire, and maple syrup then slathered that onto my ribs. For the red wine ribs I rubbed then down with EVOO. I used my standard beef rub, which consists of SPOG, Lowry's, paprika and celery seed, on both sets of ribs.

The red wine mop that I used was wine, beef broth, butter, some of my beef dry rub and Worcestershire sauce. The bourbon mop was beef broth, soy sauce and Buffalo Trace bourbon.

I smoked the ribs for a little over 4 hours with a mixture of cherry and hickory wood with Royal Oak lump charcoal. I spritzed them with an apple cider/apple cider vinegar mixture during the smoke, before I removed them and put into aluminum pans, poured on the bath/mop for each one, covered them in foil then returned to the smoker for a couple of hours to finish.

The cooking process was one of my more labored smokes. Normally I can get my UDS set to a specific temp and it will hold it fairly consistently throughout a good long smoke. But for some reason this day I had all sorts of issues maintaining a consistent temp which got a little frustrating. It was definitely windy that day and the wind direction seemed to keep changing so I was checking the temperature of the pit more frequently than normal.

Overall everything turned out great, the ribs were nice and tender had a good smoke flavor even though I was disappointed in my smoke ring. I definitely preferred the bourbon ribs over the red wine ribs, they really reminded me of burnt ends. If I could get some good, meaty beef short ribs again I would definitely do the bourbon recipe for all of them.

Ribs trimmed and ready for seasoning 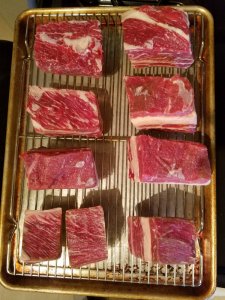 Seasoned and ready for smoker 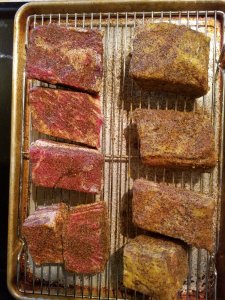 Mustard/Bourbon ribs ready to be wrapped and mopped 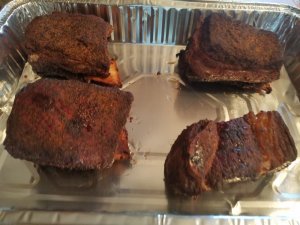 EVOO/Red Wine ribs ready to be wrapped and mopped 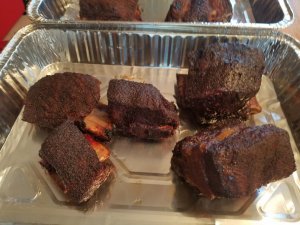 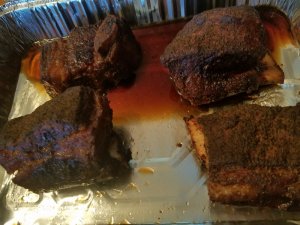 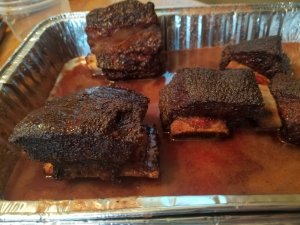 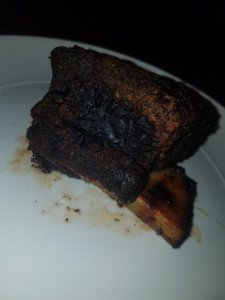 Bourbon rib cross cut, this one had a little bit of fat running through it. 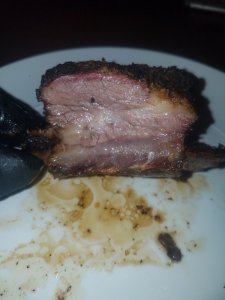 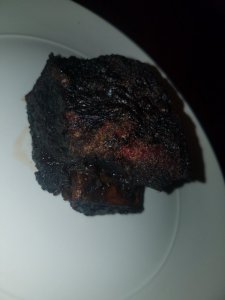 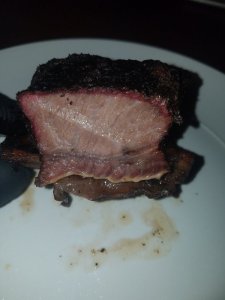 They look good to me.

Beef ribs are addictive when they're done right. I'm jealous I have none in the freezer right now. Looks great!

Great job !!! I just love the way they end up perched on top of the bone and scream "eat me"

zerowin said:
Beef ribs are addictive when they're done right. I'm jealous I have none in the freezer right now. Looks great!
Click to expand...

I would completely agree that they are addictive. They seem to fill my craving for burnt ends/brisket without having to cook a whole brisket.

That means a lot coming from a master like yourself! Thanks!

Thanks, I do my best to put some detail into my posts to get some feedback if I'm doing something wrong or if there is a better way to go about it.


troutman said:
Great job !!! I just love the way they end up perched on top of the bone and scream "eat me"
Click to expand...

It was hard to get pictures of them without devouring them while doing so, congrats on the World Series Championship.
G

nice looking BBQ there ... not crazy bout your signature though .. points to you

Super shortribs, Sir. I wouldn't want you to suffer with the wine version. Let me take care of them for you! Point!

I just registered to this site this morning, it's been about 3 hours now...I'm officially starving! lol

DD Alberta said:
I just registered to this site this morning, it's been about 3 hours now...I'm officially starving! lol
Click to expand...

I need to warn you. This site causes a serious smoking addiction. It is too late for me. I am doomed to continue making great food. It's not too late for you. Run while you still can!
You must log in or register to reply here.
Share:
Reddit Pinterest Tumblr WhatsApp Email Link