Burning dust in the AMNTS

Since seeing Dave's post on making / using dust , I wanted to try it out . Doing the wet method made it a little fine for the tube . So after thinking about it I remembered I had a hand crank grinder that I only used once . That was enough . Worked pretty good for what I wanted . To passes thru the biggest plate I had . First time thru takes a bit of back and forth . Second time was pretty easy . Leaves big enough pieces that it don't all fall thru . 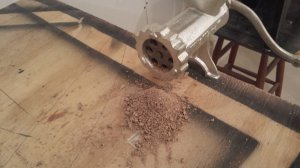 So as a test I filled a 6" tube about half way , and lit it . Put it in the mailbox . Acted like it didn't want to burn , so I moved it into the smoker itself . Not much difference . Went about what I was doing . Came back an hour later to nice , slow , clean blue smoke coming out the exhaust . So I thru a couple pieces of white bread in to test the color . I was surprised that at half full , smoker temp was 100 or so ,,, it burned for 4 1/2 hours . Nice and steady . Got some nice color on the bread . These were hickory pellets ground down . 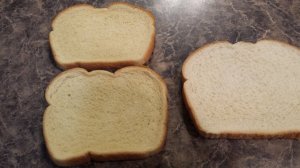 So the next day I used some chicken legs . This time I filled the 6" up and put it in the smoker . Smoked the legs at 250 . I think they took some nice color . The smoke is really light compared to what I'm used to out of the tube , but like the results . 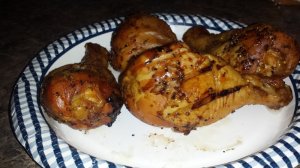 Need to do some more testing and keep track of burn times .

Had one of them chanks years ago (okay Ages)
Nice I have the tray and I haven't had a chance to use the dust I made.
Richie

I'm sold on the dust method of smoking.
To me, it seems like it is milder flavored as well.
Or at least, much easier to judge.
So, how was the smoked toast?

tropics said:
Had one of them chanks years ago (okay Ages)
Nice I have the tray and I haven't had a chance to use the dust I made.
Richie
Click to expand...

Probably when you were a young shaver like that elf in your lap... :)

SonnyE said:
So, how was the smoked toast?
Click to expand...

You know I tried it . Gave me thoughts of smoked croutons for my once a year salad .

Lol, I like the idea of that chopsaw. I have not been around home enough to get that done and off the todo list. But I am writing it down now.

chopsaw said:
You know I tried it . Gave me thoughts of smoked croutons for my once a year salad .
Click to expand...

Your yearly trip to the dark side?

Nice idea and even better results.

I'm going to have to try this myself.Will have to see how it works with the u-bolt mod.

normanaj said:
I'm going to have to try this myself.Will have to see how it works with the u-bolt mod.
Click to expand...

I have the u bolts on mine , but just on the front . 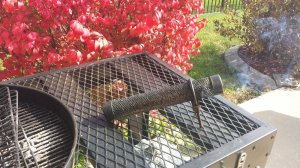 Looks like I need to start grinding up some pellets then!

Norm , let us know how it works out . I need to do some more runs to see how long it burns .

chopsaw said:
Norm , let us know how it works out . I need to do some more runs to see how long it burns .
Click to expand...

I'll be loading up the smoker Tues morn.I will let y'all know how it worked out.

Chop, let us know how the grinder holds up after a few uses.

Will do Chris . As long as you let the tool do the work , I don't see a problem , but if it's something that holds other value I wouldn't use it for this . My original thought was a manual coffee grinder .

Yeah I was just wondering how the gears that do the actual grinding would hold up to wood. I think it's a great idea and I can get hold of an old 1950's or so manual grinder that my in-laws have. I would just need to insure the wife that it wouldn't break.

No gears involved , just auger , blade and the die . I don't think a smaller die would work , so keep that in mind . I would grab that grinder and keep it for the family value .

No way in hell I'm going to be allowed to use the wife's KitchenAid grinder attachment,that was shot down immediately.

I really want to try this Tuesday but I need to come up with a grinder or alternative way to get the consistency you did chopsaw.Started thinking blender,food processor or coffee grinder but can't try that either as they are all off limits.The third beer isn't really helping my cause either!

Fill up an old sock and tie a knot in it . Run it over with the car a few times .