I know this has probably been covered a dozen times before but I couldn't really find an answer in the search.

I was smoking last Sunday in Ohio, it was sunny and in the low 50s with minimal wind, and trying to do 2 racks of baby back ribs. I have a large (22.5") Weber Smokey Mountain, brand new, and the water bowl was about half full (I don't completely fill because I don't have a garden hose on hand and also I found that setup/cleanup is harder when it's all the way full -- this was only my second cook and I was experimenting). Top vent was 80% open, bottom vents were all about 20% open.

However my dome temp was showing about 250 degrees, while my top grate was at 300 degrees. Now I'm not one to fuss over small details, but this just seems way off of expectations.

I gauged grate temp using two Maverick Redi-Check probes. I calibrated them after the cook in a cup of half ice and half water and both were reading at 39 degrees (I also had a regular non-digital probe thermometer in there that was showing the same), so it seems like these are accurate. However I should note at the start of the cook both of the probes, which were clipped to the grate and right next to each other, were about 50 degrees off. (I did not put them through the rubber grommet. Rather I just ran the wires underneath the lid and kept the transmitter on the lid handle). The temperatures came together over the course of the cook (both between 280 and 300), but I wonder if there was some thing off about them because of the fact they were so far off to begin with.

I used the minion method with Kingsford professional charcoal.

It was only the second session on the WSM, and I experienced the same "issue" the first time (also baby backs).

Can anyone explain why this might be happening? It seems like my personal experience is so far off of the expected experience that I read about on the internet. I've heard that dome thermos can sometimes be inaccurate, but this seems way too far off.

By the way, I smoked the babybacks for 3 hours until the bark was to my desired level (a good golden brown, not looking burnt or black or anything), then an hour in foil, then another hour on the grate, and still I needed more tug than I hoped for to get the meat off the bones. They were very meaty which I think explains it, but is it possible I overcooked them? 3-1-1 for babybacks at 300 degree surface temp seems a long time for them to still be underdone.

Thanks for any insight.

Factory temp gauges are for show,they are never accurate.Try doing the boiling water test for the probe rather then ice you are cooking not freezing.
Try filling your water pan with sand,lava rock and cover with foil.This will save on clean up and give a better tasting meat.
Your location would also help us to help you
Welcome to SMF
Richie

Hmm.. you should use boiling water from a tea kettle to fill water pan.
If you had both racks of ribs or whatever on the top rack and the probe in the center between but not touching the ribs, that would be best readings. Then you have to go out and adjust the bottom vents accordingly.. I would leave top one open to let steam or humidity out better.

Sounds like your close to getting it done right.. now the WSM is broke in nice..

Rings Я Us said:
Hmm.. you should use boiling water from a tea kettle to fill water pan.
If you had both racks of ribs or whatever on the top rack and the probe in the center between but not touching the ribs, that would be best readings. Then you have to go out and adjust the bottom vents accordingly.. I would leave top one open to let steam or humidity out better.

Sounds like your close to getting it done right.. now the WSM is broke in nice..
Click to expand...

Boiling water in the pan... never heard that one before!

I had the probes actually down near the bottom of the ribs, and not in the middle. Will need to adjust that.

If I leave the top vent wide open, I find that the temp gets a little too hot inside. I close those bottom vents basically all the way but I'll see if I can tighten them some more.

Thanks for the feedback.

I never go off of my dome temp, that temp gauge is junk. I just stick a probe through the rubber grommet and go based off of that and never had an issue. I also dont put anything in my water pan and just foil it for easy clean up. Never had an issue holding steady temp.

NJZ, As stated above don't worry about your dome therm. They're known to be off kilter. It sounds like you did most everything correctly. I would add leave your top vent fully open unless you really need to choke down you smoker. Also bring the WSM up to temp and let it stabilize a little before putting your meat on. If your shooting for 250* let the WSM heat up to 260* for 15 min. Put you meat on and check it again in 15min. adjust bottom vents as needed. If you don't have a thin tipped probe then checking the temps in ribs is really tough. I would suggest using the bend test to see if their done. After you see good pull-back on the bone(maybe 1/4inch or more). Grab the ribs with your tongs about half down the slab. If they bend almost straight down w/o breaking then their done. If you want FOTB ribs then let them cook until they start breaking off during the bend test. After a few smokes you'll know where your smoker likes to settle in at. Also I cook without water, sand or anything else in my water pan. Just foil, it's a matter of personal preference and what works best for you.

Thanks all for the 'grate' feedback.

Considering I was running at 270+, does anyone think it's weird that I didn't get my bark on babybacks until about 3 hours? Here's the pic right before I foiled. 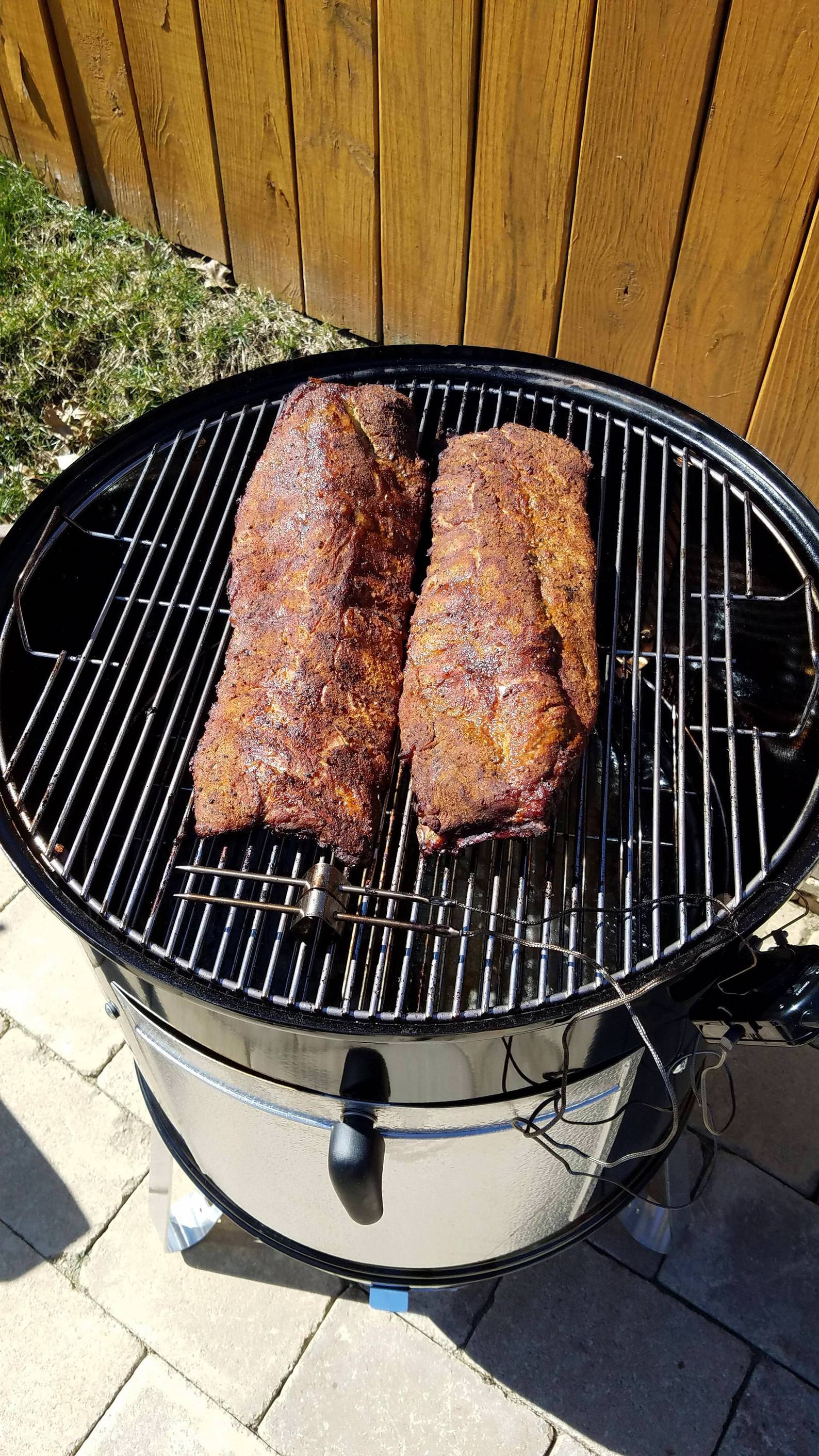 It may have something to do with your rub mix, but it probably has more to do with the higher heat and shorter smoking time. 3/2/1 and 2/2/1 are usually smoked at 225*

Yes hot water so your temps stay the same from start to finish. Your smoker won't have to hear the water . Same goes for adding some water later.
Try doing some ribs with no water. Just cover the pan with foil . Bunch of people never use water at all.

My mother, may she rest in peace, once told me "You think too much." It's both a curse and a blessing.

There are temp differences in the WSM. It is not uniform. Water helps, but I dry smoke. I now pay close attention to how I lay out my meat, and where the top vent is located. I also have switched where I put my Mav and Guru chamber temp probes.

For $14, replace the therm that came with the WSM. It is trash. Buy a $14 River Country 2" therm and a 9/16" drill bit. Drill out the existing hole in the lid and never have to worry about lousy chamber temps again. The 2" fits nicely in the existing WSM therm housing.

In a WSM dry smoke, the top grate will be hottest right under vent. Hot air rises and will seek the path of least resistance to the exhaust. Since the vent is offset, and opposite the lid therm, where you put your chamber probes can make a difference. Your gut may tell you to put your temp probes right under the lid therm. In most cases, an accurate lid therm will read hotter than the probes. Why? Heat is rising toward the vent. Not all of it makes it out the vent and mixes across the top of the dome, then sinking down toward the grate. It is losing heat energy the entire time.

I now place my probes about 3" from the outside of the grate directly under the top vent. I'm usually within 5F to spot on with the lid River Country lid therm on both my Mav and my Guru.

For turkey, I put the breast pointing away from the vent side. I do 6-8 turkeys a year. Once I started positioning the turkey like that, I stopped getting inconsistent breasts.

For brisket, I put the flat away from the vent, the point nearest the vent.

For one butt, I put it on the opposite side of the vent.

For a full smoker on a long smoke, I'd rotate the lid. Haven't had the need to do so yet, but will this summer.

When making jerky at a low temp of 150-165F, I usually use both grates, but I remove the bottom grate, put two cement bricks on the top grate. Fill the top grate with meat, put the chamber probes right in the center of the grate, then put the bottom grate on the bricks. Then I load the grate on the bricks with more meat for jerky. The lid still fits nicely. I don't use the Guru when making jerky and the location of the top vent doesn't seem to make much difference at that low chamber temperature. Most likely due to the two big heat sinks I put on the top grate.

Give it a try. See if it works for you.