So thanks to COVID I’ve got a 20 pound turkey for three people. I proposed and it was accepted that I’ll cook one breast for dinner and have the other breast, both legs/wings/thighs to play with.

Totally open to other ideas, though? What would you do? What about cured and/or smoked with some chipotles and cranberries mixed in?

One thing to consider. After a turkey smoke I take the left over carcass scraps and make smoked turkey salad. Eggs, mayo, and the turkey meat. O so good!!!!!!

jbo_c said:
So thanks to COVID I’ve got a 20 pound turkey for three people. I proposed and it was accepted that I’ll cook one breast for dinner and have the other breast, both legs/wings/thighs to play with.

Totally open to other ideas, though? What would you do? What about cured and/or smoked with some chipotles and cranberries mixed in?

Hi there and welcome!

You could that, you might not end up with as much meat as you think for grinding and making sausage once you debone it and grind it.

I would suggest you part out the wings, legs, back, and other breast and cure them in brine and then smoke them to get state fair like smoked turkey parts for wings, thighs, and drums.
The breast will come out like sandwich meat which you can slice and make sandwiches out of.

With the smoked wings and back you can throw them in a pot of beans, soup, or chili and let them cook till it all falls off the bone.

The thighs and drums i would eat like state fair options. You will be amazed at how awesome cured and smoked thighs are over drums, it blew me away!

We make Turkey gumbo with our leftover turkey. But now I'm thinking maybe doing a pot pie with it. Do you make a dark or white gravy for the pie?

indaswamp said:
We make Turkey gumbo with our leftover turkey. But now I'm thinking maybe doing a pot pie with it. Do you make a dark or white gravy for the pie?
Click to expand...

Made white this year. Took the turkey carcass and veggies, made a rich stock. Then made a roux to thicken it up.

I got a recipe here from TX Smoker and it is good! The wife got a deal after thanksgiving on Turkeys and then was not using them.

So I am digging in the small side by side freezer and moving stuff around and an entire shelf is stuffed with 2 whole turkeys my wife bought after Thanksgiving. One is 16# and the other 15.25# eating up room. She got talked into buying them because they were $4 each just about and she figured we would make turkeys during late winter, but she never got to that. Then I asked her about them.

Rob: “When are you going to make those turkeys just sitting on the shelf and taking up all the room for my processed game?
Trish: “I’m not feeling making turkeys. They take so long to make and its all you eat it all week long. I just don’t want that.”
Rob: “Sweet, then they are mine and I am making Turkey sausages! I just saw a turkey sausage recipe the other day”
Trish: They’re yours, but I want to see the recipe first.”

She approved of the recipe and I started thawing the turkeys to cut them up. 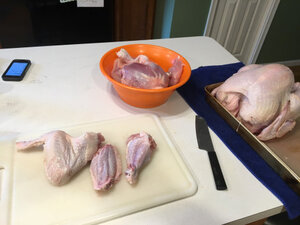 Above there is one turkey still whole on the right and one cut up in the bowl. The first one I cut up both legs and both thighs. The second one I only cut up the thighs. The legs make meat, but they are a PITA to cut up. 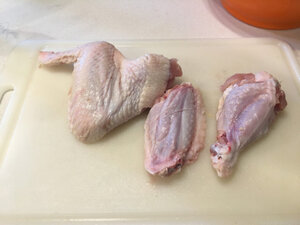 The turkey wings are tough to cut up and I got the, Hmmm … This might be diner later on. 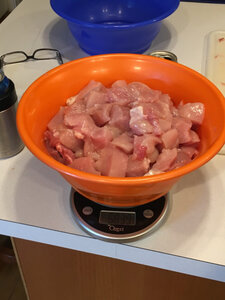 Above is the first one cut up where I used both legs and one upper wing. The second was was about 5 pounds maybe more. I ended with about 12 pounds of meat and I cubed it all and used 3 pounds of pig fat to make the sausages. I par froze, ground and so on and I am not covering all that right now.

I did not take a picture of it, but I rested the meat in the fridge once cubed. It was tired and I was all too happy to rest with it. The next evening there was water collected up in the spaces. I drained it off, but apparently they are putting turkeys in to pressure chambers to force water into them too for weight. I have never had water drain out of game meat like this. 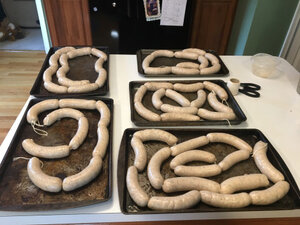 The sausages all stuffed and I used the Home Pack hog casings this time. They are true hog casings, but they are the scrapes. They work, but they are cheap and sometimes rip and are a lot shorter pieces. A good learner pack, but not a real professional pack. I got 56 total sausages from that 15 pounds of meat. We ate some for lunch a few days later and at 20% fat they are juicy and healthy. They are a bit more stuck together like processed meat and not the same texture as pork sausage, but still darn good. The recipe is at the end, … if you’re in a hurry. They are stuffed in hog casings, in case you can’t tell. 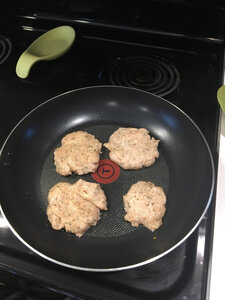 Then there is the always to be loved, the left over pan fry test. This was awesome! It is very sticky and hard to shape being sticky, but these could be turkey burgers if that is what you wanted them to be. I didn’t have rolls and it just broken them apart and made the disappear! 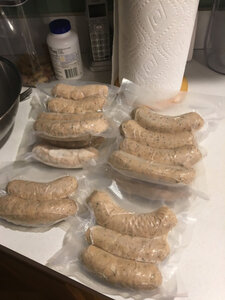 Here are some of them vacuum packed into 8″ bags to reclaim their space in the freezer.

Now for the Bonus. I think I butchered on Monday, then ground twice and mixed the spices on Tuesday and it was getting late to stuff. Wednesday I stuffed and par froze the sausages to vacuum seal and while par freezing It was time to fry some turkey wings! 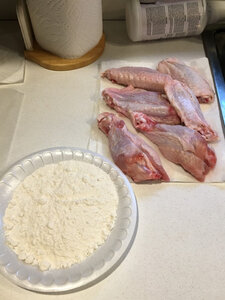 Here is the wings ready to get done. I only had 6 I didn’t cut up and 2 for me, 2 for Trish and 2 for my daughter were plenty. 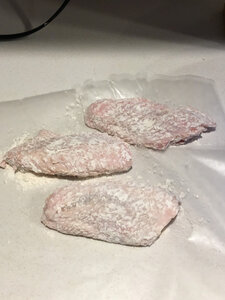 Half floured waiting for their dip. 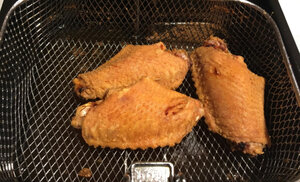 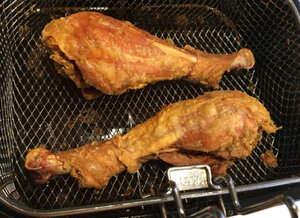 Thursday my daughter was out, so I floured the turkey legs and gave them a dip. Trish and I had them with a side that was siting in the fridge.

I can’t take credit for the recipe, which is awesome, I found it on smokeingmeatforums by a user tx smoker. The plan and recipe looked good and Trish approved, so off we went. I left his direction which was for 5# on here and the 15# which I did. I left both fat content calcs visible also.