If there was an "Insane in the Kitchen" area, that might fit.
This mess has Sous Vide Pork Loin, but that doesn't fit.
It has some fried up Buckboard Bacon, but that doesn't fit.
It has Black Beans, but that isn't all.
And Chili Powder, Chipotle Powder, Cracked black peppercorn, and even a big squeeze of Sage Honey.
Sonny's Secret Seasoning, Granulated Garlic.
And a can of dice tomatoes...

Brings to mind Julie Andrews singing, These are a few of my Favorite Things.


I browned the Pork Loin I Sous Vide yesterday, in the bottom of my Dutch Oven.
I fried up some bacon in the lunch quesadilla pan, nothing is sacred around me man.
A run away train wreck is bubbling away.
But the end result is tasty, even I must say.

Why I never compete is quite obvious,
Wouldn't you agree?
I eat my mistakes, but never ate my young,
Just another tasty treat from Sonny in the Kitchen

Cut up the Sous Vide Pork Loin into cubes ~1/2" to 3/4" (Give the dog any skimpy scrapy odds and ends.)
Brown the cubes in the Dutch oven (or pot) on your range, to your liking. Add the chili powders. Stir around good to get the powders on the cubes. I use a dribble of Peanut Oil to lube things up.
Add your Black Beans and stir around. The first can is going to sizzle, the second will bubble, and the 3rd will settle things down. Now we're cookin!
I stir mine up with a wooden spoon to respect my cast iron. You can use whatever is your favorite.
As the Beans and Pork Loin are coming to a boil I added the other ingredients as things came to mind.
I fried up the bacon, cut into diagonal slices until some was kinda crispy, and the others were still soft but cooked. In to the pot, grease and all. (Shoulder Bacon is meaty, and not much grease is made. But it's tasty!)
The last thing I added was the can of diced tomatoes. It was one of those "Oh Yeah, tomatoes!" Moments. So I got out a can from the box high on the top shelf that I had gotten chastised for buying.

Stir, stir, stir, and stir. But be gentle, Please.
Mine is simmering. Only the occasional bubble from the bottom. The flavors were kind of stark at first, but as time did it's thing, everything began mixing and blending, and my smile got bigger and bigger.
Taste good to me! 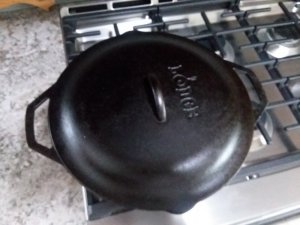 Yummie to a Rainy Day Tummy!

Main ingredient is Pork so there you go. Sounds and looks good to me...JJ

OK, Thank you JimmyJ!
I recon with double Pork, the Pork Section is probably as good and any.
Thanks for correcting my brain fart. LOL!

You had me at "Double Pig"

Preacher Man said:
You had me at "Double Pig"
Click to expand...

I'm almost as loose with my measurements as you are. But didn't need a handful of brown sugar in this.
The Pork is falling apart, melts in your mouth good!
A bit spicy, but my little buddy likes too. So it must not be too spicy.
Probably to much zing for Grandma though.

Looks tasty and a nice dish on one of our cold winter nights.

Point for sure.
Chris

gmc2003 said:
Looks tasty and a nice dish on one of our cold winter nights.

It was one of my, "I'm gonna just do this and see how it comes out" moments.
The pre-Sous Vide pork loin turned into fall apart in your mouth yummy goodness.
Before a long simmer, I thought "Oh No, too much heat", but everything mellowed and tasted so good!
I loved using my dutch oven for this. I don't get to use it enough.
You must log in or register to reply here.
Share:
Reddit Pinterest Tumblr WhatsApp Email Link