Sorry that this is my first post, but a situation has arisen and I'm not sure who else to ask.

This weekend I'm putting together a going-away-party for a friend of mine. He's a fan of 'critter' (i.e., just about any meat), especially critter cooked Texas BBQ style, so I offered to smoke him a beef shoulder clod. He jumped at the offer. On top of it, he has a cousin who is a butcher, and he offered to ask him (his cousin) to see if his cousin can procure the clod. Now, this will be the first time I've done a clod, and I don't have any butcher shop off the top of my head to procure one, so when my buddy said his cousin was a butcher, I was like "great."

So, my buddy's cousin dropped off the clod with my buddy today. My buddy calls me, and tells me he's going to drop it by my house tonight (I plan on beginning the smoke tomorrow evening). My buddy then says, "Oh, my cousin also dropped off a brisket. Wow... there's a lot of meat here!"

So, you're probably wondering what the issue is. Well, for starters, I was thinking the clod was more than enough to feed the guests (approx. 15), so if I cook up the brisket too, there's going to A LOT of leftovers. Second, I'm not sure if my smoker is big enough to handle both the clod and the brisket at the same time. I have an OK Joe's Longhorn... it might be able to get the job done. I haven't seen the pieces of meat yet (just that my buddy says "they're yuge"), but in the event I am unable to smoke them together, is there anything wrong with simply freezing the raw brisket? I've got a deep freezer, so that's not an issue. I just know that's a huge chunk-O-meat, and I'm not sure if freezing it would be the best idea. Granted, I freeze meat all the time, so I'm probably over-thinking this.

Nothing wrong with freezing. Make sure it is cryovac or vac sealed to maintain freshness. And welcome to the forum from Tennessee

Reheating smoked meat brings out the smokyness well. Don't be afraid to freeze and reheat it!

Freezing is no problem, provided you protect the roast, vacuum sealing is best, but plastic inner wrap with freezer paper will be fine for 3 to 5 months.

It's nearly impossible for me to get a shoulder clod, so I might be temped to remove the brisket point to make burnt ends for a real barbecue fest...., and freeze the brisket flat for later. If you decide to freeze the whole brisket, consider trimming it first... it will take up less room in the freezer, and be ready to rock when you finally thaw it.
C

So, the meat arrived a little bit ago. Clod is on the left, brisket on the right. Both are cryo-packed, so I could simply throw the brisket in the freezer. However, looking at their size, I'm sure I could smoke them both together on the Longhorn. I've got the number of people to feed at around 20 now, but still, there will be definitely leftovers! And that's if all I did was smoke the clod.

Oh, did I mention that I'm in Minnesota, and that we're going to be having a blizzard tomorrow and Saturday? This is gonna be fun!

I'll try to document the best I can and share here once done. 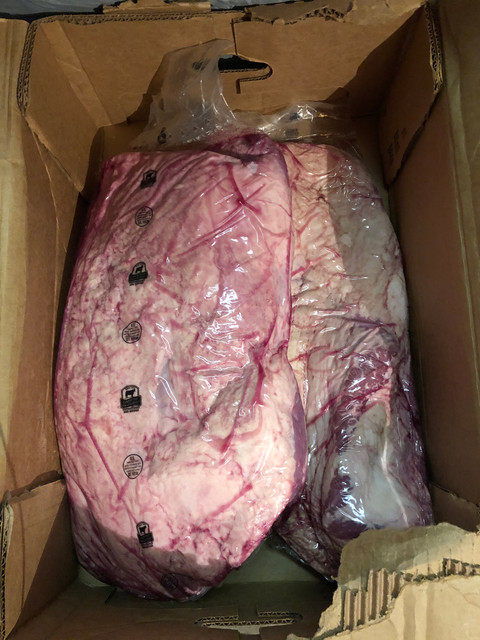 If you figure 8oz per X 20 X 0.5 yield = 20 pounds raw beef needed. Some eat more, some less. DO NOT break the seal of the Brisket if you freeze it. You want that Cryo-Vac protection. My apologies but, Trimming a Brisket of Fat, reduces weight but has little effect on the physical size. It's not worth breaking the seal to trim it of fat...JJ

Looks like you are off to a good start. Have you researched cooking methods for the clod? There are two schools of thought lo-n-slo, which can take 20 hours or so to reach 180° internal if your roast is in the 20# range. And hot-n-fast which is popular in some of the Texas hill country BBQ joints. In fact I've had some which was cooked to about medium and it was pretty tasty, but I prefer a bit higher internal... but still sliceable. You will get some pullable off the narrow end.
C

thirdeye said:
Looks like you are off to a good start. Have you researched cooking methods for the clod? There are two schools of thought lo-n-slo, which can take 20 hours or so to reach 180° internal if your roast is in the 20# range. And hot-n-fast which is popular in some of the Texas hill country BBQ joints. In fact I've had some which was cooked to about medium and it was pretty tasty, but I prefer a bit higher internal... but still sliceable. You will get some pullable off the narrow end.
Click to expand...

I'm planning on going lo-and-slo, in the 225° range. Putting the 23lbs clod on at about six tonight, and the 13lbs brisket roughly six hours later. Depending on how the smoker is going to react with the weather, I may just bring each up to the stall and then wrap and transfer 'em to the oven to finish. Would prefer to get the clod in at least the 185° range, and the brisket in the 205° range, checking on tenderness for final result.
Last edited: Jan 17, 2020
C

I "fitted" the two cuts into the smoker, and I believe it's big enough to do them both, so I should be GTG. Plus, the clod will be on the smoker ~6 hours prior to the brisket, so it should shrink from it current size. 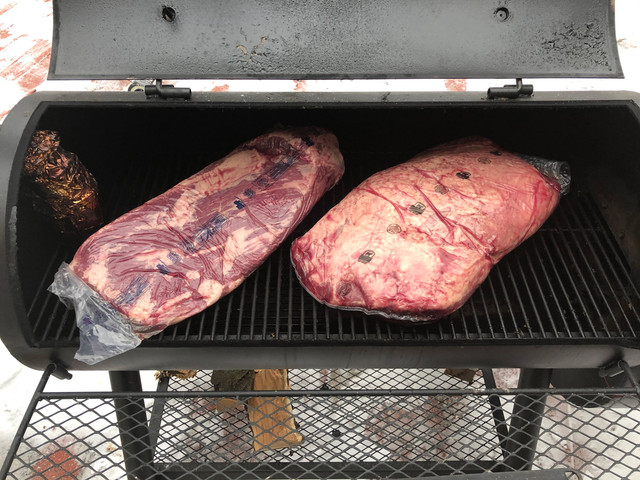 But.... the temps! It's warmed up a little bit from this morning when I took that photo... but not a lot. 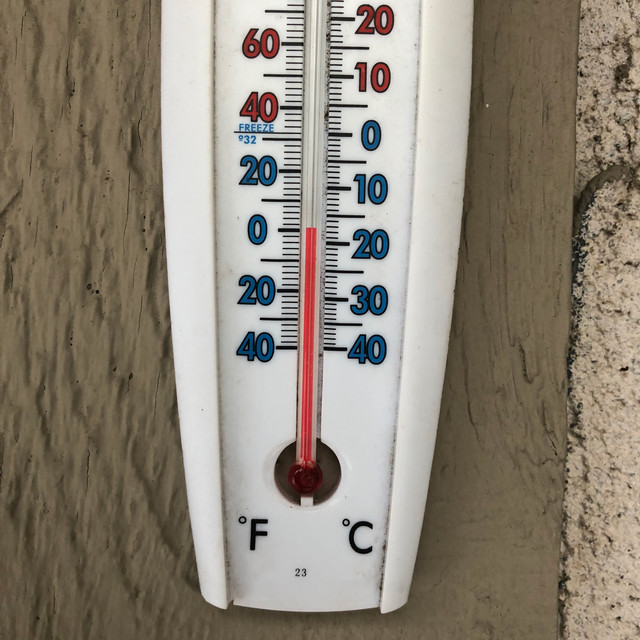 Oh, did I mention we're set to get a blizzard!? Started snowing about two hours ago. This should get interesting. 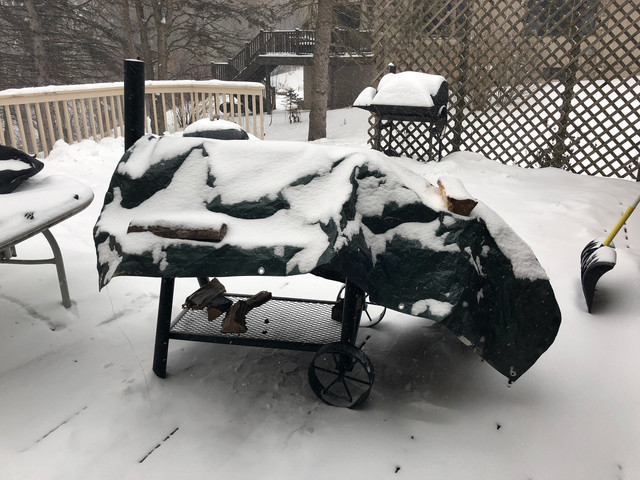