TNJAKE said:
Looks amazing rich! I have some umai stuff but haven't given it a try yet. Nice work bud
Click to expand...

Thanks Jake . Now's the time to do it . 2 weeks in the cure and 4 to 8 weeks in the Umai .
I just got out a small sirloin roast to use up my last bag .
Reactions: indaswamp

zwiller said:
If you want an idea, how about side by side UMAI bag VS 2 layers pink BP.
Click to expand...

Lol . You know me to well . I just wrapped the half I didn't slice in pink paper and put it back in the fridge . I should take a weight .
Not sure how long I can stay away from it .
Reactions: zwiller

motocrash said:
Picture perfect prosciutto pal!
Man, I can almost smell the goodness from the pics.
Click to expand...

Thank you Bill . It does smell good . Taste is spot on too .
Thanks for lookin bud .

chopsaw said:
I just got out a small sirloin roast to use up my last bag .
Click to expand...

Yup . I always have something curing in that fridge , but not enough to dedicate a cabinet like you do . You do a great job with all that . I just keep it simple for me .

Those pork cushion come 5 to a bag . I actually did 3 . Two of them in Umai bags , and one cured with Tender quick . Ground ( to a powder ) fennel and anise added to the cure . Held for 14 days , rinsed covered with paprika and smoked to 152 . The TQ gives a much firmer texture than cure one . Makes a good sliced snack . 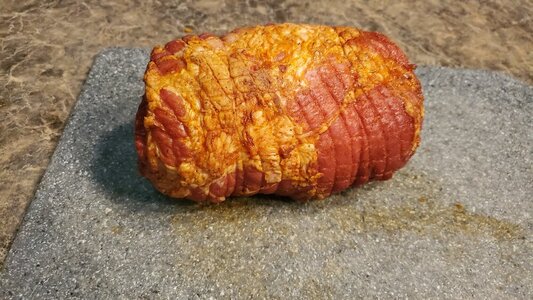 Didn't get the bind on the roll that I get with cure one .
Nice hint of sweetness from the fennel and anise . 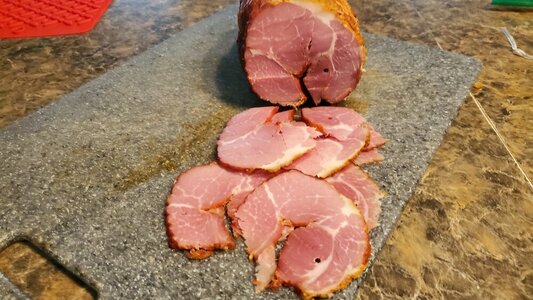 Update .
I've had the first one in pink butcher paper for 10 days .
Sliced it up this morning . Better texture and less moisture . 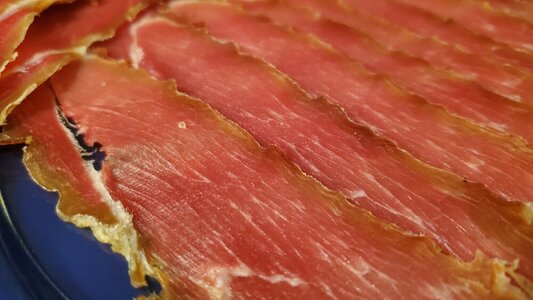 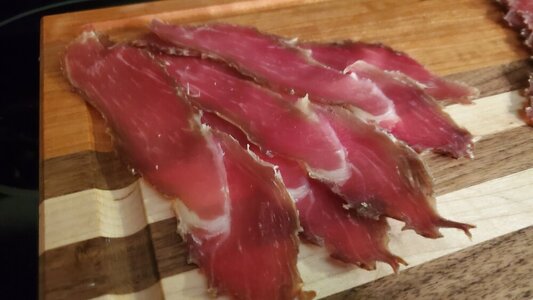 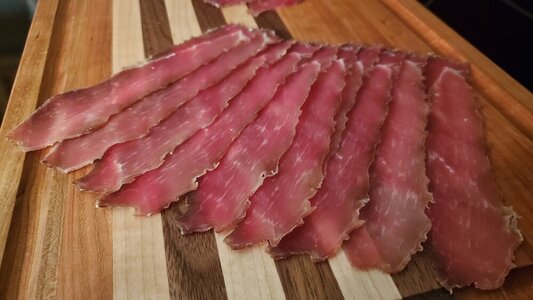 Since I had the slicer out I went ahead and pulled the second one that was still in the Umai bag . Started at 713g was at 400g this morning .
45 days . It was spiced with some red pepper .
Much better texture than the first one . This could have even gone longer . I did wrap in pink paper and it's back in the fridge . The outside was not as hard as the first one either . Maybe the time helps that . 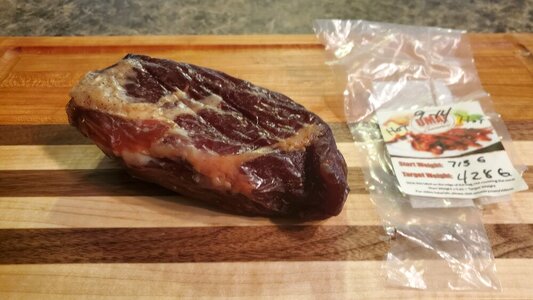 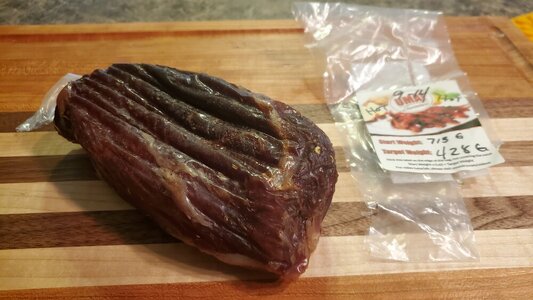 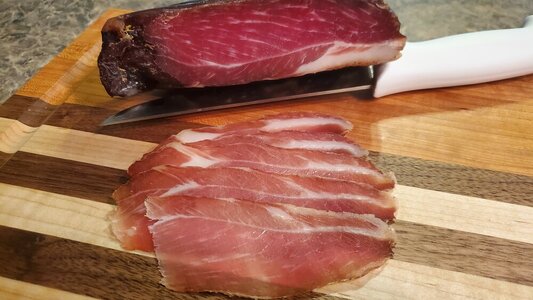 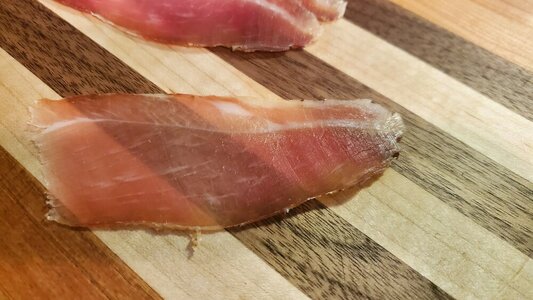 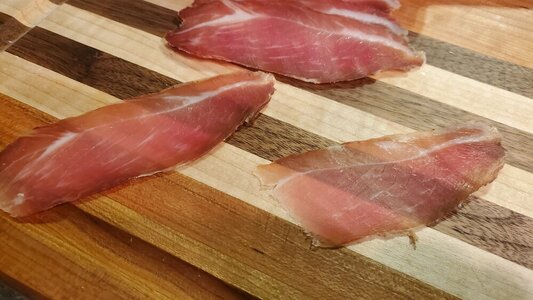 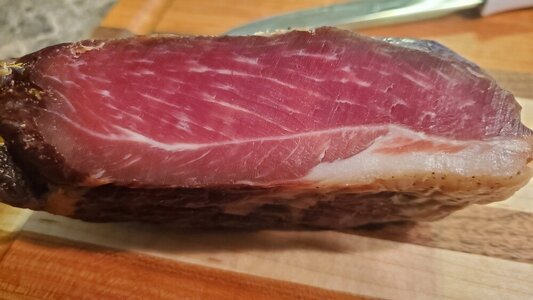 The first one was good , but a bit soft at 40%
After being in the Butcher paper it improved .
The second one is fantastic . Pork cushion is perfect for this .
Need to dig a couple out of the freezer .
I have a hunk of beef sirloin that has been in the cure 14 days .
Need to get in in the Umai today .

Looks really good! Some tasty snacking going on at your house.

Thanks Ryan . The longer time on this the better .
D

chopsaw wow that looks good! Thanks for all the details on UMAi, your results are the best recommendation for that method I've seen! I especially likebthe coppa!
I'm gonna have to do some research as I have never seen anything called a pork cushion for sale, and it looks like a nice cut.
Reactions: chopsaw

Dave in AZ said:
never seen anything called a pork cushion for sale
Click to expand...

Thanks for the comments . You can use what ever . Doesn't have to be cushion . Trim a hunk out of a pork butt .
Reactions: Dave in AZ

Man, does that look great.
I'd have to try a piece or three in a skillet too.
Reactions: chopsaw

motocrash said:
I'd have to try a piece or three in a skillet too.
Click to expand...

I did this morning . Just enough heat to tighten it up some . I didn't mention it , but if you saw the " country ham " thread , that's exactly what it reminded me of . That condensed salty chew . Just missing the smoke . I mixed up some dough right after that so I can put some on a pizza tonight . Bill , it's really good .
Reactions: zwiller, Brokenhandle and motocrash

chopsaw said:
Trim a hunk out of a pork butt .
Click to expand...

Thanks bud . Appreciate that .

Point for sure
Chris
Reactions: chopsaw

Thanks Chris . We have a place in town called Volpi . All the stuff they make is really good . Checked the price on the prosciutto . $9.00 for 3 oz.
Reactions: gmc2003

Man, everything is coming out fantastic Rich! I can't figure what I'm doing wrong, my coppa has lost about 8% in a month, this is the third one that isn't curing right. I just put it in a new bag with new strips, crinkled the bag up really good. This better work, getting tired of this crap, maybe it's the new fridge. RAY

chopsaw said:
Thanks Chris . We have a place in town called Volpi . All the stuff they make is really good . Checked the price on the prosciutto . $9.00 for 3 oz.
Click to expand...

Ray , I was surprised how good it is .

sawhorseray said:
maybe it's the new fridge.
Click to expand...

You may be right . This is the first time I did this in my garage fridge . Circa 1985 . Old Kenmore . First fridge I ever bought . When I did salamis I used a newer fridge and they took forever .
You must log in or register to reply here.