We had some nice weather in central Indiana the last few days and I couldn't wait to get out the Weber. First cook was wings but I'll touch on that later.
I had some Baby Backs thawed but wanted to try something more yesterday. I had a package of trimmings from my last batch of bacon and wanted to do something with it.
I decided to cut into small strips and use the same rub and sauce as the ribs. 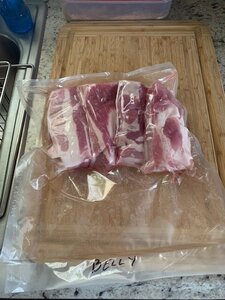 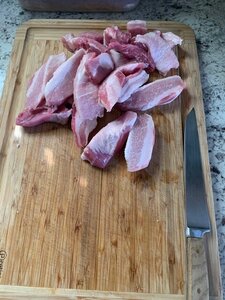 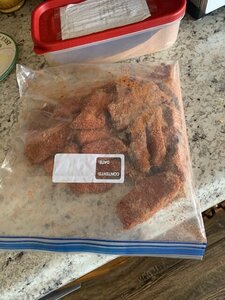 They went on with the ribs indirect with some Hickory chunks. 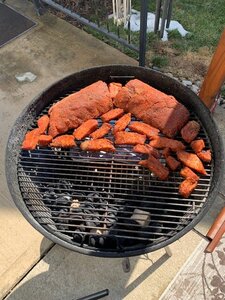 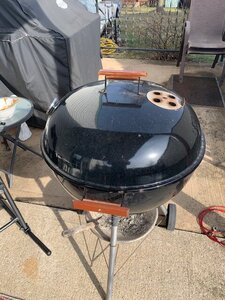 Cherry handles on the kettle courtesy of chopsaw :-)
After a couple of hours everything got foiled and cooked for another hour and a half or so. The belly fingers got sauced in the foil. The ribs just got a spritz of water. 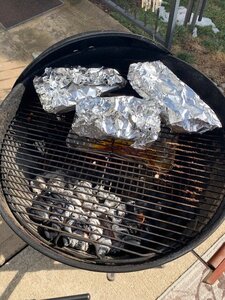 After un-foiling and saucing the ribs I pulled the belly fingers off. They were done. 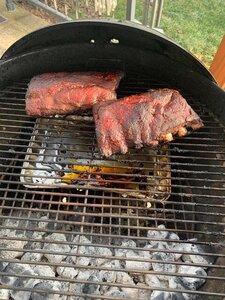 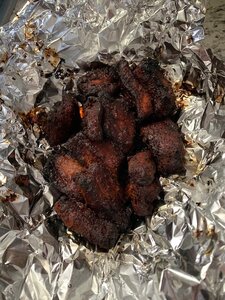 And tasty!
The ribs only needed another half hour or so. All done. 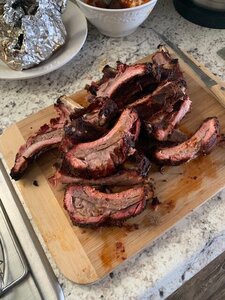 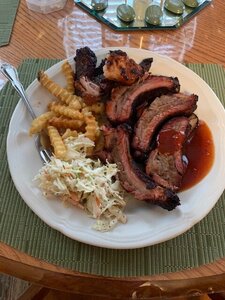 Bonus pics of my first cook of the year on Thursday.... 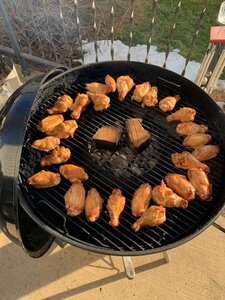 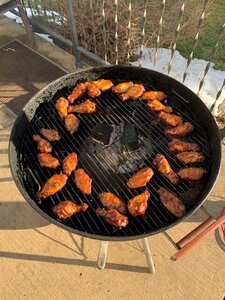 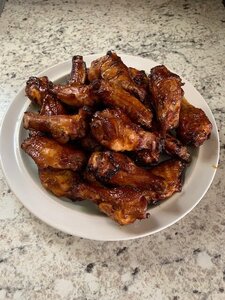 Sharing recipes for folks who like that (I do).

Pineapple Turmeric glaze (for the wings):
1/2 cup pineapple juice (squeeze the juice from one of those little cans of chunks and you get almost exactly 1/2 cup of juice)
1/4 cup honey
1/4 cup rice vinegar
3 tbsp Dijon mustard
1 tsp crushed red pepper
1/2 tsp sesame oil
1/2 tsp ground turmeric
Bring to a simmer and go 'til it's reduced. About 15 minutes. Let cool.

Sorry for the lengthy post, but I"m bored today. Although March can be a Bitch, Spring's almost just around the corner boys and girls....

Good looking meal my friend. Thanks for the pictures and the recipes.

Absolutely killer post Dan, everything is cooked to perfection, huge Like! The pineapple wing glaze looks to be a real keeper too, I'll be trying that out ASAP, got everything needed already here. RAY

Great looking batch of food and thanks for the recipes, i like that also, i like to read cookbooks and than try to incorporate things to make them my own. Does not always work .
But fun trying, the glaze for the wings sounds/looks great
David

Great looking food! Thanks for sharing your recipes and glad you got to enjoy your kettle again!

sawhorseray said:
Absolutely killer post Dan, everything is cooked to perfection, huge Like! The pineapple wing glaze looks to be a real keeper too, I'll be trying that out ASAP, got everything needed already here. RAY
Click to expand...

Thank you!
It's not actually my recipe. Got it from the net somewhere and it was meant for pork chops. I tried it on wings and that's our go-to now. Kinda burnt out on hot wings....

Wow! Great job!!!! You sure know how to use the Weber kettle and make some great bbq!!!
T

yankee2bbq said:
Wow! Great job!!!! You sure know how to use the Weber kettle and make some great bbq!!!
Click to expand...

Thank you!
Dad gave it to me for my birthday in '96 and we've gotten to know each other ;-)