My first attempt at jerky

Was surprised with my smoker averaging 180, it didn't want to seem to reach an internal temp of 165? I have a MES 40 in with 1 probe and added two more, one above the bottom shelf left side and one on top left side. The bottom did run a bit hotter where the top one and the original were pretty close most of the time.

With the temp difference, I decided to rotate trays every 1/2 hour, right before I rotated each time I took a handheld probe and checked a piece for I.T. With the temp averaging 180 or so, at 3 different times at half hour intervals I could not get a I,T. of 165.

So not knowing exactly what to do and wanting to reach an I.T. of 160-165, while it's still wet, I actually threaded a probe in the jerky on the top and bottom shelf. And kept bumping up the temp, where I had to go to around 210 for 10 mins or so, to get 163. Then I quickly opened door and dropped temp to finish smoking around 140-150.

My total smoke times was about 5hrs, but actually only added wood for smoke during 1 1/2 hours of cooking, where the smoke taste came out well, as I didn't want it to strong.

This was ground venison with cure, as I have a lot of venison, and figured I'd practice on ground, then use the good muscle cuts as I get better, as I don't care for the ground as much as regular cut jerky. Here's a pic, hopefully cooked enough, as I did bend it where it would crack pretty good at a 90, so stopped there, as I didn't want it brittle. Does have a pinkish inside color, but guessing that's from cure?

I like whole muscle jerky better myself too, but it's tough to measure internal temps on thin foods. I generally sample when I'm getting close with the whole muscle jerky. Thermoworks make a very fast and small diameter probe for their Mini TC thermometer. I can measure the temp of a shrimp when making scampi, or come in from the side of a burger. 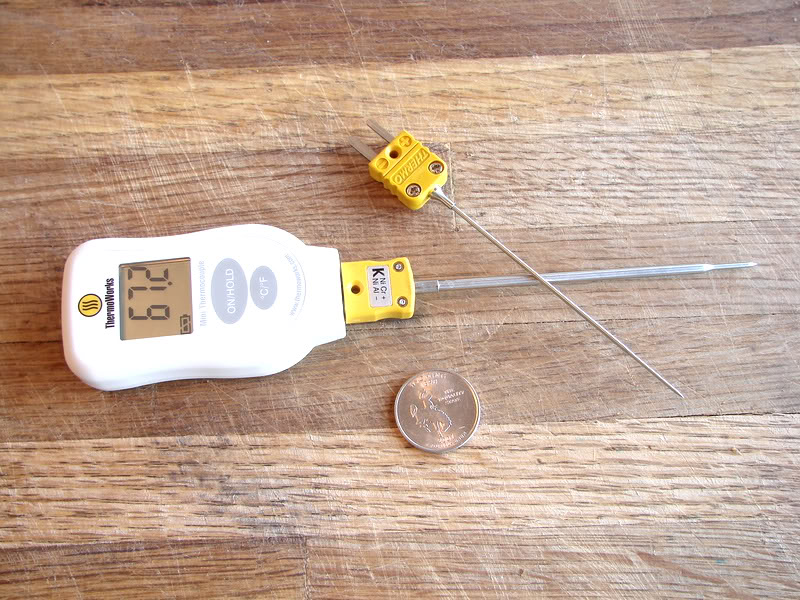 Opinions? Did I go about it the right way to reach an I.T. of 160? and how long should this 160 be maintained I questioned also?

Really hated bumping the temp up to 210 to reach this I.T., but as I stated with two probes directly in the jerky, they were only averaging 150 after a hour and at half with the smoker set around 180 or so.

And I know the probes were working as all three were reading higher before sticking the two in the jerky. Where the one just in the smoker read higher, as the other two in the jerky dropped way down as compared to that probe.

I've tried to read an IT on my jerky as well but it's never what I expected. I just use the Tender Quick in my marinade and I run my cooker @ 180 for the first couple of hours then drop it back to 150 to finish it off. I also keep the jerky in the refrigerator after it's cooled back down. I'm not sure what's up with the IT readings on Jerky but I have the same issue you're describing.
You must log in or register to reply here.
Share:
Reddit Pinterest Tumblr WhatsApp Email Link