I have a really hard time trying to do anything fancy with a brisket. The meat is just so darn good with minimal intervention. Here's my basic brisket method:

This time I started with a 15lbs certified angus beef brisket. Usually I shoot for smaller briskets because all I have right now is a MES 30. So until I can get someone on here to give me their Lang for $free.99 I just make the best of my small surface area.

I don't trim much. Just the hard fat on the underside, and a bit of the fat on the top if it is way too thick (top right corner of picture). 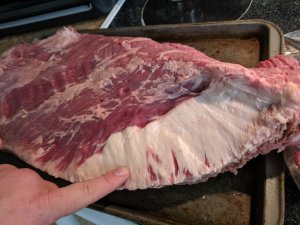 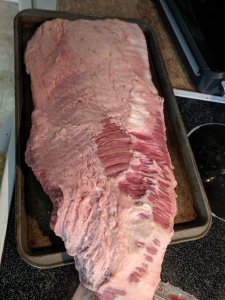 Now it's time for the SPOG (salt, pepper, onion, garlic) treatment. Some guys pre-mix the seasonings beforehand and I do when using it on other cuts of meat, but with brisket I do each spice individually. My main purpose in this is to control the saltiness. Ever since I spent 10 weeks in the bush of Zambia (back in '07) where we didn't have the luxury of added salt, I just don't have much liking for overly salted foods.

This what it looks like when I'm done salting. 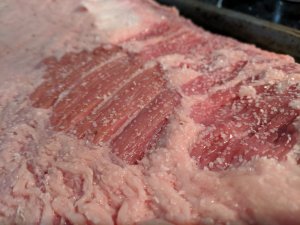 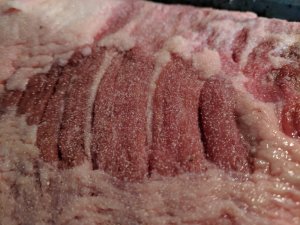 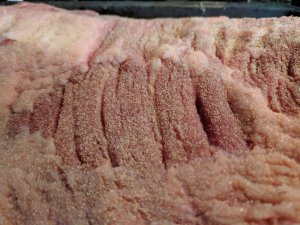 I'm a proud Texan. Bring on the course black pepper. 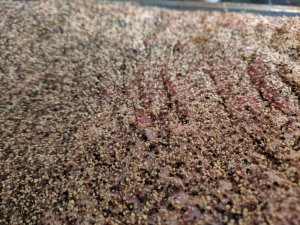 Then into the fridge for a short sauna treatment. I only left this one in there for a few hours tops (had some beef back ribs on the smoker). 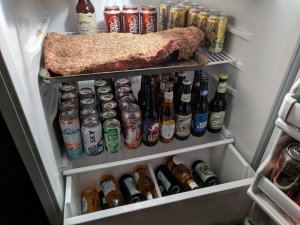 Because this brisket was bigger than my MES could swallow, I used the beer can trick. Just stick a beer can under the middle of the brisket to lift it up. It worked pretty good. 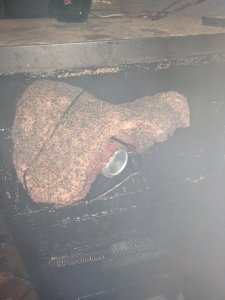 After a couple of tubes worth of smoke at 235°, the brisket was at 167° IT so I pulled it to wrap in butcher paper. What I'm looking for here is good bark formation. If I'm not satisfied with the bark, then it goes back in without a wrap. 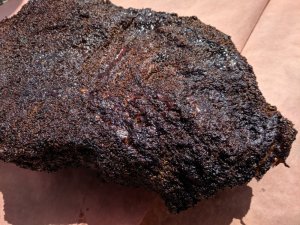 It shrank enough that the can was no longer needed. 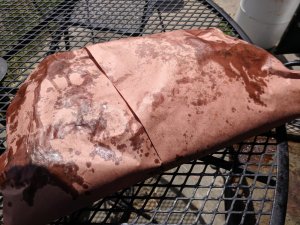 At 206° IT the brisket was probe tender with a bamboo skewer. This where I normally stick it in a cooler and let it rest. But this time I took the wisdom of

Bearcarver who says meat isn't very smart and just left it in the MES after dropping the smoker temp to 145°.

A little over an hour later, we feasted. 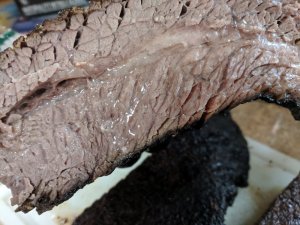 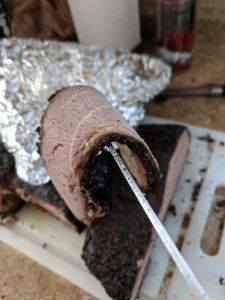 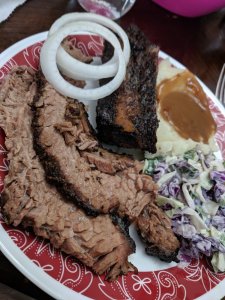 Y'all gotta try this jalapeno coleslaw recipe! We leave out the sugar when we make it. 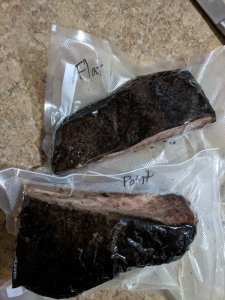 The rest of the point got sliced up and put on rolls with horse radish mayo for fishing snacks the following day. 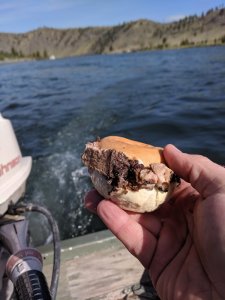 Very nice. Got one rolling right now myself. may you and yours find peace and happiness.
Last edited: May 27, 2019

That Looks Great, PM !!
I love the Beer Can Trick!! I never even thunked about that one!!
In that Pic of the "Juices in Action", it doesn't look "Too Rare", but it looks as though the Heart is Still Beating!!!
Nice Job, and Great Thread!!
Like.

Nice looking brisket man! And selection of brewskies. Like the beer can trick too never thought of that.

Saw an article by Steve Raichlen where you slice up a cold point into thick slices and grill it like a steak. I think I'm going to try that with my leftover point.
Last edited: May 29, 2019
You must log in or register to reply here.
Share:
Reddit Pinterest Tumblr WhatsApp Email Link