I'm not a vegan, but I had the opportunity to try some pulled jackfruit at Blue Pit Bbq outside of Baltimore and I could not get it off my mind since! There are a million recipes for turning this fruit into tacos and barbeque, but I couldn't find anyone who had smoked it! So armed with very little knowledge and a vegan friend coming for dinner in a few weeks I decided to test out some jackfruit barbeque!

I found my jackfruit in brine at Trader Joe's. I rinsed off the wedges, sliced them nice and small and rubbed them with my favorite spice rub. (SPOG, Paprika, cayenne ,cumin and chili powder) I didn't add any sugar because, well it's a fruit! 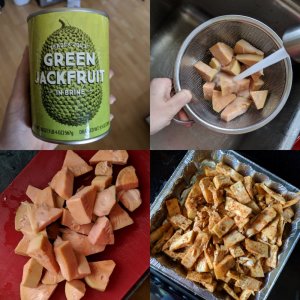 I didn't remove the cores because they already seemed tender and it was not necessary at all, they cooked up just fine! There were no seeds in my cans, but I probably wouldn't have removed them either! I used Applewood for smoking and had them in my Masterbuilt around 250° for an hour. Then I removed it from the smoker and used a potato masher to shred it up a bit more. I also wanted a little more color so I broiled it for a few minutes as well. 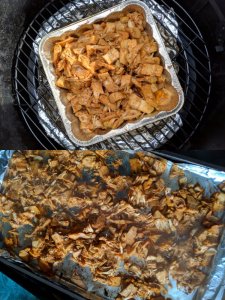 Guys this was delicious. I served it on toasted buns with some BBQ sauce, it was sweet and spicy with almost the texture of a soft juicy pork butt. 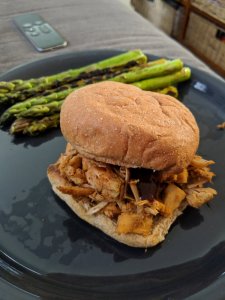 There's plenty of leftovers, and since I didn't sauce during cooking I could see it being great in tacos or on a salad or even just on its own with some fresh coleslaw! I was a little heavy handed with the cayenne so I'd maybe dial it back a bit, but that's really the only change I'd make!
So while I'm not going to give up meat, it's nice to have options for everyone coming off my smoker! And it was fun trying something new!
Cheers!
-L

I have to admit it looks pretty good. It didn't take you much time to do it either. If I can find jack fruit in Green Bay I may give it a try just for something different. Thank for sharing

I saw this done on one of the cookin shows . I think it was triple D . Nice job , and points for trying it now , instead of the day your friend visits . Now you know it's gonna be good !
You must log in or register to reply here.
Share:
Reddit Pinterest Tumblr WhatsApp Email Link