Why is my chicken covered in soot?

I got a OC Pecos offset smoker about 2 months ago, watched a lot of you tube before I got started and used it about 8-10 times so far with all kinds of meat.

I think I've got a real good feel for it, I've been using maple I got from Academy, I chop it down to wrist size sticks. I leave the fire box door door open for good air flow, control the temp with the smoke stack damper (usually about 50%). I let the wood start to burn after I put it on before I close the fire box so I don't get any white smoke in the cooking chamber...I always have blue to clear smoke coming out the stack. The OC Pecos is very responsive to adjustments and I can control the temperature quite well.

So my last cook was two whole chickens, I dried the skin well, sprayed with canola oil and put on salt and pepper. I used no water bath this time because I read somewhere that will prevent the skin from crisping, and I ran it at around 325F for 2 hours, rotating the chickens once.

The meat turned out perfect but the skin was like thin tough leather. Now we really don't eat the skin so it does not matter that much, but the reason for my questions is this, the skin was very sooty. If you touched the skin you would get black soot on your hands, worse than I've seen in any other of my cooks...

I would expect this if I were not careful about the quality of smoke, but I thought I did it perfectly...

Is this normal for an offset smoker?
Is it the maple? Should I try a different wood?
Is there any way to prevent this, or does it even matter?

was it windy the day you smoked these, just asking because you said you leave your fire box door open, if it was windy maybe it stirring up the ashes. also i'm no pro but I don't know if I would put oil on the skin before you start the cook, you want the skin as dry as possible.

The only thing that stuck out to me was oiling the skin. I have found that sometimes too much oil can make surfaces get sooty. Also, do you just use wood? Maybe try running your fire box with charcoal and use wood only for flavor? My $0.02...

I am no expert on stick burners either but maybe controlling the temp with the other dampers and leave the stack damper wide open would yield better results. Seems like maybe too much smoke was getting caught in the cooking chamber. Could be very wrong just my 2 cents

Bad smoke! Open the exhaust damper fully and throttle with the door and fire management. Add splits to keep your fire the right size. Offsets work best with no restriction on exhaust

If you are fairly new to offsets, I highly recommend you read Aaron Franklin's book. He discusses this topic at length and its a fun read.

I agree with Alphonse, open your stack all the way and regulate temps with side dampers.
Teddy

If you specifically want crisp skin, you need to grill the birds. You are at the extremely low end of grilling temps at 325. To crisp skin it needs to be 325+. I always hear about crisp skin, like Grandma's turkey, Grandma didn't smoke her's. Grandma used the oven.

IMHO Smoking is done with a temperature between 1 degree to about 275 degrees and more generally 220 to 250. At 325 degrees you're on the edge of smoking and on the edge of grilling, more in the BBQ area. You are walking the white line in the middle of the road.

I have never ever had a piece of crisp skin from a smoked bird ever, and I've been doing this a day or two. I know of people who crisp the skin after smoking but crisp skin is not indicative of a smoked bird. A grilled bird, but not a smoked bird.

Sounds like you understand your smoker pretty well and have a good handle on what you are doing and like your end result. If you want crispy skin, grill, I grill chickens alot Not for the crispy skin but it damn sure looks pretty doesn't it. If you want a smokey taste on grill chicken I use an aux snoke generator of some type while grilling or generally I throw some pecan shells into the fire's edge.

But its grilled chicken and not smoked, its all semantics. 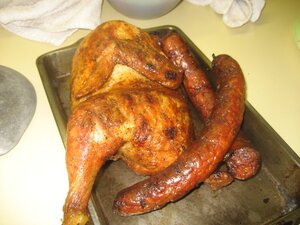 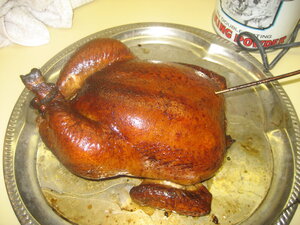 Both work, they sell good but there is most definitely a difference in skins and I tend to get juicier birds smoking but then again I don't brine birds I grill.

Pretty sure you know what you're doing, You just need to decide what you want.

Just my humble opinion. Sorta makes sense though doesn't it?

No help but seems you are getting some good pointers. I never had a off set.

pit of despair , leave your stack wide open and regulate heat with the dampers on the side and a open door. Reading Franklin's book is great advise also. RAY

I use charcoal to start but 100% wood after that.

So what I'm hearing is open the stack, regulate heat with damper/fire size...

I put the oil on the skin following a video I found...yeah, I think that was a bad idea and why I had not had this problem before.

I tried to regulate heat with the damper before, but the temp ran up on me and closing it down enough to get it where I wanted caused smolder and white smoke...so I guess I need to reduce the size of my fire, a bit tricky cause you need a good bed of coals...I may get a fire basket to contain the coals and concentrate the heat... Maybe turning plates to spread out and absorb some of the heat?

Agree with you. I tried oil once and never again. Dry skin is what you need.

I'll echo some of what has been said the stack should be pretty much all the way open and the fire controlled with the fire box dampers as you said smaller fires more than likely and maybe smaller wood splits as well.
With that said I think SmokerJim hit it with his post if you had the firebox door partially open you probably got some wind in there blowing the ash into the smoke chamber and because the skin had oil on it it all stuck while during other smokes either the wind didn't hit it right to blow the ashes into the chamber or because what you were smoking wasn't oiled it didn't stick
J

You're going to get conflicting advice, but I think it's from grease burning up in your smoker. How clean is it? Smoking grease, especially when you run hot for chicken is my bet. Especially if you didn't use a water pan to catch drippings.

As far as the skin goes, if you want crispy it needs to be as dry as possible. Brine the bird however you prefer, pat it fully dry with paper towels and then let it sit uncovered in your fridge for a day.

kpg said:
Wow, thanks! I use charcoal to start but 100% wood after that. So what I'm hearing is open the stack, regulate heat with damper/fire size...
I put the oil on the skin following a video I found...yeah, I think that was a bad idea and why I had not had this problem before. I tried to regulate heat with the damper before, but the temp ran up on me and closing it down enough to get it where I wanted caused smolder and white smoke...so I guess I need to reduce the size of my fire, a bit tricky cause you need a good bed of coals...I may get a fire basket to contain the coals and concentrate the heat... Maybe turning plates to spread out and absorb some of the heat?
Click to expand...

The best way to control heat on a offset is with the firebox door, period, Once you've got a decent bed of coals you pretty much want a constant small fire going, be able to see a little flame in that box. The doors wide open when you put on a fresh split and let it catch, then you make the adjustment by how far you leave the firebox door open, and how big the fire is. The door might be open six inches, or maybe one or two inches, or just a tiny crack. Once I set the side vents on my SQ36, usually about a third to a quarter open, I don't have to touch them again most of the time. If you put on a big split and the heat starts climbing with the firebox door wide open, don't panic and start fooling with the vents and stack, open the cook chamber door and let out some heat. My last two cooks I used no charcoal at all, stacked some splits in the firebox like a log cabin and fired up the weed torch, in a hour I had a beautiful bed of coals. It'll take a little time and a few cooks, then you'll get to know your smoker and become the master of it. RAY

I think it would make your life a lot easier. Many folks with offsets are using a basket now. Helps keep eve a small fire in the state to make good smoke.

I don't have a stick burner, but I do spray oil on the skin. Basically you're putting fat on fat when you do so, and it is is only there as a sticking element for the rub. It sizzles as the fat and collagen in the skin render away.

Whether using my WSM or my Kettle, I do run poultry at 325F+ (let's call it smoke grilling) and get crisp skin. Tough skin is basically skin jerky, which was over cooked. Now, what I can't figure is perfect meat and overcooked skin. That has me confounded.

kpg , another thought in addition to running your pit with the exhaust open, etc. , be sure your wood isn't green. The packaged wood may not be seasoned as well as you think. Here's an interesting analysis by the Univ. of TN on wood bought at the store.

Trying some new fire management techniques today on some 3-2-1 ribs.

About 3 hours in going well, did notice it takes about an hour and a half to get the coals where they need to be for perfect smoke before even putting the meat on. I'll add some picks later. 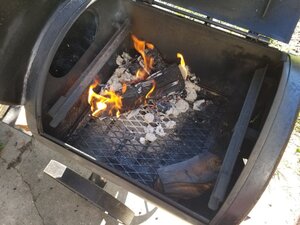 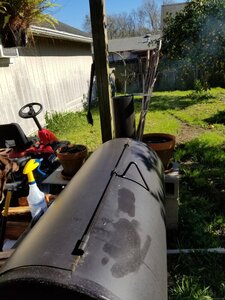 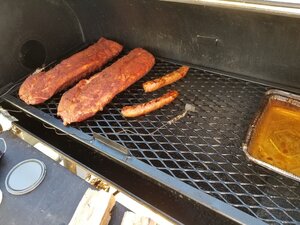 You're on the right track, but rather than control the temp via the firebox door/air intake, control temp with the size of your fire. Run the intake and exhaust wide open to get a clean burn.

Had me going there, with the "Sooty Chicken":
Reminded me of the Old Days, when cruelty wasn't focused on too much.
They used to tie birds, like Chickens to a rope & lower it down the chimney.
The bird would flap it's wings, cleaning the chimney. Yup--That is a bit cruel, huh.