Had a few big deadlines at work this week that we knocked out so I told my sous chef we'd make a quick camp adventure. We only had enough time for a one night trip. Not enough time to canoe camp. Not enough time for the wall tent. So let's go with the hammocks! Ideal since the Perseid meteor showers are in full view right now. Man did I see a ton last night!

We decided to go dirt camp. No real plans on where to go. Just jump in the rig and go drive dirt roads and see where we end up. We totaled 160 miles of dirt and would have had more but we had a bit of a snafu this morning.

It's still possible for me to drive dirt from where we live be all the way to the Oregon border to the south.
We passed one rig during our travels, with the exception of a few parking areas where there were cars parked.

Here's some photos of our journey.

We tried to go to a fire watch tower on East Butte, but the road was closed so we drove around the butte and saw this gnarly ponderosa pine.

Along the way we found this cave, South ice cave. It should be renamed beehive cave. We couldn't go in as we were swarmed by bees at the two entrances.

Old telephone pole at the entrance to a place called Cabin lake. There is no cabin and there is no lake. Just this water tower.

We continued south to Fort Rock. Which I didn't get very good photos of. I would suggest googling Fort Rock. It is a rich history.

The sous chef loves cemetery walking so we took a walk through the Fort Rock Cemetery.

I guess plow discs can be used for things besides discadas!

At Fort Rock. It's too hard to take a photo of the whole thing with a phone.

Since we were down in the area I new there was another fire tower we could visit and also no the way we'd hit a few other places. So we turned East.

First we stopped in Christmas Valley for a quick snack and soda stop. Then it was one to Crack in the Ground. Yep it's an actual place, and it's a crack down n the ground.

Did I mention the temp, 90-100 degrees. Which makes Crack in the Ground an ideal place to be. It stays a pretty constant 40-50 degrees in the deeper parts year round.

In order to get there you take Crack in the ground road, which is dirt.

There are several cracks that run North-South. One parallels the northern crack. I can't remember the total distance but it's at least a mile. It's fairly easy walking but does require some rock scrambling

Saw lots of these buddies. 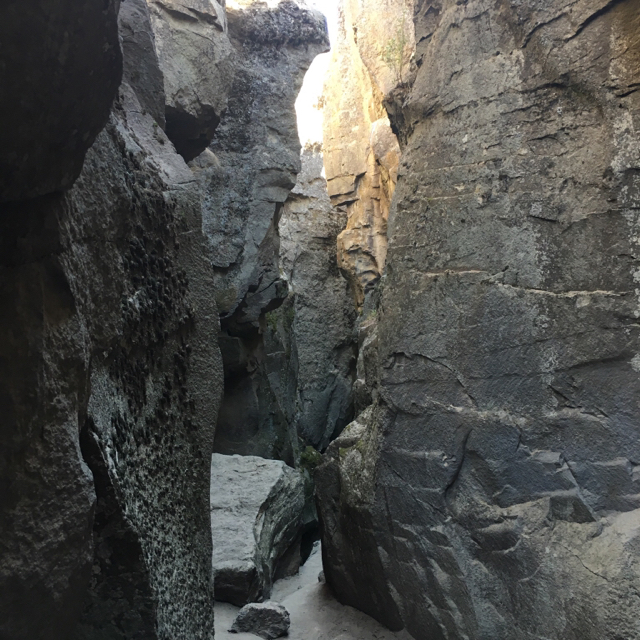 We didn't do the full Crack this trip. We had other places we needed to get to so we took off for the next stop.

I promised the Sous Chef we'd visit a fire tower. Just north of Crack in the ground is Green Mountain. Just happens to be a fire tower there and a primitive campground.

I was a bit confused when we got there. The road used to right to the tower. The tower was 2 stories tall and not made of CMU! Well it seems there was some surplus founds alloyed to FS for tower replacement. We'll this one was replaced with this monster and a house below for the watch. Still open to the public which was cool. That's if you can make walk, 80 steps to the top. So we did. We spent a good hour there. It's been a slow fire year and the ranger was looking to talk. His last visitor in the log book was in July!

Sous chef looked for stray BBQ but there were none to be found!

After an hour of visiting it was back to the west to make camp. We found a cool spot with good hammock trees, right on the edge of a massive clearing to the East. Perfect Meteor shower viewing.

And then it got dark! We watched the meteors fly through the sky for quite sometime. The bats were out eating bugs and occasionally checking us out.

Around 4am I awoke to a band of coyotes tipping it up a ridge away, so I decided to do a quick scan of camp to make sure we didn't leave anything out. While making the rounds I noticed the rear drivers side tire was flat! Well crap. Have no clue what happened it was fine when we went to bed.

When the sun came up I got the spare off the back, changed the tire and guess what, spare was a bit low. As in 10-15 pounds of pressure. Stupid! I always check that stuff before info this and didn't. So I knew we were about 10 miles from pavement and 30 miles from a town with Air... I also knew there'd be no traffic. So we limped on the low air spare back to town. Filled up with air, then hit a local cafe to fill up on breakfast before heading 45 miles down the crowded asphalt highway.

Always is! Love getting out and playing in the dirt!

Thanks Al it was!

Hey DS, great trip looks like a lot of fun was had.

Dirt roads are some of the best fun there is.

Wish we had more here, but we must pave everything.

Great pictures, nuts to the flat tire, it's all part of a good story

that the sous chef and you will always remember.

Gearjammer said:
Hey DS, great trip looks like a lot of fun was had.
Dirt roads are some of the best fun there is.
Wish we had more here, but we must pave everything.
Great pictures, nuts to the flat tire, it's all part of a good story
that the sous chef and you will always remember.

Thanks Ed, it was fun and we did do some great things. We are fortunate to live in a state that still has all these dirt roads.

Case That some really Beautiful Country you have around you.

tropics said:
Case That some really Beautiful Country you have around you.
Richie
Click to expand...

Sure is Richie, Oregon's pretty amazing. We haven't even touched the tip of it. I could spend three months back roading and still not get to all of it!

Beautiful country and some great pics. Really enjoyed them.

We've got some really good dirt roads around here, but we can't match the scenery. Lots of beautiful green forest here but nothing like Oregon has.

Beautiful country and some great pics. Really enjoyed them.

We've got some really good dirt roads around here, but we can't match the scenery. Lots of beautiful green forest here but nothing like Oregon has.

Thanks Gary! It's a great place to live. Our town isn't like it used to be so we'll be here a few more years then it's off to somewhere slower! May still be in Oregon just won't be in Bend.

You guys had what looks to be a fantastic time. As for the flat tire and the beehive cave: these incidents are what is known as "having adventures!"

Thanks it was a great time!

RogerWilco said:
You guys had what looks to be a fantastic time. As for the flat tire and the beehive cave: these incidents are what is known as "having adventures!"
Click to expand...

That's exactly how I explained it to the sous chef! When we head out on these trips we have no plans and adjust accordingly!

What's up with the roll up door half way up the side of the fire tower?

What's up with the roll up door half way up the side of the fire tower?
Click to expand...

Good question! They are over windows. Which they keep covered unless they need light to work in the shaft (best way to describe it). Construction is very much like a light house. At the bottom level there is a room that houses battery banks, etc, totally solar powered but in an emergency there is a generator. Up
Top at the watch there is a massive bulkhead door in the floor that can be shut and locked. I asked if all this was for fire protection. Which I knew it wasn't.