You are using an out of date browser. It may not display this or other websites correctly.
You should upgrade or use an alternative browser.
SUPPORT THE FORUM-- Go Ad-FREE!
Forum Wiki
B

Began this past Sunday with happiness and anticipation for an easy day with little going on. Day turned out fine, but it was not without some complications to keep life interesting. Started the brisket the day before with some Jeff's TX Rub. We get half a beef a year, so I needed to make room for new beef. I think the brisket was around 11 lbs and did not have to trim much. So at 7:00 am with barely any day light this went on the GMG with a goal temp of 275. I do not trust the factory temp so I had my ink bird also checking grate temp. Things started going south about an hour in. I went ahead and plugged in another probe into the ink bird and added my Temp Spike for it's 2nd run. Within a short time my older ink bird probe was registering close to 205. I knew by time, and looking at the meat it was still raw. So took that probe out and tried another...same thing. So at this point Temp Spike is good, 2 older probes are not working. Had a new, never used left in the box. Didn't think I'd ever need to use a 4 probe gauge but glad I bought it. So new probe is looking accurate, time to relax a bit.

I guess not. There was no fire, brisket still fine and smoker is rolling along at 275. Removed the Temp Spike and kept on. Around 11:30, ink bird at 200+ so I probe around and brisket feels pretty good. I was very surprised that I was done cooking at 4.5 hours. Okay, lets go with Plan B into the oven after another temp check with handheld 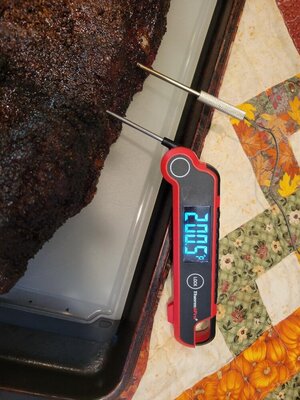 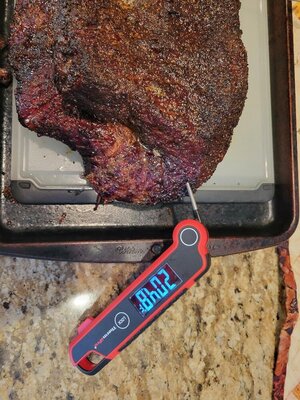 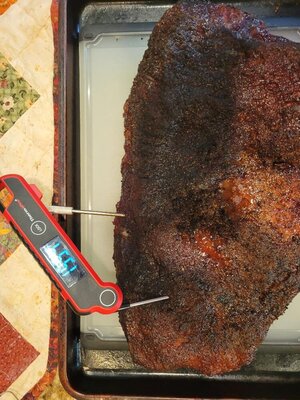 So the lowest my oven will goes is 175. I let the brisket cool to around 155 and covered with foil into the oven. Added a thermopro probe from my TP-20 along with ink bird to confirm oven temps. I guess for the next several hrs I will be turning the oven off and on to keep brisket above 140. Time to check existing Rubbermaid therm. Hmm..does not feel like 300 degrees in my hand. Guess it goes in the trash. 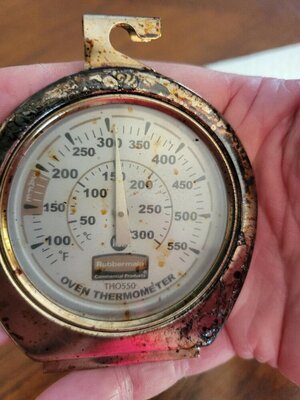 So I managed to babysit the oven most of the afternoon until dinner time. Brisket was pretty good. I have made several, and have not had a terrible or wonderful one yet. Glad I survived and still have a few working therms left. I will be doing a boil test on the 2 probes and Temp Spike soon.
. 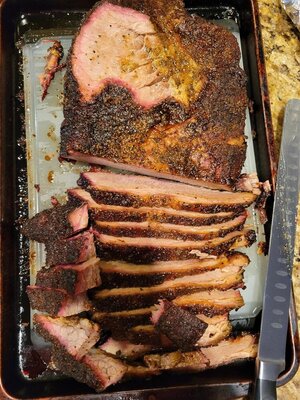 wow, way to work through all the problems!

Sounds like a roller coaster brisket cook but glad to hear it turned out okay in the end.

If ever in doubt about your thermometer probes, stick a clean probe in some peanut butter for reference and when the probe going into the brisket feels like that, it's done.
Reactions: TNJAKE

Just did my first brisket 9.5 hours on my kettle at approx 250 degrees for the most of the cook. Surprised me at how fast it was finished. Yours looks great.
Welcome to the forums.Jim

Agree with Jeff, you probe for doneness in the flat. Never go by temp for determining when a brisket is done.
Reactions: SecondHandSmoker

I had a similar problem a few weeks ago.

My thought was to put it in the oven set to 205˚ for a few hours to let the fat render down. Didn't want to risk overcooking it.

My question is...could I have put it in a 205˚ oven? Or would the meat keep cooking to a higher temperature are dry out?

How were you obtaining the smoker's internal temp, built in thermometer? Sure sounds like it was running a lot hotter at the grate level to get the middle of the flat to 205º in 5 hours. For reference, I smoke at 275º (verified via a calibrated grate thermometer) and it takes a lot longer than 5 hours to reach the 200º level with a similar sized brisket.

After this smoke, I verified the accuracy by putting the probes in boiling water. Both probes checked out OK.

So, one of the Inkbird probes was a grate probe, correct?

Yes...one on the grate, one in the flat.

Hmm... got me stumped then. Collagen continues to breakdown into gelatin in the temp range of 160-180º. Since the brisket got to 205º rapidly I'm going to guess a fair portion of it never broke down. So to get the rest of it transformed you might consider pulling it, let the IT drop to 170º then double wrap tightly in foil (to help seal in whatever moisture there was) and place in the oven at 175-185º for a couple of hours or even longer. At that point I would start probing the flat for tenderness. Having never been in this situation I'm a bit uncertain as to whether you would need to raise the IT back up or not. Hopefully someone will chime in on that.

I checked out a post called "Brisket failures". There were a couple YouTube videos about putting the smoked brisket (to about 175º) in the oven at 150˚ for 10 hours or so. They claimed you "always get a perfect brisket this way.

I think I may try that next time.

windlaker said:
I checked out a post called "Brisket failures". There were a couple YouTube videos about putting the smoked brisket (to about 175º) in the oven at 150˚ for 10 hours or so. They claimed you "always get a perfect brisket this way.

I think I may try that next time.
Click to expand...

Most ovens won’t go below 170, and many have a time out setting so they may not go for 10 hours without shutting off.
Al

And I know our will shut off as well.

Got more stuff to figure out.
You must log in or register to reply here.

My second brisket ever, trying Smokin'Al's method for this flat

Beef Friday at 10:59 AM
civilsmoker