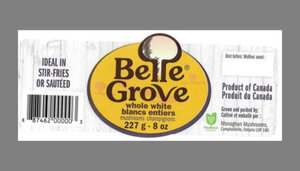 A recall notice for whole white mushrooms that warns of botulism concerns does not include any details about how or when the problem involving the Belle Grove brand product was discovered.
Monaghan Mushrooms Ltd. reports distributing the implicated mushrooms at the consumer level in the Canadian province of Ontario. The recall notice does not describe what kind of containers the mushrooms were sold in, but it does include the label photograph shown above.
The mushrooms have an expiration date of Jan. 15 and a UPC number of 8 87462 00000 3, according to the recall notice posted by the Canadian Food Inspection Agency.
“This recall was triggered by the company. The Canadian Food Inspection Agency (CFIA) is conducting a food safety investigation, which may lead to the recall of other products,” according to the notice.
As of the posting of the recall notice, no confirmed illnesses had been reported.
About botulism
While a variety of illnesses can result from eating under-processed food, one of the most dangerous is botulism poisoning. Untreated, botulism can paralyze the muscles needed for breathing, resulting in sudden death.
Anyone who has eaten any of the recalled mushrooms and developed signs of botulism poisoning should immediately seek medical attention, according to the U.S. Centers for Disease Control and Prevention (CDC).
“In foodborne botulism, symptoms generally begin 18 to 36 hours after eating contaminated food. However, symptoms can begin as soon as 6 hours after or up to 10 days later,” according to the CDC website.
The symptoms of botulism may include some of all of the following: double vision, blurred vision, drooping eyelids, slurred speech, difficulty swallowing, difficulty breathing, a thick-feeling tongue, dry mouth, and muscle weakness. People with botulism poisoning may not show all of these symptoms at once.
These symptoms result from muscle paralysis caused by the toxin. If untreated, the disease may progress, and symptoms may worsen to cause paralysis of specific muscles, including those used in breathing and those in the arms, legs, and the body from the neck to the pelvis area.
(To sign up for a free subscription to Food Safety News, click here.)
You must log in or register to reply here.
Share:
Reddit Pinterest Tumblr WhatsApp Email Link