We had our Labor Day party yesterday, as I (and my friends) are at the age that we usually like to take a day to recover, and not go straight to work with a hangover. It was supposed to rain, but we had a nice 75° day.
This choice rib roast was on a good sale a while back, so I took it out of the freezer about 5 days ago, and invited some friends and family over. Biggest piece of meat by far that I've ever tried to make whole. I never even tried to count the ribs, so I couldn't tell you how many there were. It actually overhung my 1/2 sheet pan. Cut some slits and inserted a dozen or so garlic cloves to get more flavor down inside. Something I learned from the BBQ Pit Boys. Brushed with some A-1 sauce and rubbed with Montreal Steak Seasoning the night before. It's as good or better on rib roasts than most beef rubs I've come up with. We just had a new deck built that has an aqua-blue, fiberglass covering for my smokers. It's great, but it makes all the pics I take out there come out with a very unattractive blueish tint. See? Anyway, this was also the first time I tried out my new Solis Smart Food thermometer. Up to six probes that bluetooth to my phone. Have to say it worked pretty slick. I was able to monitor both ends and the middle, plus the grill temp. It will even show you a graph. Only down side was that at the end of the smoke, the plastic probe holders came out all the same color. I'll have to see what they look like after I've cleaned them. I used GMG Premium Texas-Blend pellets. Really good on beef. Sometimes you want the flavor of the beef to shine, and not for the smoke to be too overwhelming. This grill is great for that.
Since it was getting done early (took about 4-5 hours at 220°), I took it off the grill when each end was close to 130°, and the middle was about 120°. I placed some foil on it, and set it in the oven on WARM for an hour or two. That allowed the middle part to catch up to med-rare 130°, while each end was just a little higher. Got a lot of rave reviews. We paired this with some fresh local corn, homemade Italian garlic/rosemary bread, and sliced, red & orange heirloom tomatoes. Not to mention, a LOT of wine. Even with 11 people, we still had a lot of leftovers.
My buddy brought over an ice cream pie that featured a gingersnap crust, layered mango and coconut ice cream, and berries on top. Fabulous!

Dang that looks good. I have a 4# in the freezer from last Thanksgiving sales. Sounds like it may be time to thaw that sucker after seeing yours.

We need a drooling emoji.
That is amazing. Great job!

that is awesome! i Love PR! that one was done very fine!

A masterpiece sir! Gotta love technology that helps make a great cooking experience. Glad the folks were happy....How could you NOT be!.
Don

A superb feast. I might have to try the Montreal rub.

Damn man that looks so good I just ate lunch and am hungry again now!

I do not like GMG one bit, but that looks great!

Beautiful.
That should've detoxed the poison. 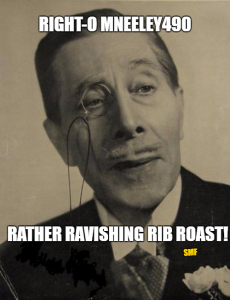 Nice cook and looks to be a quality cut of rib roast. Haven't seen you at my joint lately. Now I know why!

ynot2k said:
Nice cook and looks to be a quality cut of rib roast. Haven't seen you at my joint lately. Now I know why!
Click to expand...

Hi, Jeff! I was up about a month ago, didn't see you in there at the time. You may have been in the back with the smoker. I promise I'll be back up soon!
You must log in or register to reply here.
Share:
Reddit Pinterest Tumblr WhatsApp Email Link