tx smoker posted another one of his creations that really got my attention, and since I really liked his Ranchero sauce I had to give it a try. I made a couple of changes from his procedure. After visiting three Mercados I found everything but Pasilla powder.
I wound up getting dried Pasilla peppers. Chopped them small and "ground" them a bit. I had a taste and was amazed at how sweet they are. 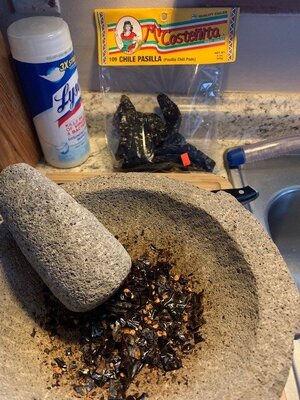 Aside from that, the only change I made to Robert's spice mix was to add a tsp of Cumin.
He used Ribeye but I used Eye of Round that I had rotisseried but let it get a little too done. Diced it up small and simmered it in Beef Broth and the spice mix until the liquid cooked out. It tenderized nicely. 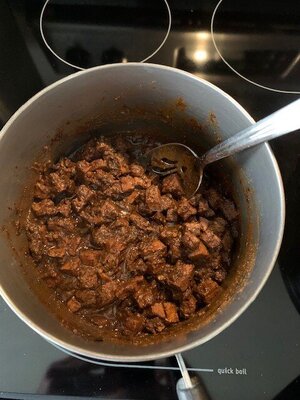 Then I spread the tortillas in the C.I skillet, spread the re-fried beans and started layering, using Quesadilla for the cheese. 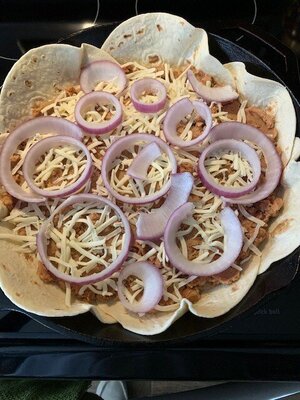 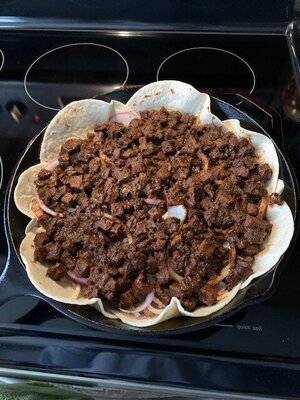 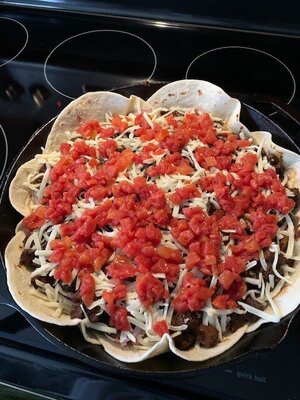 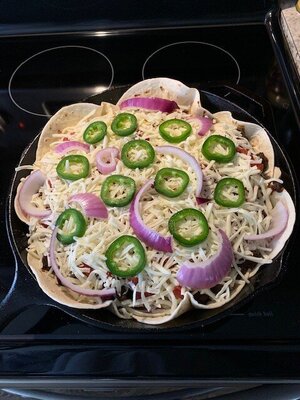 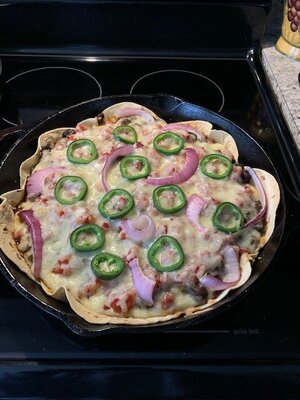 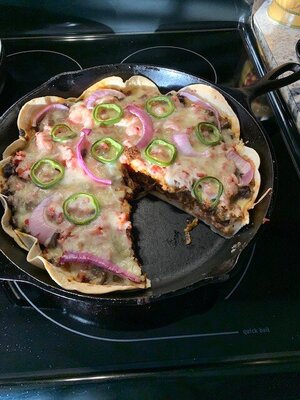 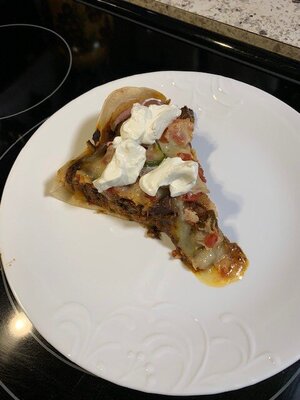 We both loved it and had it two nights in a row. Wish I'd made some Spanish Rice to go with it. Next time, and there will be a next time!
I got a small box of Sazon Goya, but after looking at the ingredients, it seems to be MSG with some Garlic, Salt and Cumin. I have nothing against MSG and use it, but I felt Robert's spice mix didn't really need anything else (except for the Cumin ;-).
Another shout out to

tx smoker for the idea! This is actually more fun than a regular pizza because I don't have to make the dough.
Thanks for looking, and keep trying new things!

Looks so delicious!! Thanks for sharing this!
Reactions: SmokyMose

I could go for a plate of that deep dish

Point for sure
Chris
Reactions: SmokyMose

Looks great, I could also go for a slice or 3 of that .

Excellent Dan! Yeah, Robert is quite the catalyst here with his wild. And delicious creations!
Reactions: SmokyMose

I am way late to the party but that's been somewhat the norm recently.

One of the many things I love about this forum is a person will get an idea, make it, post the results here, and somebody else takes it to a whole 'nother level. That's exactly what happened here. Dan, I am honored that you found my thread inspirational enough to take a shot at it. Not only did you take a shot, you a dead ringer bullseye by taking what I threw together and made something absolutely spectacular. That just looks insanely good. Excellent job sir!!

tx smoker said:
I am way late to the party but that's been somewhat the norm recently.
Click to expand...

No worries, Robert; You're not one of the unemployed leisure set yet ;-)
Although I couldn't find the Pasilla powder, I kind of liked the chopped dried ones.
They simmered into the meat just fine.
Although I didn't use the Sazon Goya in the "pizza", I did a meat loaf yesterday using a couple of packets of it instead of my usual Italian seasoning and it was great!
I get some funny looks but I'm getting good at navigating the Mexican groceries around here. At least most of the checkout people speak English....
Dan

the only thing more amazing than that mex pizza is the fact that you had leftovers. Looks darn good.
Jim
Reactions: SmokyMose
You must log in or register to reply here.

More Cast Iron skillets and a great side from the people here on the forum.

Pulled my Cast Iron out....

First brisket in a long time.