Bearcarver said:
I wouldn't take any law abiding American's weapon away, but I am fully in favor of background checks, and keeping weapons out of the hands of known Looney-Tunes. I also don't see the need for a magazine that holds more than 8 shots, but maybe I'm just a better shot than most.
Click to expand...

Thank You for your service Bear! I am with you on background checks. I passed my last three at The Outpost Armory (home of the Barrett 50 cal), and was glad to do so. My only problem is who gets to decide who is "Looney-Tunes", and also mag capacity. I don't want to live in a world where a "doctor" decides, whether or not, I'm allowed to have a firearm. As far as mag capacity, not everybody is a trained marksman. Better to have too many, than not enough!

as far as mag capacity, as long as you end up with one more bullet then your attacker you'll be all right

AR15
Understanding America’s Rifle
The term “modern sporting rifle” was coined to describe today’s very popular semiautomatic rifle designs, including the AR-15 and its offspring. These rifles are used by hunters, competitors, a lot of Americans seeking home-defense guns and by many others who simply enjoy going to the range.
Though modern sporting rifles are increasingly popular, they are too often misunderstood.
The central reason these firearms are misunderstood is political. Though the semiautomatic design used in today’s pistols, rifles and shotguns was invented in the late-nineteenth century and was popularly sold to consumers in America and Europe in the early twentieth century, the modern sporting rifle has been called a “weapon of war” by those who want to ban them.
Though some modern sporting rifles might cosmetically look like fully automatic rifles the military uses, modern sporting rifles by law have many internal differences.
To dispel the myths about modern sporting rifles so that we can have honest and factual discussions about them here are the facts about these rifles..
Modern Sporting Rifle Facts
Modern sporting rifles are among the most popular firearms being sold today.
The “AR” in “AR-15” rifle stands for ArmaLite rifle, after the company that developed it in the 1950s. “AR” does NOT stand for “assault rifle” or “automatic rifle.”
AR-15-style rifles are NOT “assault weapons” or “assault rifles.” An assault rifle is fully automatic, a machine gun. Automatic firearms have been severely restricted from civilian ownership since 1934.
If someone calls an AR-15-style rifle an “assault weapon,” then they’ve been duped by an agenda. The only real way to define what is an “assault weapon” is politically, as in how any given law chooses to define the term—this is why the states that have banned this category of semiautomatic firearms have done so with very different definitions.
AR-15-style rifles can look like military rifles, such as the M-16, but by law they function like other semiautomatic civilian sporting firearms, as they fire only one round with each pull of the trigger.
Versions of modern sporting rifles are legal to own in most states, provided the purchaser passes the mandatory FBI background check required for all retail firearm purchasers.
Since America’s founding, civilian sporting rifles have evolved along with military firearms. The modern sporting rifle simply follows that pattern.
These rifles’ accuracy, reliability, ruggedness and versatility serve target shooters and hunters well. They are true all-weather firearms.
Modern sporting rifles are chambered in .22 LR, .223 (5.56 x 45mm), 6.8 SPC, .308, .450 Bushmaster and in many other calibers. Upper receivers for pistol calibers such as 9 mm, .40, and .45 are available. There are even .410 shotgun versions.
These rifles are used for many different types of hunting, from varmint to big game. And they’re used for target shooting and in competitions.
AR-15-style rifles are no more powerful than other hunting rifles of the same caliber and in most cases are chambered in calibers less powerful than common big-game hunting cartridges like the .30-06 Springfield and .300 Win. Mag.
The AR-15 platform is modular. Owners like being able to affix different “uppers” (the barrel and chamber) to the “lower” (the grip, stock).
They have been commercially sold to the American public since the 1960s.
They are commonly-owned, with more than 16 million modern sporting rifles owned by civilians by 2018.
And, they are a lot of fun to shoot!

As a responsible hunter myself , .22 long rifle is great for tree rats . .223 is not a hunting caliber . Unless you're hunting men .

DocSteve said:
Curious as to member here on their opinions on gun ownership.
Click to expand...

Here's my opinion , but I don't go to gun forums and ask about smoking meat . 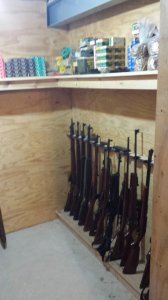 DocSteve said:
To put some perspective. I grew up hunting. Deer, hogs, birds.
Click to expand...

Maybe you need to lay with your dick in the dirt in a foreign country , with one pointed at you .

Ohio is an open-carry state. I would need a permit for concealed-carry, but I could walk around with a pistol on my hip in plain sight. There are exclusion areas like workplaces, stores, etc.

I suppose if I actually did that, though, it would not take long for me to be surrounded by law enforcement.

Few random. I got lucky. I was working in a gun store in North Carolina.
A guy came in and bought a 2k rifle.
While we were putting glass on it, I talked to him.
Asked what he was getting it for. He said to donate it at a Naval Special Warfare ruinion.
I have a little experience in the community so it peaked my interst.
He said last reunion he went to he met Adm. Mcraven and gave him a knife.
At the time McCraven was in charge of JSOC. All special Warfare in the US military.
I mentioned ya, I know him. He would come out and watch us do some jobs.
He laughed and said McC dosent go out w/ people on jobs. I explained people that work for him he does.
That day he bought an $1800 Benellie M4 and gave it to me.
Said here's to the beginning of our friendship. Every few months he would call me up and ask what where the 3 coolest guns I knew about.
He would drive over, pick me up and we would drive the entire East coast and get them.
As a thanks, I got to get one for myself.
Sucks is he made me executor of his estate for his gun collection. At 1st I thought it was a preemptive deal.
Talked to him some more and confronted him about what I had suspicions off.
Got a call. He was pulled over after putting a pistol in his mouth.
Committed to a ward. Also meant he could not own firarms anymore.
I just finished up a bulk sale of Sig Sauer pistols for almost 40k.
I'm making 1k payments to buy a pistol from him. Dave Lauck custom made.
One of our trips he asked me what pistol I would want, money no object. I chose DL. He called me up a couple weeks later and said talk to Dave and have him a 1911 built.
In my opinion, the perfect 1911.

The final build is used on his site as advert.

chopsaw said:
Here's my opinion , but I don't go to gun forums and ask about smoking meat .
View attachment 400407
Click to expand...

chopsaw said:
As a responsible hunter myself , .22 long rifle is great for tree rats . .223 is not a hunting caliber . Unless you're hunting men .
Click to expand...

The .223 is an excellent varmint round. One of the most popular for woodchucks, prairie dogs, fox, coyotes, and other small game. With the right bullet and shot placement it is more than capable of taking whitetail deer.

Didn't want this to turn into a "political debate". Was just curious about people's stance on topic item.

I served to preserve and protect the freedoms and rights of American people to bear arms, speak their mind, and behave respectfully, even in the presence of those with opposing views. I did not serve to be controlled or submit to another's beliefs.
You must log in or register to reply here.
Share:
Reddit Pinterest Tumblr WhatsApp Email Link