I have a product question for you guy's and gal's about Kosmos pork injection.

Let start off by saying that I have to smoke a few pork butts for my Father's 80th birthday party this weekend.
I'm going to smoke the butts Sat. for the Sunday party.

My first question is, have any of you ever used Kosmos pork injection on butts? 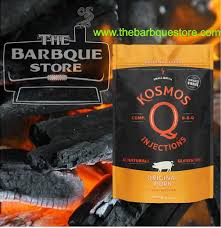 And how many butts do you think I need for 25 Sicilians (big eaters), mainly adults?

I was planing on two, or should I smoke three?

Most of the people will be traveling, so they won't be able to take any leftovers, and I really don't have the freezer space for a bunch of leftovers.

I'm a little worried about trying a new (for me) product on such an important family event, I honestly wouldn't even think about doing so except my Father gave me the stuff as a gift and I know he is going to ask me if I used it or not.

Have never used but could do up 1 butt to try it. I'm sure it won't ruin it. Not sure on the size butts you have but I would do 3 anyhow if not 4. Vac sealed leftovers don't take up much freezer space.
Good luck and Happy Birthday to Dad !

We used Kosmo's Pork in 2019, 3 practice cooks and one competition. I found it a little on the bland side, but the phosphates did hold on to a lot of moisture. I believe the guy cooking pork mixed it with apple juice. He did use a finishing rub and re-introduced de-fatted foil juices back into the meat.

For pork amount.... take the cooked weight of one portion size X number of guests to get the total 'cooked weight'. Double that number for the raw weight. You don't quite loose 50% to trim and shrink, but the extra will be your buffer.

I've never used it , but the big attraction to those is the phosphates in the mix , and the flavor of course , but the phosphates will keep all the goodness inside the meat .
I make my own based on Dave's ham injection .


Edit - I have no idea where I came up with this . I must have completely misread it . Just wanted to clear that up .
I looked at the website . It gave directions for the whole packet . Said up to 7 butts .
That always throws me a curve for smaller batches .


Also take the sodium in the injection into account when you season the surface .
Last edited: Aug 13, 2021

Figuring the butts would be in the nine pound range I'd smoke up three, inject one with the stuff your papa got you , maybe go with a different rub on each butt to shake things up. RAY

Haven't used kosmos pork injection but I do use his beef and poultry injections quite often. It's good stuff so I don't see how you can go wrong with the pork. Like

thirdeye mentioned I'd mix with apple juice instead of water

I've had some of that pork injection in my shopping cart for a while and haven't pulled the trigger yet. And just like

TNJAKE I have had excellent results with the poultry and beef injections! I just debated in my own mind if pulled pork butts really need it? They are already so juicy and since they are pulled, I can add any additional liquid and spice I choose back in or add on the back end. Now, if it were to be left whole and sliced as a pork roast, I can see where the injection would be the way to go!

However, In this case I am with

chopsaw ... Since it was a gift, you have to use it. I don't see any harm or foul that could go wrong either. Go for it Dan!

I have used the Cosmos Beef injection before and loved it----I am sure the pork injection would be equally as good....Like someone else said, try it on one or two buts and compare.

Have not used it but also make my own and a big fan of STPP based injections. Also agree to use apple juice for your base. I found my yield to around 80% when injecting due to the STPP. Zero pan juices only fat in my tray. Heads up the DI&DG in the Kosmos ingredients is basically accent/msg and really adds to the flavor.

zwiller said:
Have not used it but also make my own and a big fan of STPP based injections. Also agree to use apple juice for your base. I found my yield to around 80% when injecting due to the STPP. Zero pan juices only fat in my tray. Heads up the DI&DG in the Kosmos ingredients is basically accent/msg and really adds to the flavor.
Click to expand...

The use of phosphates and MSG can be found in many BBQ products marked "competition". It works and it wins. The first competition cooking class I took, one of the cooks had a 2# container of MSG. I use some Kosmo's injections and Big Poppa injections and Okridge Game Changer, but at home I use a much lower strength mixture. I'm such a big fan of DaveOmak's injectable ham cure I've used the same ratio on porkstrami and pastrami and I'll likely experiment with it in my beef or pork injections.

Thank you all very much, I've decided on making four butts and injecting two of them with the Kosmos diluted in A.J. It calls for 1/3rd cup of the dry injection, I'll use 5 tablespoons diluted in 1 1/2 cup of liquid for 7 lbs of meat. So basically I'll be a smidgen lighter than the called for amount of the dry mix as I'm not a huge fan of phosphates. The other two butts I won't inject at all, and I'll see which ones end up tasting better. Two will be done of the Camp Chef pellet gill and the other two will be done on the trusty old drum smoker.

In the end it will all get cleaned pull'd and combined into one big hotel pan.

I figure this way I can taste test the Kosmos, and that way I'll be able to tell my Pop's hell yeah I used your gift which will make him happy, and I'll be able to see which I like best.

I really appreciate the help and thoughtful responses from you guys, y'all are what keep me coming back to this site day after day.

Thank you all very much.
Dan

Yeah, I'll take some pictures, I've kinda been lagging in that department lately.

Be sure to cook one of each recipe in each cooker to maintain a control.

1MoreFord said:
Be sure to cook one of each recipe in each cooker to maintain a control.
Click to expand...

Great idea, will do, thank you.
Dan

GonnaSmoke said:
I'm in for the results...
Click to expand...

Most likely, I'll cook them up either Friday or Sat. for the Sunday party.

Thanks for watching.
Dan

Curious why you are not into phosphates. Is this first time ever injecting? I like to inject at least the night before and let it do it's magic.

zwiller said:
Curious why you are not into phosphates. Is this first time ever injecting? I like to inject at least the night before and let it do it's magic.
Click to expand...

Because I like eating cold BBQ leftovers, and the phosphates leave the fat globs in the meat.
I plan on injecting 2 of the butts with the Kosmos a night or two before they go in the pit.

Mmmmm. Fat globs. In all seriousness, maybe a collegen glob. I don't think phosphate interacts with fat. Interesting observation though.

The phos, binds the fat, so it doesn't run out of the meat, which is why phos. Injected meat don't reduce as much in size. It's not really globby fat, it's more like a coating of congealed fat that clings to the meat, it's great when it's reheated but not very appetizing when it's cold. When I inject, I normally inject consume', broth or fruit juices. I've tried Butches block Phos. a few times, but really dislike the texture due to the clingy fat that it leaves on the meat and anything that touches it once it cools.

Hopefully others chime in to confirm but don't think phosphate is the doing that and bet another ingredient is at play. Xanthan gum is well known emulsifier and is listed in Kosmos. I have never used anything but my own injections and do not use any emulsifiers and no fat globs.
You must log in or register to reply here.
Share:
Reddit Pinterest Tumblr WhatsApp Email Link