First Brisket was a semi-fail but overall success...

I was planning on feeding 29 people, and didn't want there to be a shortage of beef so I ordered a 19lb brisket from my local butcher. 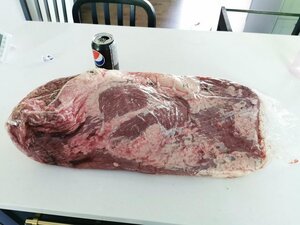 I followed Aaron Franklin's tutorial on Youtube pretty carefully, and tried to mimic everything he did. I had a little bit of trouble with the big Mohawk at the top there, and it was killing me to trim it down to a reasonable height. I ended up trimming a total of 4lbs off the 19lb Brisket, and figured that 15lbs across nearly 30 people had better be enough.

Here's the brisket all trimmed, seasoned with 50/50 salt and pepper. 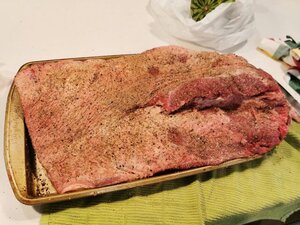 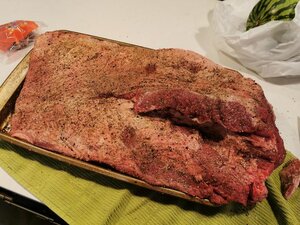 I set my GMG temp to 225, and placed the brisket at 9:15 PM for an overnight cook. I figured an hour per pound cook time would take me to 12:15 the next day or at the very most, an hour and 15 per lb which would mean the brisket could be pulled and still rest in time for supper which was planned for 6pm. The last thing I wanted was for this brisket to be underdone and people rolling in, so I erred on the side of being done too early. 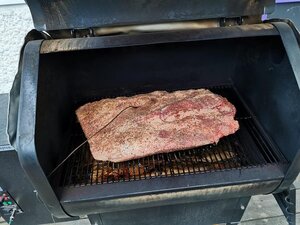 What I DIDN'T expect, however, was that at 8:30 the next morning the brisket temping 203 on the probe-tender point and 195 on the nearly-done flat. In just under 12 hours, my 15lb brisket was very nearly ready to pull.

I searched this forum for "What to do if your brisket is done way too ****ing early" and decided that the best bet for me to enjoy my golf game (because of course I had booked a 9AM tee time) but not dry out my brisket was to wrap it in foil and pop in the oven at 170F (its lowest temp). At about 1:00 I texted my wife to turn off the oven but leave the brisket in it, and when I returned home at around 1:30 I took the brisket out (Temped it at exactly 170 degrees after a 3 hour stay in the oven) and wrapped it with every towel I could find before throwing in a box and transporting over to my parent's place where we were all meeting.

I sliced the entire thing and we served the food buffet-style so as to limit any type of COVID-19 risk. This way I was able to control the portions as I was still slightly worried about having enough meat to go around. 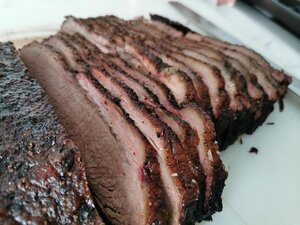 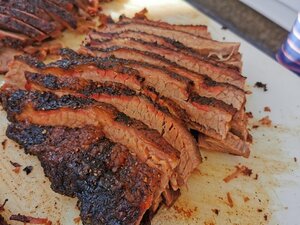 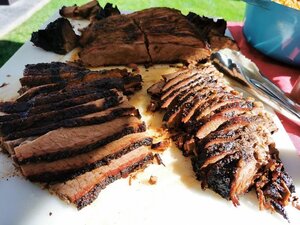 I’m glad it worked out for you. Nice save

Looks GREAT here! If you really dig deep you will find that Franklin rests A LONG time in a warmer much like you did. Many guys (such as myself) intentionally do the smoke just like you and rest. Also, if you continue to dig about the short cook/high temps you will find that many pellet smokers have a hot spot in the center. Some guys make or buy a heavy gauge diffusor plate, some guys use top rack, but there are other hacks.

Looks good. Congrats. I was surprised to find out how inaccurate my smoker was after I put a inkbird probe in the box.
B

Looks good! Nice job on your first brisket. I would definitely get some accurate probes and place in different spots so you know exactly what temp you're at and if you have hotspots

Thanks guys. I've been meaning to temp my grill to get a better idea, but I've not really run into any problems since owning it. I've noticed when doing chicken etc that the right side is typically the hot side so that's what prompted me to place the point at that end, but I wasn't really aware of huge temperature overshoots. I'll place my maverick on a few spots tonight to see if I can't diagnose what's what.

Looks great. I typically run about 12 hours for a 15lb brisket at 225F as well. Your grill MAY be running hot, but pellet grills typically cook faster than other smokers due to high amount of convection so your cook time is not unusual.

I've had some epic fails with brisket and yet an under/over done brisket can be used so many ways from chilis and stews to soup.Made some incredible tacos/burritos with my "fails".

Nice job. I always go fat down on briskets and butts when using my pellet smoker

I like to rest my briskets 3-5 hours. Glad yours turned out well, and fed everyone. Great job man.

TNJAKE said:
Nice job. I always go fat down on briskets and butts when using my pellet smoker
Click to expand...

I'll definitely do this on my next one. Fat up seemed to make sense to me, but when I read how Aaron's Franklins smokers usually project more heat downward, it clicked for me as to why he does it that way. With a pellet grill, all of the heat generates from the bottom and convects up and around...but I guarantee those heat deflectors are pounding the unprotected flat.

Looks great!
When are you going to start a Franklin smoker build?

smokin peachey said:
Looks great!
When are you going to start a Franklin smoker build?
Click to expand...

Oh man, don't tempt me. I've got plans for an offset that I think I even downloaded from this website a while ago. It's always been more of a pipe dream though tbh.

samcanadian said:
but I guarantee those heat deflectors are pounding the unprotected flat.
Click to expand...

I get better results in my pellet grill with fat up - but not all grills are alike. Really, the only way to know is try it both ways.

samcanadian said:
Oh man, don't tempt me. I've got plans for an offset that I think I even downloaded from this website a while ago. It's always been more of a pipe dream though tbh.
Click to expand...

You can do it, we can help!

bregent said:
I get better results in my pellet grill with fat up - but not all grills are alike. Really, the only way to know is try it both ways.
Click to expand...

How so? I suppose the only thing I was concerned about with my cook was the slight charring at the bottom. Everything else came out pretty good, aside from that. Even Franklin in his video mentions that there might be a bit of that after your cook, so maybe it's a non issue for me.

My grill has very even heat on the top/bottom, so I got no benefit from fat down. But I found that the melting fat on top will drip over the sides and keeps them from drying out. But you should try it both ways - it's the only way you will know for sure. Either way won't be a game changer - just a possible slight improvement.
You must log in or register to reply here.
Share:
Reddit Pinterest Tumblr WhatsApp Email Link