remsr said:
Nice plant I wonder if there is a way to grow them in Minnesota?

They do best at zone 7 or warmer. I live in North Texas and kept mine indoors during winter months. Might make a dandy indoor plant! B bdskelly said:
Morning Kev. Happy to see this post. Isn’t file from thr root. Dried and ground? As in it’s not like plucking a few leaves. You have to get to the root?
Keeps us posted on the bay rooting. The kids.... well you know. They always want something b
Click to expand...

No roots yet and its been a month and a half. Not really expecting any now. 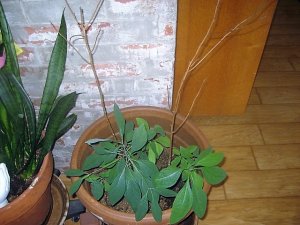 I had 2 sassafras each with about 5 leaves and they almost dies (Thats another story in itself). But the main trunk of the plant was still supple (bent without breaking). So I stuck 'em in dirt expecting them to die without leaves to convert food for them. Then amazingly out of the dirt around the original plant came out shoots. The roots were coming up as plants (I think that's called a rhizomes). Then a couple a months later I see plants on the other trunk. 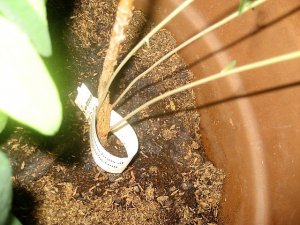 So figured I give 'em a year and then keep the best and cut back the rest.

It's the leaves that are ground up for the file. Its the roots and bark which are used for root beer. File is both a flavor modifier as well as a thickening agent. Although you don't cook it. If cooked it becomes grainy. Its usually served as a condiment at restaurants or sprinkled on top the rice before the gumbo is ladled on.

It was another of the reasons for the original trips to the "New World" like hemp.

It has long been used as a medicine. I understand that today's ecstasy is based upon it its active ingredient and it can cause hallucinations in quantity, (as well as death).

Birds and animals eat the berries, and the berries when consumed by pregnant women will cause miscarriages. It was what the mid-wives used for abortion in ancient days.

Root Beer was given a bad name when it was started to be man made. One of the active ingredients when given a gazillion times more than could be ingested was found to cause tumors in mice. Its why you used to hear the old timers talk about the old root beer, much as we talk about the old coke and soda pops, back when sugar was used.

remsr said:
Nice plant I wonder if there is a way to grow them in Minnesota?

I have read it is found wild on the mountain park trails in Connecticut. <shrugs>

But you know the Canadians, they even think Minnesota is cold.

Look at what 6 weeks can do! 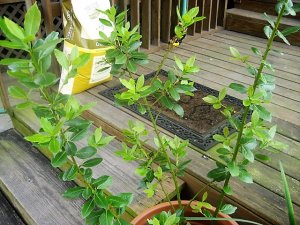 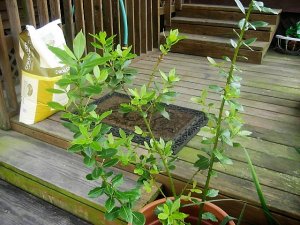 foamheart said:
I am sorry Richie, just saw this. When you sent it, it was sorta tuff around here. But....

Well, I am still working on rooting. If its going to root it should start them soon. I am rooting to give away, my plant has gone complete crazy growing! I'll get a picture tomorrow and stick it up. I did some pruning earlier this year and even the base of the plant is starting new shoots.
Click to expand...

Kevin no problem been thru it myself.Had some nice weather the last few days so,mine is outside getting some fresh air.Found a link on sprouting from stem,you know way more then I.
http://homeguides.sfgate.com/grow-bay-tree-cuttings-40064.html

foamheart said:
I have read it is found wild on the mountain park trails in Connecticut. <shrugs>

But you know the Canadians, they even think Minnesota is cold.
Click to expand...

That wild laurel is not eatable,get sweet bay bring it in in the winter
Richie

Wonder what temp zones that sassafrase will survive in. Need to look that up.
.... You know me. Monkey see ( Kev ) monkey do (Me).

tropics said:
Kevin no problem been thru it myself.Had some nice weather the last few days so,mine is outside getting some fresh air.Found a link on sprouting from stem,you know way more then I.
http://homeguides.sfgate.com/grow-bay-tree-cuttings-40064.html
Click to expand...

I wonder why they say to root in the fall at the end of the growing cycle? Thanks Richie, I would have gotten to researching sooner or later, I just always gotta do it my way first.

BTW I read an article last month that I have to try about rooting roses. Says to cut a active stem, dip it in ground cinnamon, and place the cut end in a hole you cut out of a potato. Then plant the potato with the rose extending above ground. That just doesn't sound right... I gotta try it!

bdskelly said:
Wonder what temp zones that sassafrase will survive in. Need to look that up.
.... You know me. Monkey see ( Kev ) monkey do (Me).
Click to expand...

It grows wild here everywhere. But then again, we got our first freeze in 6 years this last winter. I am thinking young and tender would freeze but some of these trees get monstrous. I Googled and saw pictures of a Sassafras in maybe Ohio that was labeled a Historic State landmark because of its size. They can and do grow into huge trees, I am guessing it helps when you don't try and kill them first though. LOL

Thanks that leaves me out, unless I grow one inside. Guess I’ll buy fresh at the grocery store.
Randy,

link said:
Why yes it is (good eye). My wife has lots of plants it is just starting to stay warm enough here to move them outside so they are all over the house.

I forgot the actual name of this Bay plant, I will get it tonight but you are correct it is pretty bushy and says it is a slow grower.
Click to expand...

So the name on the tag says Sweet Bay. This is the back: remsr said:
Thanks that leaves me out, unless I grow one inside. Guess I’ll buy fresh at the grocery store.
Randy,
Click to expand...

Grow it inside and keep it cut back, I understand it is a common Bonsai. So surely it will be fine in a pot inside. Thats is where most all of mine started. don't fear plants, an occasional water and tell the grandbabies to not pull 'em out the pot, the only other problem I don't have.... cats. Thank about it.

link said:
So the name on the tag says Sweet Bay. This is the back:
View attachment 362581
Click to expand...