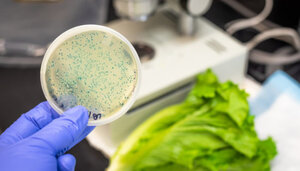 Officials are investigating another outbreak of E. Coli O157: H7 infections of unknown origin. It’s the third such outbreak reported in three weeks. Although the CDC says the cause is unknown, it also says recalled romaine lettuce has tested positive for the outbreak strain of the pathogen.
On Nov. 6, California-based Tanimura & Antle recalled whole heads of romaine from the following states: AK, OR, CA, TX, AR, OK, IN, NE, MO, TN, WI, NM, SC, WA, NC, OH, VA, MA, PR, and IL. The recall came after the Michigan Department of Agriculture and Rural Development found E. coli in the Tanimura & Antle brand romaine as part of its routine sampling program, company officials said in their recall notice.
The Centers for Disease Control and Prevention reported today that the strain found in Michigan matches that in confirmed outbreak patients. As of today, there are a dozen patients in the third outbreak. They are spread across six states. Five have been so sick they had to be admitted to hospitals.
“There is not enough epidemiologic and traceback information available at this time to determine if ill people got sick from eating Tanimura & Antle romaine lettuce. The investigation is ongoing to determine if additional products may be contaminated with the outbreak strain of E. coli,” according to the CDC’s outbreak announcement.
The CDC is working with the Food and Drug Administration on the investigations of all three outbreaks. The FDA today stressed that a cause has not been determined in the first two outbreaks.
“The strain of E. coli found in the Michigan sample is a third distinct strain not genetically related to the strains causing two distinct multi-state outbreaks of Shiga-toxin producing E. coli O157: H7 that FDA and CDC announced on Oct. 28. At this time, a specific food has not been linked to either of those outbreaks,” according to a statement today from the FDA.
Illnesses in the new outbreak started on dates ranging from Sept. 2 to Oct. 14. Ill people range in age from 8 to 62 years. Of 11 ill people with information available, five have been hospitalized. No deaths have been reported. The sick people live in California, Illinois, Michigan, Ohio, Pennsylvania, and Virginia.
The federal officials say it is likely that additional patients will be identified in all three of the outbreaks because of the time it takes between when a person becomes ill and when the illness is reported. This can take up to four weeks, according to the CDC.
About E. coli infections
Anyone who has eaten any of the implicated romaine (described here) and developed symptoms of E. coli infection should seek medical attention and tell their doctor about their possible exposure to the bacteria. Specific tests are required to diagnose the infections, which can mimic other illnesses.
The symptoms of E. coli infections vary for each person but often include severe stomach cramps and diarrhea, which is often bloody. Some patients may also have a fever. Most patients recover within five to seven days. Others can develop severe or life-threatening symptoms and complications, according to the Centers for Disease Control and Prevention.
About 5 to 10 percent of those diagnosed with E. coli infections develop a potentially life-threatening kidney failure complication, known as hemolytic uremic syndrome (HUS). Symptoms of HUS include fever, abdominal pain, feeling very tired, decreased frequency of urination, small unexplained bruises or bleeding, and pallor.
Many people with HUS recover within a few weeks, but some suffer permanent injuries or death. This condition can occur among people of any age but is most common in children younger than five years old because of their immature immune systems, older adults because of deteriorating immune systems, and people with compromised immune systems such as cancer patients.
People who experience HUS symptoms should immediately seek emergency medical care. People with HUS will likely be hospitalized because the condition can cause other serious and ongoing problems such as hypertension, chronic kidney disease, brain damage, and neurologic problems.
(To sign up for a free subscription to Food Safety News, click here.)
You must log in or register to reply here.
Share:
Reddit Pinterest Tumblr WhatsApp Email Link