If the gap persists, tack weld the door shut... Build a fire and heat the begeezus out of the smoker to relax the steel... Sooner or later it "should" relax the steel so it fits pretty good and minor sealing with gasket material will be necessary.... or remove the door and press it into the correct shape....

Hinges cut and re welded. Thanks for talking me into taking another look at them Dave. I have to much time and work into it at this point to to end up unhappy because of that. I'm also going to run a gasket around the door too. 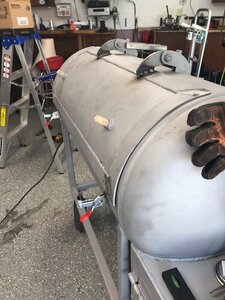 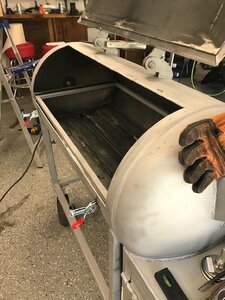 The small gap you see between the banding and the tank is just the gap in the banding. The door now sits in flush with the tank if you really get down there and look.

Looks much better.... You may not need gasket material.... Some folks have used HIGH TEMP silicone sealant to seal up minor air leaks... Gasket material that's too thick may open up a gap again....

One more thing.... When the smoker heats up, the door could twist or something like that and the body of the CC may interfere with the fit... If that happens, a grinder is your friend...
Cutting the door allows for the steel to try and seek it's memory... Heating and cooling causes the steel to move... After MANY heating and cooling cycles, it will settle in and provide you with many years of cooking pleasure ... Low fuel usage and AWESOME Q....

OH.... one more adjustment to look at, if needed..... Drill out the bolt holes on the hinges about 1/32" or so to allow the door to "move" and settle into place, if it's a bit tight.... All of these adjustments must be made while looking at the big picture... Where is stuff in a bind... where is it tight or loose... etc... ALWAYS use a lawn chair and a few iced down beer to contemplate your next move.... Patience is your friend when working on one of these as-built smokers...

Smoker is finished. Had the initial fire yesterday to let it burn for a while. got it up to about 375 then closed my vents down and it settled in at about 250. the right side was about 15 degrees warmer than the left, but I think as I play with it and get used to it I'll be able to use that to my advantage. I plan on doing a pork belly this week and I think the fat in it will really help to season in the smoker. 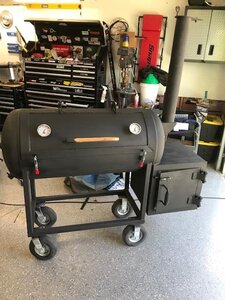 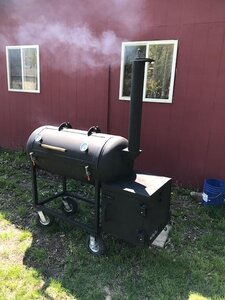 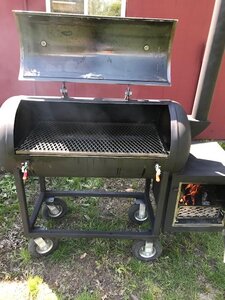 Need some help on fire management. I smoked some ribs on Friday for the first time in this smoker, and a 3lb corned beef brisket for good measure. Had a bit of bitterness to them and too much smoke. Still edible, but not great. I used oak that I was told was cut a year ago, but I think it was a little fresher than that, so maybe the moisture in the wood played into some of the problem.

I held temps in the cook chamber pretty well from 225-250. What I noticed is that I would come check on the fire every 35-45 min and find that the smoke had gone from thin blue to a slightly thicker smoker and that flames on the logs were gone to nonexistant. Once I jostled them around the a bit the flames would come right back and I would be in good shape for another 30 min or so. Exhaust and both intake vents wide open. This should be more than enough air intake. I have two hypothesis as to what going on.

1. I think the expanded metal on the bottom of the fire basket is too large and allowing coals to fall through to the bottom of the fire box. Basically the basket just had logs in it and all the coals and ash are about 4" below. So I'm wondering if the logs not sitting directly in the hot coals is allowing the fire to kind of snub out.
1.1 This is a pretty easy fix as I think I can just cut out another piece of expanded metal and run it perpendicular to the existing which will make the holes in the grate about 1/2 the size as they currently are to help keep the coals but allow the ash out.

2. Not enough air intake. I have about 20 sq inches of air intake for a 60 gallon cook chamber with a 20 gallon fire box. I think this should be enough but maybe not. I have 4.5" of intake higher on the fire box directly across from the cook chamber opening, and 15" on the same side at/below the fire basket level.

Try cutting your splits smaller.. about 2" square type splits... Watch them burn... look for water oozing out of the splits to see if they are not dried enough...

Thanks Dave. I will try that for my next cook. I didnt see or hear any water coming out during the last cook but I will watch again. My splits may be too large

Closer to getting this smoker figured out. Ran it on Monday with Oak for about 8 hours for some beef ribs that turned out great. I used the smaller splits, and tended the fire a little more and the smoker ran right about 250-275 all day. 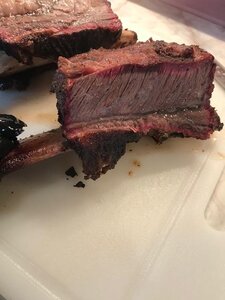 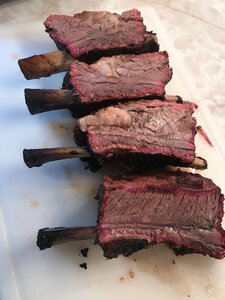 Wasn't really happy with the pneumatic casters I used. The sidewalls of the tires had to much flex in them, so the smoker had a little bit of back and forth wobble to it that I didn't like. Plus, I was an idiot and welded the casters directly to the frame.

So I cut the casters off and then made 4"x5.5" 1/4" plates to weld to the frame. Then I copied my template over and drilled 4 mounting holes. This way I can bolt my casters to the mounting plates, then if in the future a caster breaks or needs replaced I can just swap them out with out having to cut and reweld.

I snagged some really nice 6" stainless casters out of the scrap bin at work. 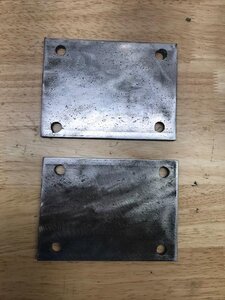 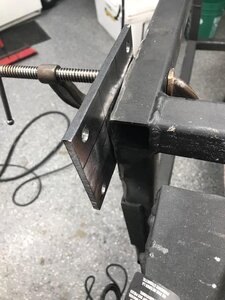 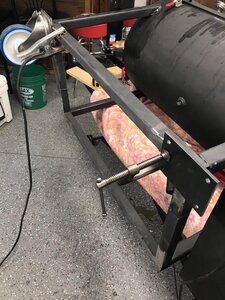 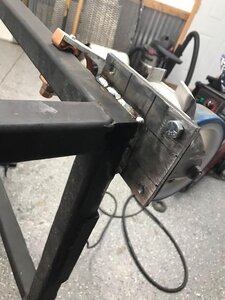 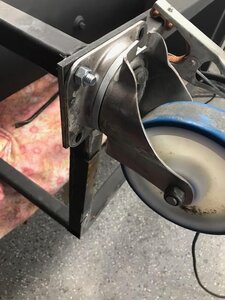 Has anyone applied Boiled linseed oil to their smoker over paint? My smoker is painted with high temp paint, but I'd like to cover it with linseed oil to help keep it protected. Not sure if it will bond over the top of paint and not directly to the metal.