Reseasoning Cast Iron Pan, What Did I do Wrong?

Hello,
I recently stripped my Cabela's ( presumably made by Lodge) 10" cast iron pan down to bare metal and sanded the cooking surface down with an orbital sander down to a smooth 80grit. I also removed the embossed Cabela's logo so it would sit flat on my stove top. The pan was completely bare of all the old seasoning, I made sure of that with the use of an angle grinder and wire wheel as well as rubbing alcohol to remove any grinding dust. I then seasoned it with flax seed oil according to the directions from this link.
https://www.smokingmeatforums.com/threads/the-ultimate-way-to-season-cast-iron-flaxseed-oil.137622
The only difference was I used the BBQ instead of the oven. All was well, the pan looked perfect, the cooking surface was like black glass when I was done, hard and not tacky at all.
The first problem arose when I tried cooking with it. The first run was some onions and bacon on medium heat. The surface was far from non stick, not a big deal, it was manageable with wooden spatula. The second and major problem arose when I tried to clean the pan. While I was eating I had put some water in the pan on medium heat so I could clean the pan when I was done. The water had just come to a low boil. I used the wooden spatula to lightly scrape off the food residue when the flax seasoning just came off with no effort at all. I would say 70% came off. All the seasoning on the sanded surface was soft.
At that point I just sprayed the pan with some oil to prevent any rust, poured a glass of scotch then called it a night.
What could have caused this? I know the pan was clean before I started seasoning. The final paper towel I used was so clean I could have dried it and reused it. I followed the directions to the letter ( aside from using the bbq of course). The seasoning on the bottom and sides of the pan seem to have held up. I was hoping to snap of picture this morning but never got the chance so I will do that once I get home.
Any ideas?

I have all lodge and 1 CI 6 inch that is not lodge. my Lodge CI holds seasoning.... but that 6 inch CI will flake the seasoning right off. I trashed a non Lodge CI with ridges because it would not hold seasoning. I figured these were china made pans with bad CI...

The flax seasoning was recommended by all sorts of professional sites, including the folks at Cook's Illustrated. However, for many people it has turned out to be a really bad recommendation, for exactly the reason you found: the stuff flakes off.

I just quickly re-read half a dozen posts on this subject, and some of them still recommend flaxseed oil, but the newer posts mention all the problems people have had with the stuff flaking off and now claim that these people didn't use the "right" flaxseed oil. I'll leave it to you to read these stories and see if you can get a more pure form of flaxseed oil, but the gist of the stories is that some of the brands contain contaminants which lead to flaking.

[edit]Here's one good story on what I just described. It includes ideas on how to solve the problem:

I Seasoned My Cast Iron Pan with Flaxseed Oil, and Here's What Happened

P.S. Speaking for myself, you couldn't pay me to use flaxseed oil. It is, of course, a very trendy food right now, with all sorts of supposed health benefits. My wife bought some flaxseeds to put on cereal, which I did.

Back in the 1950s my parents would have the house painted and the painters mixed their own paints from turpentine and linseed oil. Flaxseed is the edible version of linseed oil. To me, the stuff tastes and smells exactly like that old paint used to make my nose and tongue feel when I walked around the house while they were painting.

I learned a great trick to clean iron skillets and stainless skillets. Once you are done cooking, just put some course salt in it and I use a green scratch pad (nothing too strong) and just a little water and the salt cleans up everything great. I heard flax seed oil is good too. The only thing I can think of is maybe the pan wasn't hot enough when you put the food in it which made it stick. Plus, you have to give it some time for the meat to release from the pan when it's cooking.

The thing is, it didn't really flake off. Its almost as if the seasoning on cooking surface had somehow softened and then separated when in the water. Almost like a gravy skin look if that makes sense. The inner sides of the pan that were also exposed to the hot water were fine. The outside of the pan, including the bottom which I also sanded appear to be fine.
If it had flaked off in hard pieces I would have suspected surface contamination, but as I said the surface was well prepped.
Here is the oil I used, it says its 100% pure.
amazon" style="max-width:120px">

I've never heard of anyone stripping a pan the degree you did. Maybe that's the reason? I'm not sure.

He stripped it to attain a smooth surface. CI from Lodge today as a ruff surface to help in factory seasoning.
S

What temperature was your BBQ during the reseasoning? If it was too hot, that may have affected the polymerization process.

My thought was that you made the pan TOO smooth causing the seasoning not to stick as well as it could. This may have allowed the hot water to get "under" the seasoning allowing it to become soft.

That's a good point b/c if memory serves, when an iron skillet is unseasoned, you can see the pores.
S

oldsmokerdude said:
My thought was that you made the pan TOO smooth causing the seasoning not to stick as well as it could. This may have allowed the hot water to get "under" the seasoning allowing it to become soft.
Click to expand...

That is a definite possibility.

I don't think the temperature ever got above 500f but it could have possibly spiked as high as 525f when I wasn't looking.


oldsmokerdude said:
My thought was that you made the pan TOO smooth causing the seasoning not to stick as well as it could. This may have allowed the hot water to get "under" the seasoning allowing it to become soft.
Click to expand...

I was thinking the same thing however I watched a youtube video where they went all the way to 220 grit without a problem. This does make sense though.

Can't help you with the flax seed oil. I've always used peanut oil on my CI and never had a problem.
Gary

This thread got me thinking. My son used one of my grandmothers old CI pans to catch the oil from his car during his last oil change( I was not a happy camper). Is it possible to burn it off and reseason it somehow or is it a complete loss?

Wash with dish soap and burn off any residual oil cook fried potatoes for son. Repeat until son no longer gets the s**ts. Re-season and use for the rest of the family :cool:

Here are the pictures I promised, The cooking surface looked the same as the bottom before I cleaned it. 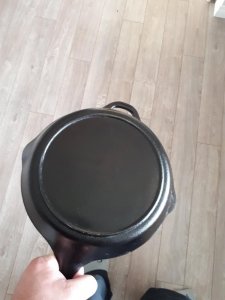 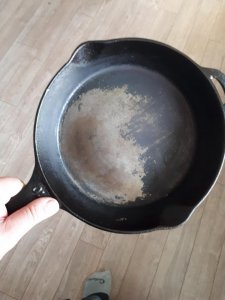 Look for the Kent Rollins videos on cast Iron . It worked for me , as I was having trouble with a new Lodge skillet . I used his methods and had great results . He talks about sanding in one of the videos .

gmc2003 said:
This thread got me thinking. My son used one of my grandmothers old CI pans to catch the oil from his car during his last oil change( I was not a happy camper). Is it possible to burn it off and reseason it somehow or is it a complete loss?

Gosh, I wouldn't worry about cleaning off motor oil. Just scrub it really well using almost-boiling water and dishwasher detergent. That combination will remove all traces of the motor oil. Then, re-season.