I just added this new PK100 Electric Smoker from Pro Smoker to my stable of smokers/grills. This one will be primary for two things, smoking at super low temps in the 140-150 range for cured sausage, snack sticks, bacon, jerky etc., and since it can go that low and is fully insulated, it will also double as a warming cabinet for overnight heated rests on briskets, pork butts, ribs and other things. I was turned on to this unit by several of the BBQ Youtube channels I watch, including Smokin Joe's Pit BBQ, Smokey Ribs BBQ, and Dead Broke BBQ which have all given excellent reviews of it.

Did some testing on it today and am super impressed so far. Build quality is awesome, its 100% stainless steel, and as previously mentioned it's also fully insulated. It comes with 5 16x16 stainless steel racks, but has room for 6, and it also has a drip tray that slides in the bottom which if you didn't need the drip tray you could put a 7th rack, although I prefer the drip tray and 6 racks is more than enough.

I tested it today using ambient probes on the top 4 racks with my Fireboard, and found all four racks were within 1 degree of each other, and the temp swings are not bad at all. I've only ran it from settings between 130 and 150, and at 130 the swings were +/- 2 degrees, while at 150 they were closer to +/- 5 degrees. The only thing that is annoying is it definitely runs a little hotter than the set temp, usually between 8-10 degrees. That's not a huge deal though. For both sausage and hot holds I prefer to run at 142 degrees, and setting at 134 gets me to an average temp of 142 so that works.

My main concern before purchasing was the way smoke is generated. It uses and old electric stove type coil burner to generate the heat, and you sit a stainless steel bowl on top of that filled with damp sawdust to generate the smoke. Well... temps in the summer can easily get to 110 degrees here, so trying to run at 142 degrees is only an increase of 32 degrees, meaning the coil is not going to be working very hard at all, and I wasn't sure if it would get hot enough to generate the smoke from the saw dust pan. But I took a gamble because I have an old A-Maze-N pellet tray which I thought would do the trick, which I used years ago with my very first smoker, a Masterbuilt MES 30 that eventually died. I tested the A-Maze-N tray in the smoker today and it worked absolutely flawlessly. Much better than it ever did in the MES, although that is probably because there is a damper in the door right by where I'm sitting the tray, so it has plenty of access to oxygen. And I like that with this setup the cabinet generates the heat, and the the A-Maze-N tray generates the smoke independently.

Anyways, as I said already, I'm super impressed by this thing and can't wait to smoke my first batch of sausage in it! I smoked a brisket on the offset yesterday, and while I wasn't able to do my hot hold in it for this one since I hadn't done the necessary testing yet, I do have plenty of brisket trim so a batch of sausage will be coming up some time this week! 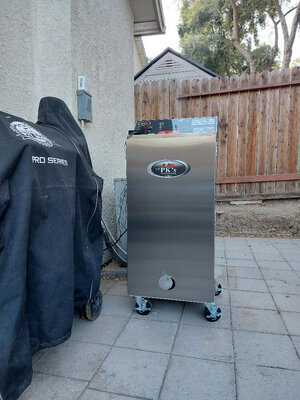 Nice review, thanks for sharing and enjoy your new toy!
Reactions: kevin james

tbern said:
Nice review, thanks for sharing and enjoy your new toy!
Click to expand...

Thanks! I think this thing is really going to be great for it's intended purpose.

If I had to list any dislikes about this unit these would be it:

1. The average actual temp runs about 10 degrees hotter than the set temp, so you need to compensate for that which sucks, but that's easy to do so not a huge deal.

2. For the price, I really feel like the controller should have WIFI capability, but I have a fireboard which is WIFI so I can still check temps on my phone.

3. If someone were using this as their primary smoker (which I am not), I think the rack size is a little small at 16x16, as a raw full packer brisket would be difficult to fit unless you trimmed it way down length wise. I think it would be much better if the racks were 20x20 to give a little more room for larger meats. Not an issue for me though as briskets shrink considerably during the cook and it works fine for hot holding a fully cooked packer.
You must log in or register to reply here.

Quick, easy, and removable Mod for my new PK 100 smoker

Different diameter sausage in the smoker