Quick summary: My smoker was complete weak sauce. I bought a $10 hot plate from walgreens, removed the old 250 watt smoker element, and from the hot plate I took out the much larger element and the variable controller, drilled some holes, plugged some things in and now I have an insane 1000 watt variable controlled man-machine.

Awhile back, I had an experience where I saw instructions online on how to make a smoker from clay / terracotta pots.  I never had a smoker before - but it seemed easy.  As soon as I saw the instructions, I developed an insatiable manly appetite for smoked food. Patience went out the window and I was determined to smoke some dead animal and stuff my face with hickory infused flesh THAT day.  So instead of building something, I got on the mecca of local online classifieds listings here in Utah, - KSL.com - and I found a cheap entry-level smoker called the Little Chief for $40 (but since then I've seen some go for $20).  I brought it home, and smoked some fish.  It was love!  It was great!  And it satisfied the beast within - but only to a certain point.

After smoking a few things, I realized that something really was missing. The problem with the Little Chief is that, if you're lucky, your temperatures inside will get to maybe 165 degrees.  This is sort of useless if you want to smoke anything serious, like a whole chicken (from what I read, the internal temperature should be 220) .  For me it was frustrating, and because I'm on a serious student budget I couldn't justify buying another smoker.  Somehow today, I remembered how the clay pot smokers were able to achieve very high temperatures with cheap hot plates from Walgreens.

So I set off, got the 1000 watt $10 hot plate from Walgreens - super simple to take apart.  Then I went to the Little Chief and removed that weakling 250 watt element. After that, I removed the element and the temperature control from the plastic housing on the hot plate, took the element over to the smoker and realized I'd need to drill an extra hole on the bottom of the smoker due to where the plug-ins on the new element would go if I wanted it centered.  So I drilled a hole, adjusted the element to be in the right position, and used a self tapping screw to secure that bottom plate to the bottom of the smoker.  I plugged in some things, and boom. This is what I have: In the picture above, the old element is on the left.  The new one is secured.  Keep in mind, the element 'guard' or 'bowl', is underneath those tabs that would keep the chip pan in place and the element itself is just above them.  What I should have done is worked on the placement a bit better, but this will do the trick perfectly fine. By far this is my favorite thing.  My little chief now has a crazy-awesome temperature controller. Sorry this picture is blurry.  You can see what I did on the underside.  Everything fits nicely in that 1.5 inch clearance.

More details will come!  I literally just finished this and I find it so awesome I just had to share it with everyone.

How'd it do? A moment ago I gave it a quick run to see what I was dealing with.  The chip pan slid on very nicely, I set it on HIGH and walked away for literally 2 minutes - I came back and my smoker was absolutely billowing with mesquite smoke! So, I probably won't need to set it that high again!  It was crazy.  I'm going to get a good thermometer tomorrow to let you know what temperatures are possible.

OP Theory,
Thank you for posting this information and these pictures. I have the same model Little Chief with the same element. I would like to do the same modification of the element. I bought a warming plate and I see how you did things. My question is did you use the cord that came with the hot plate or did you wire in another cord? Any other helpful tips would be appreciated. An oldie but goodie!

10 years later and the information was right on 'que. Saw an original Little Chief in it's original Charred cardboard box at the thrift shop, and away we go. Keep an eye out for the new thread.
Reactions: daveomak

Doesn't the bottom of the little chief get so hot that it will melt the wiring?

Shouldn't be any hotter than the original hotplate. PICs up soon,

CanuckBob said:
Doesn't the bottom of the little chief get so hot that it will melt the wiring?
Click to expand...

Bob, morning.... No it does not get hot... The bottom of the Totem Smoker is vented, unlike the other brand...
AND.... If you look to the left side of the pic, above the red light housing, you will see the original thermostat that came on the table top burner... as the bottom of the smoker heats up, the thermostat turns off the power.... In order to control the smoker temperature, I set it on a sheet of plywood to hold the heat in, where the thermostat is.... Works like a charm....
I also insulate the smoker to get consistent temps.....

Modifying a Totem/Big Chief Smoker with a Hotter Element for Colder Climates and Hot smoking....

Several years ago I moved to a cold climate and my smoker would not get hot enough to smoke fish in the fall... even wrapped and insulated it wouldn't get hot enough to kipper salmon..... So here we go on my modification.... Went to W-M and found a single burner counter top unit for about... 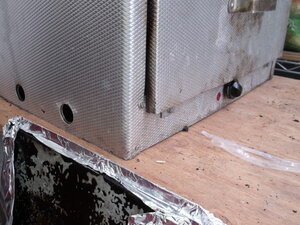 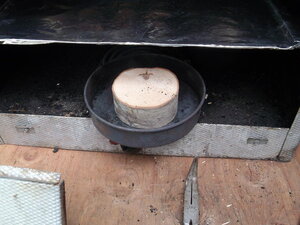 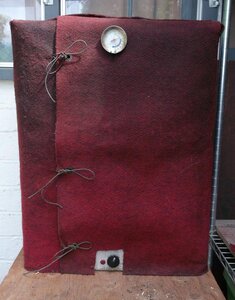 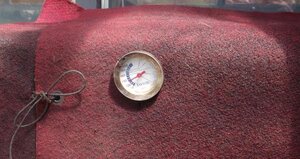 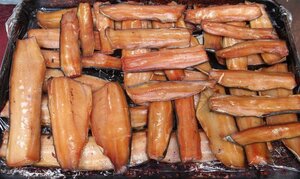 However please note Dave's wiring mostly had fiberglass sheathing like this or this or this or this. (Used to be real common in incandescent wiring fixtures before LEDs took over.) I'd suggest keeping a very close eye on the wiring and if it gets brittle at all, get some thermal sheathing or rewire it with teflon-insulated wire. Otherwise, the insulation gets brittle, it chips off, and you'll get wire-to-wire or wire-to-ground shorts.
Like Dave says, even electric box smokers need some small fresh air intake at the bottom. But instead of just drilling holes, put copper tubing in the holes that lead to the wiring. Then the cool air that's sucked in is blowing first over the wires. If even that doesn't work, place the smoker on a thermal conductor (like a large 1/4" aluminum plate) instead of an insulator like wood or tile.

CanuckBob said:
Doesn't the bottom of the little chief get so hot that it will melt the wiring?
Click to expand...

If one was worried about the wiring getting too hot, you could always add more airflow by raising the smoker onto 4 small blocks (1 each corner).

You may have to. My big chief with the stock element has no wires running underneath and gets hot enough to melt plastic. I know this because I had mine sitting on a plastic counter and it melted it. Just saying.....

Here's a pic of my Big Chief being elevated on 4 small wood blocks at the corners. The 1000w heating element is from a Proctor Silex single burner. Guess I don't do enough fish...I didn't appreciate 150F temps are that common. Still, even if the temp at the food is 150, close to a hot element it can be considerably higher, so I think it's always prudent to check your wire insulation on occasion. That probably goes double for home-brew or "commercial-but-improved" smokers. Speaking of which...

I have a smoker whose main heat source is a clothes dryer filament. I could never get wire insulation to hold up on the 12AWG wire powering it. I ended up stringing cheap ceramic hobby beads on solid copper to insulate them for the hottest 6 inches or so.

I decided to go super Ghetto and Quick just for theory. I have already decided this just the beginning. But, here is what we got going so far..... Quick , Dirty, but functional. Smoker was a $15 Thrift Store find. (With Original 1980 Manual) and the HotPlate was $13 bucks at Wally World. MOST IMPORTANT: FOR ELECTRICAL SAFETY YOU MUST USE 3 PRONG POWER CORD AND WIRE IT IN THE PLACE OF THE ORIGINAL POWER CORD AS WELL AS CONNECTING THE GROUND WIRE TO THE NEW CORD AS WELL.

Initial proof of concept was a success. But I couldn't stop there. We decided to turn it to Eleven.

I decided to add digital preeeeeeeecision. I decided I am going to add a PID controller to the setup. I am using this one from Amazon. I will post update soon ( as of 8/09/2020).

Let us know how it goes. Hoping the hot plate has a 3-prong plug and you're maintaining all metal parts at green-wire ground that aren't designed for current. As always, it's a good idea to use a functioning GFCI receptacle (or adapter) for any outdoor "appliance".
Reactions: guido989

bill1 said:
Let us know how it goes. Hoping the hot plate has a 3-prong plug and you're maintaining all metal parts at green-wire ground that aren't designed for current. As always, it's a good idea to use a functioning GFCI receptacle (or adapter) for any outdoor "appliance".
Click to expand...

I had that in the mix. Half way through the process I had a change of plans...... I'm turning it to ELEVEN.

That pile of fish is seriously making me drool! And where did you get the insulating blanket?

drewb0y said:
That pile of fish is seriously making me drool! And where did you get the insulating blanket?
Click to expand...

That's a hunk of marine carpet... Anything will pretty much work... I like that carpet because it breathes... no backing.. You can see light through it... It's meant to be glued down....
You must log in or register to reply here.