So i trolled around a bit for a week or so and found someone selling a 5-or-6-year-old camp chef SE for $50.

Filthy but totally functional. Basic knob control with an LED that is red or green.

The pizza oven attachment was not a complete slam-dunk. The fire pot is a little bit more forward in the camp chef, or the shelf for the grate has a little more depth, or both.

I went to the habitat re-store and spent a dollar on a random painted steel angle bracket of about 2"x1"x23" and cut it down to roughly 22" length, and this allowed me to mount the GMG pizza oven attachment without drama or much risk of it becoming a fiddly issue.

It looks like maybe the camp chef has to be set to "hi" for my napoli style pizzas. 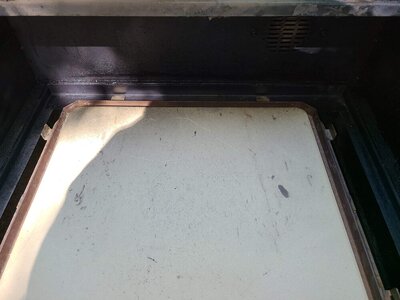 Looks good.
You must log in or register to reply here.

Finally found the Pellet Smoker to complete my smoker arsenal!

I Need a New Grill/Smoker

General Discussion Tuesday at 1:16 AM
tallbm

Rotisserie in your pellet grill