Still in a festive holiday mood, with cold nasty weather and not just really feeling that good, sitting in the house a fella's mind sort of wanders and ya know you gotta follow it when it does. Mr. Skellys trip to Corsicana for fruitcakes made me think. And since I had a stale loaf of French bread on the counter why not? Its accompanied with a Bourbon Maple sauce which I love.

Believe it or not, I had candied pineapple and candied green cherry in the reefer (I have no idea why there would be green cherries), left over from years ago an attempt to make a fruitcake as good as those from Corsicana which I decided needed a lot more rum soaking..... LOL It wasn't nearly as good but after the first piece no one ever cared anyway. LOL

These are in the reefer for friends. 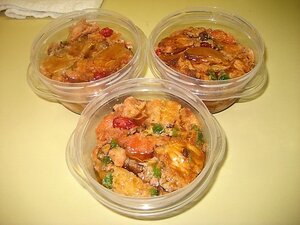 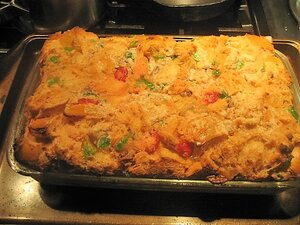 Came out pretty good, its another bread pudding to add to the Armory. Besides since last week was Kings Day, it's more time now to start with the King Cakes.

BTW I want to tell you folks about something I was gifted a year ago and love!! Its Burtons Aged maple syrup. We don't have maple syrup in the south. This stuff is aged in used whiskey barrels, its an amazing blend of aroma and taste. Maybe the folks here from the north know about it, but it was totally new to me. I have some fresh ribs in the reefer that are going to be glazed (sparingly for sure LOL), with it. If you need something special for someone who as everything, I can't recommend it more highly.

Check them out here. I have only used the "Kentucky Bourbon Barrel Aged Maple Syrup". Can't wait to try the Hatch pepper flavor.

NICE! I think I have made bread pudding with about everything-but never made one with fruit cakes...awesome! bet that is the bomb with rum sauce! Like!

Dang glad somebody figured out something to do with fruit cake.
It looks great foamy. Some ice cream on top would work

Awesome Foam, that looks great and will have to check out that syrup!

Hmmm---Looks good from here!!
I haven't even seen a Fruitcake for many years.
People around here just gave up on them.
Nice Re-work!!
Like.