SmokinAl said:
A charcoal starter works really well. Just put a grate on top & it will sear in a minute!
Click to expand...

Yup . I just started doing them start to finish over all wood chunks . 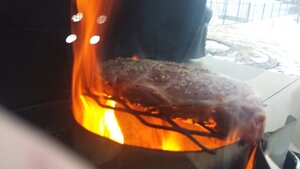 If I want more smoke , 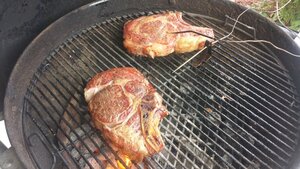 And don't close the lid or cover when searing.

If your doing a small steak. A charcoal starter works really well. Just put a grate on top & it will sear in a minute!
Al

SmokinAl method is what I use. I sear steaks for about a minute per side. A little longer for burgers.

Recently I've taken to doing 1&1/2" thick boneless ribeye steaks ( I cut my own from whole primes) on the Vortex, 70-80 seconds a side, done! Take the steak off, let it rest five minutes, eat. Perfect sear and just the way I like them, on the rare side of life. RAY miserkris said:
Great, what does the ribbed CI do that the flat CI doesnt? Just lines on the meat?!
Click to expand...

The ribbed one will give you "Grill" marks. They work good. Just pita to clean. The Lodge pans you have now will need to be cleaned of rust. Then get seasoned. I would use a scour pad, one of those green ones. And wet the pan and then add salt. And scrub the rust away. Rinse very well. Dry with paper towels. Then place them upside down in your preheated 375 degree oven for a hour. Remove and let cool. Them give them a good rub with vegetable oil. Just a thin coat over the entire pan. Then put it back in your 375 degree oven for another hour. You should probably do the seasoning twice on them. Just let them cool and add the second coat. Then another hour in the oven.
Last edited: Sep 27, 2020

miserkris find a place that sells cast iron and buy the pack of scrapers . It will have one that fits the notches in the grill pan . It was a pain at first , but the more you use it the easier it will be .
S

miserkris find a place that sells cast iron and buy the pack of scrapers . It will have one that fits the notches in the grill pan . It was a pain at first , but the more you use it the easier it will be .
Click to expand...

Chainmail scrubbers and stiff plastic bristle scrub brushes work good too.
Those are what I use on Lodge Sportsman CI grill grate.
Follow up with a light coat of canola or vegetable oil.

I think when doing a reverse sear in a cast iron skillet, you should do about 1 minute per side in a very hot pan.

gmc2003 said:
Yup, your steak was already at medium when you started the reverse sear. Try Chops advice and start the searing process at 120*, or sear it first then cook to desired temp. I gave up on reverse searing for that very reason. Overshooting the temp.

I see... interesting !.....So for thin meats the initial SEAR might fully cook the meat it self , if you get the color you need and temp you need !

Do you all sear just steaks or also pork chops, chicken ( what meat though ,, breast?), fish etc ?

I use both a flat CI and the one with the ribs, both by Lodge. It looks like you've resurrected your old CI. Since they never wear out, that is sensible.

You need to pay very close attention to the temperature of the skillet if you want to get good results. There are two ways to do this.

If you have a point-n-shoot IR thermometer, you can use it to read the surface temp of the skillet. You want it REALLY hot. Some suggest a temperature as high as 500 degrees.

If you don't have an IR thermometer another, perhaps even better way, to heat the skillet for searing is to put it in the oven, with the temp set to between 450 and 500. Leave it there for at least twenty minutes, while your steak cooks outside. This does two things. First, it gives you a way of getting the correct temperature without owning an IR thermometer. More important, however, is that it gets the skillet uniformly hot. CI is notorious for extremely uneven heating. With my IR thermometer I regularly see 100-150 degree differences across the surface of the pan.

I use the ridged pan mostly for panninis. but also for steaks which I cook from scratch on the CI skillet rather than simply finishing them there. The grill marks are nice, although I don't think they make it taste any better. More important is the ability to get the fat and moisture away from the meat so you neither stew nor fry the meet.

Finally, if you have lots of money, or you have a son who likes to treat his dad at Christmas (which is how I got mine) you can get a Searzall torch. Others have suggested a weed torch, or just a regular butane torch, but both can impart a flavor to the meat. The Searzall heats a mesh which then re-radiates the heat to the meat. For me, it was a total game changer. I can now get a better sear on a steak than I ever got on the grill on on a CI skillet. I use it on lots of other things, like getting a nice brown on mac 'n cheese. The other big advantage is that you have total control over how much browning you get because you can instantaneously see the meat (or mac) turning brown.

[edit] I just saw the post about CI searing possibly over-cooking the meat. That is indeed a real possibility and is another reason I have become such a fan of the torch: it get the meat extremely hot at the surface, but doesn't have enough total energy to heat up the inside of the steak very much. You still have some residual cooking from the hotter exterior (from the cooking, not the searing) continuing to penetrate the meat for 10-15 minutes after you pull it from the grill, but that is nothing compared to what the scorching on the CI pan will do. So, when you sear on the pan or griddle, pull the steak at least one step below your desired doneness, e.g., pull it at medium-rare if you really want medium.

miserkris said:
I see... interesting !.....So for thin meats the initial SEAR might fully cook the meat it self , if you get the color you need and temp you need !

Do you all sear just steaks or also pork chops, chicken ( what meat though ,, breast?), fish etc ?
Click to expand...

Correct, thinner steaks like flank are basically fully cooked by the searing process. Not to mention some of the T-bones and Porters we've been seeing lately.

Sometimes I sear pork chops and sometime I don't. Chicken parts are all done with high indirect heat. Fish is also done with indirect heat - just not as high a heat as chicken. It also depends on the outcome your looking for. This works for me, others will do cook them differently.

Probably already mentioned, but dont let rust worry you. I use oven cleaner, some steel wool, soap and water, then season with some oil. Scrub it out then heat up and rub some oil in to season. Cast iron is probably the safest best, I dont grill lots of fish, but I'm nervous about it falling apart on me. And ghee is nice for an oil to sear in.