Steve H said:
Hey all. I was gifted a Hi Mountain Jerky King set up from a friend after I helped him on some wiring.

Now, I've seen these before. And the one from TSM. But was dubious about how well they worked. So didn't buy one.
So, I opened it up. And rubbed the board down with mineral oil as recommended. I used butcher block treatment.
I didn't take any pictures while using it. I used the 1/4" side of the board. And it worked great. Much better then I thought. The slices were uniform. And the knife just glided through the meat with little effort. This is easy!
Then, I went and mixed the Mesquite seasoning to it. And let it sit for 24 hours. This morning. I put the meat on my jerky trays. I put it in a preheated 325 degree oven until the meat hit 160 degrees. Then lowered the oven temp to 170 and left the oven door cracked open. It was done in 7 hours.
View attachment 459512
I've had the Hi Mountain jerky mixes before. But this was the first time with their mesquite kit. It is very good. Ignore the pickles. I just got done making them too!
If you are just doing a few pounds of jerky. Then this jerky cutting board and knife is the perfect answer instead of breaking out the meat slicer. Then having to take it apart and clean it. It only took a few minutes to do this 3.5 pound batch. And only two things to clean. The knife came with a pretty good edge on it. But I still ran it through the sharpener. Though it really didn't need it. If I knew then what I know now. I would have bought one ages ago. So much easier than using just a knife. Or using, then cleaning the meat slicer. I give this a 5/5 with no cons.
Click to expand...

Apologies for digging up an old post. However, I’m intrigued by your feedback. Thanks for sharing.

I cannot tell if the board that you have in this kit is the same as this board? Or, is it different? 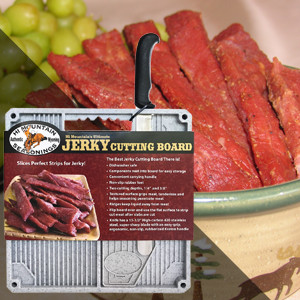 illini40 said:
Apologies for digging up an old post. However, I’m intrigued by your feedback. Thanks for sharing.

I cannot tell if the board that you have in this kit is the same as this board? Or, is it different?

No problem, that one is different. But I'm sure it does the same thing. Mine is all wood. Where the one you posted is plastic. And dishwasher safe. They both have the same thickness choices for cutting the jerky.
You must log in or register to reply here.
Share:
Reddit Pinterest Tumblr WhatsApp Email Link