Well, I've been lurking here for awhile, and finally found the perfect fridge(pic below) for my cooling chamber in the local classifieds. It's a large wine cooler. Was a bit dirty and had some scuffs, but a little soap, water and elbow grease and it looks as good as new. I was hoping to get some advice/assistance from those that have done this before. I will be trying to cure coppa & Sopresata.

1. What is the target temperature and humidity i'm trying to maintain?
2. I've put a pan of water in the fridge with a fan, and it seems to keep the humidity around 70-75%. As soon as the compressor kicks in, this drops rapidly to 53% before climbing again. Whats the best way to deal with this?
3. Is airflow needed in the chamber?
4. I read some people have a type of air exchange. Can someone explain? Thanks for your time...

Access port drilled in the side. Used a cork and babybel wax to seal it off.

May I recommend ...... I posted an introduction to fermentation in his book.... Chapter 20 - Fermented Sausages Introduction Cold smoked and fermented sausages are grouped together as they are so closely related. For example fermented spreadable sausage such as Mettwurst can also be called a cold smoked sausage. Polish Cold Smoked Sausage is basically cold smoked salami or cold smoked dry sausage. All cold smoked sausages once sufficiently dried become North European versions of traditionally made Italian salami which is usually not smoked. Traditionally, the production of fermented meats relied on bacteria present at the butcher’s premises. The facility developed its own microbiological flora in which microorganisms lived all over the establishment. Meat brought from outside had already been infected with bacteria. At some places the slaughter of the animal was performed right on the premises, which also contributed to new bacteria infecting the meat. Summing it up there was no shortage of microorganisms and this combination of bacteria from the meat and from the premises often created favorable conditions for making fermented sausages. Plants developed different bacterial flora and sausages of different qualities were made depending on the location. In the past meat facilities were not sanitized as scrupulously as the ones of today, which helped create more favorable conditions for the bacteria to survive in the plant. These conditions were unique to each establishment and it was impossible to duplicate them somewhere else. By the same token, sausage makers were unable to produce a fermented sausage in two different locations that would have exhibited the same quality. Some places in Italy developed a specific flora which was instrumental in producing a high quality product of a peculiar taste and flavor. Such establishments suddenly developed fame and a brand name for making wonderful meat products. They probably were not better sausage makers than their counterparts working in different locations. They were lucky to have their shop located in the area which was blessed by mother nature for making fermented sausages. They did not have much clue as to what was happening, but passed this empirical knowledge to their sons and it worked like magic. Until the second half of the XX century, the manufacture of fermented sausages was covered with a shroud of secrecy. One of the secrets was known as back slopping, which was reusing a part of the sausage mass from the previous batch. Such inoculation helped to produce a sausage of the same quality as the one previously made. Unfortunately any defects that were acquired in following productions would be passed along, and the method is seldom used today. Climatic differences were a significant factor in the development of different methods of smoking, drying, and preserving meat products. The best time of year was when temperatures were cooler and mildly humid. In the summer, higher temperatures and lower humidity did not favor the production of high quality sausages. The South had a drier climate with steady winds, and the best air-dried hams originated there (Spanish Serrano, Italian Parma). In the North, the weather was less predictable with cooler temperatures and higher humidity. Those conditions were ill suited for making air-dried products and smoking became the preferred method. For those reasons Mediterranean countries produced slow-fermented sausages that were only dried, and countries in Northern Europe produced fermented sausages which were smoked and dried. Modern production is independent of outside conditions and parameters such as temperature, humidity, and air speed are computer controlled in sophisticated drying chambers. This latest technology, combined with a universal use of bacteria cultures, permit producing fermented sausages of constant quality at any time of the year. Even so, the manufacture of fermented products is still a combination of an art and technology. The preservation of meats by fermentation has been practiced for centuries and traditional practices rely on indigenous bacteria present in meat and in the environment. These techniques are being replaced by the application of commercially grown starter cultures. Fermentation technology has become a huge part of food science and to be able to choose the right culture for a particular product, requires a basic understanding of microorganisms and their behavior.

Thanks ive been looking for something like this, I have ordered the book. It seems to have some good info, but will it answer my specific questions above?

Yes... I have the book and Kindle addition... The kindle addition is upgraded as changes are made to the book... Marianski, in my opinion, follows FDA rules, where some other sites often have directions that are not safe...

Dave, I have started to read the book. Specifically "curing temperatures" -- It mentions that curing should be done at 36 - 40F. Is this what most people do? I know for a fact several people use 55, which he specifically says is too high. Just trying to make sure I dont misunderstand.

Curing temperatures.... OK, there are several different chemistries for curing.... Curing sausage, curing whole muscle meats, Charcuterie, Fermenting meats... etc...
"Generally", when cure is added to fresh meat, the first couple weeks are in the refer to inhibit bacterial growth while cure/nitrite works...
Some types of curing using cure#2, after the initial cure step below 40F, the temperature must be elevated to allow the natural bacteria in the meat to convert the nitrate to nitrite and continue with the protection afforded by the nitrite...
You CAN NOT mix methods or chemistries...
Curing meats is a science....

A complete understanding of ALL the chemistries and methods should be understood and not mixed...
Reading and understanding the individual methods is where to start...
Whole muscle meat is basically "sterile" in the middle... bacteria is "only" on the outside baring any contamination from handling... Slaughter house, packing house, butcher, the home kitchen.... All are points of contamination...
M

Well its coming along. Both humidifier and dehumidifier installed.
. 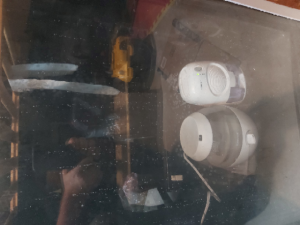 Wiring about as neat as im gonna get it. 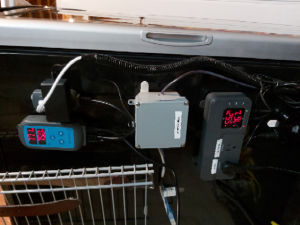