I bought a Pit Boss Austin XL recently and had been enjoying it. It had turned out some pretty good food. But then a softball sized chunk of paint peeled off inside the lid. I wasn't particularly happy about that so I loaded it up and took it back to Walmart. My idea was to swap for a new Austin but they're sold out.

Walmart does have the Cuisinart Woodcreek and it actually looks pretty decent. I guess they had the Cuisinart all along but I passed right by it thinking it was a propane grill.

I guess my initial reaction is that the control panel seems pretty cheap but it wasn't like the controller on the Pit Boss was super high quality.

Anyway there aren't too many reviews online. Girls Can Grill likes hers but she's also a paid endorser. Chef's Bonus also seems to do pretty well with his.

I see at least a couple people here running the Woodcreek and I welcome any feedback. Any regrets? Any QC issues?

There is no paint on the inside lid of my Austin LX, never seen any smokers where paint is on the inside of a grill or smoker, would bet it was creosote
T

mike243 said:
There is no paint on the inside lid of my Austin LX, never seen any smokers where paint is on the inside of a grill or smoker, would bet it was creosote
Click to expand...

My Austin had a bronze colored paint on the inside and outside of the lid.

Let me resay lol, my lid is powder coated in side and out, have ran it almost to 600 a few times and never the slightest bubble, was it the gold color that came off or black? hate you got a dud , don't think I have seen anybody else with that issue
T

mike243 said:
was it the gold color that came off
Click to expand...

Yes the gold color came off.

As I said earlier, I liked the PB and would have exchanged it had they had another one in stock.
T

Here's a bit of info about the maker, more correctly, the importer, of the Woodcreek: 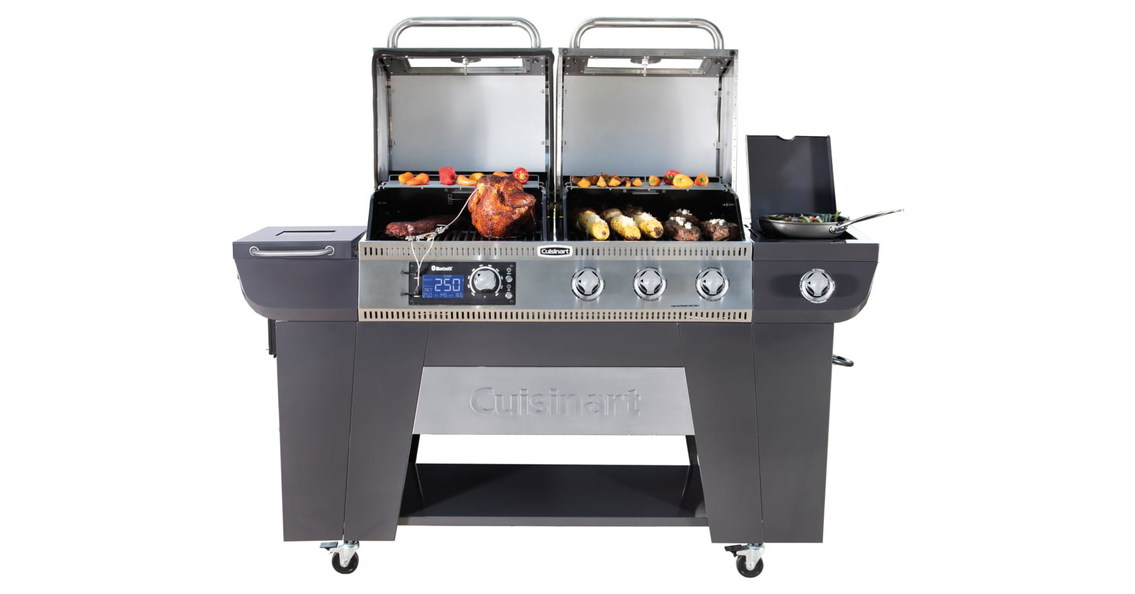 /PRNewswire/ -- The Fulham Group, a Cuisinart® brand licensee for the outdoor grilling product line, announces the launch of new pellet grills and smoking...

Ultimately I think we'll just get another Pit Boss. The size and features are pretty hard to beat. Yeah, they have some QC issues but probably nothing that can't be worked around. Plus the grills are popular enough that there are some upgrades that can be done later if necessary. Smoke Daddy Heavy D diffusers and Rec Tec or other controllers too. I doubt we'll ever see that stuff with the Cuisinart.
J

Pit Boss comes with a five year warranty. At least they design their own products. I'm skeptical about something designed by someone else with the Cuisinart name slapped on it.
T

So maybe a Woodcreek is the grill to get after all...

I went to Lowe's and bought a Pit Boss 1100. Upon assembly I find that the unit runs hot. Way hot!

On the smoke setting, it runs as much as 290° on P4. Adjusting to P7 cools things off a little but not much. Regular cook settings don't show as much error as the smoke settings but these are also probably 75° higher than the dial settings.

I called Pit Boss and they told me it was likely the RTD probe. Not wanting to wait for a new one to be shipped from customer service I bought one off Amazon and had it yesterday. Installing the replacement probe did nothing to fix the temps.

I am not interested in waiting for customer service although I'll probably give them the benefit of the doubt. I'll call this morning to inquire about a new control board. But Plan A is to load the grill up and take it back to Lowe's.

Even without of the control board issue I see the inside of the unit is getting covered with a layer of fine ash. It seems that particulates are blowing up between the slots in the flame grill vent even though the vent is fully closed. Do I want to eat food that's covered in a fine layer of ash?

I noticed none of these with my Austin XL. As I've already said, I should have just scraped the flaking paint off the lid and kept rolling...

Live and learn I guess but it appears to me that Pit Boss has somewhere between zero and no quality control.
J

Yeah, I'd take it back and just get a different unit. Luck of the draw is a factor. Pit Boss needs to update their controllers, but only the Platinum line at Walmart has PID temp control currently. Hopefully next spring they'll come out with new or updated models at other retailers.
You must log in or register to reply here.
Share:
Reddit Pinterest Tumblr WhatsApp Email Link