Chicken Breast Sausage with Pork or Beef Fat, your experiences?

OK So here are the pics and then a write up: 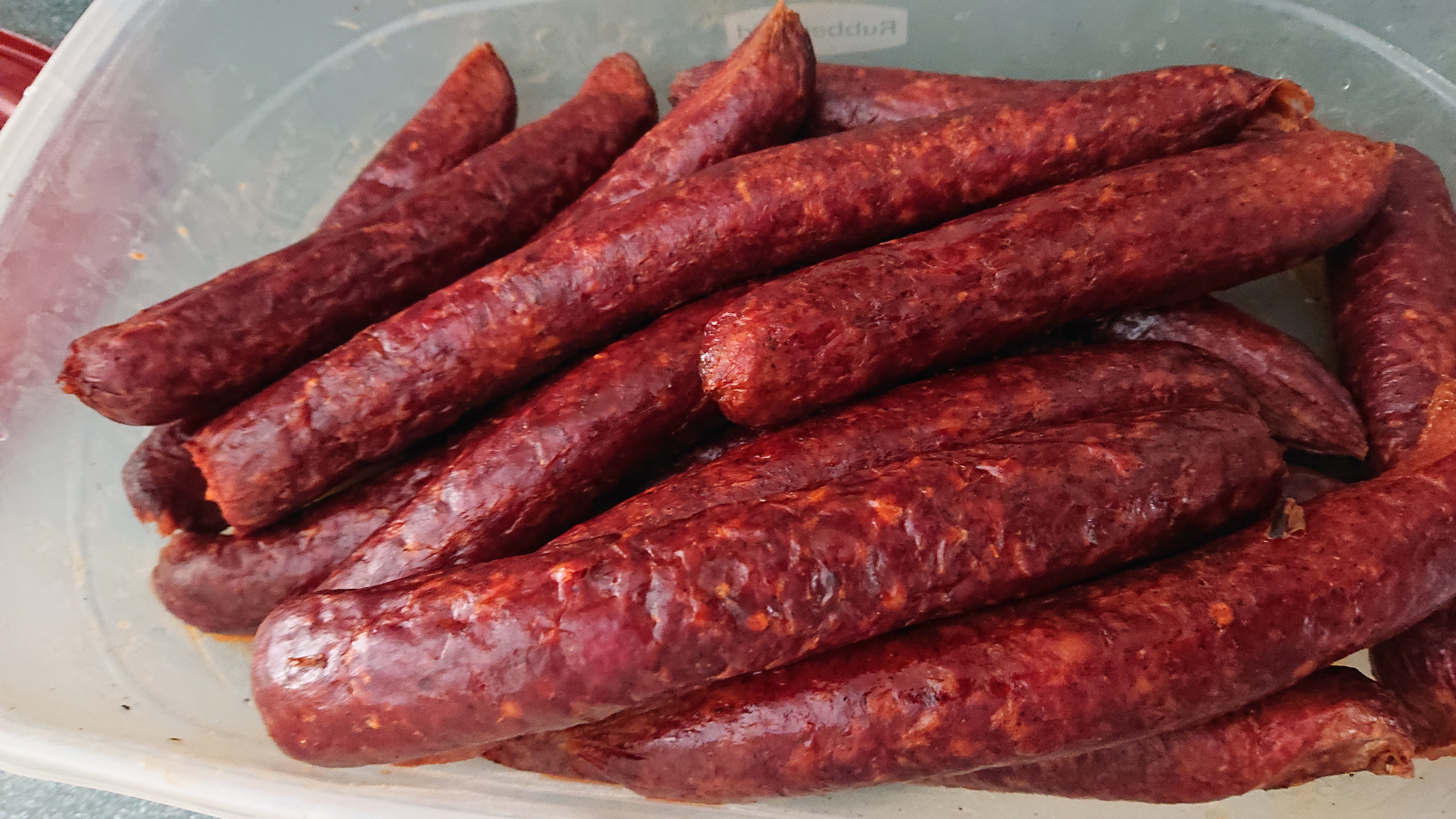 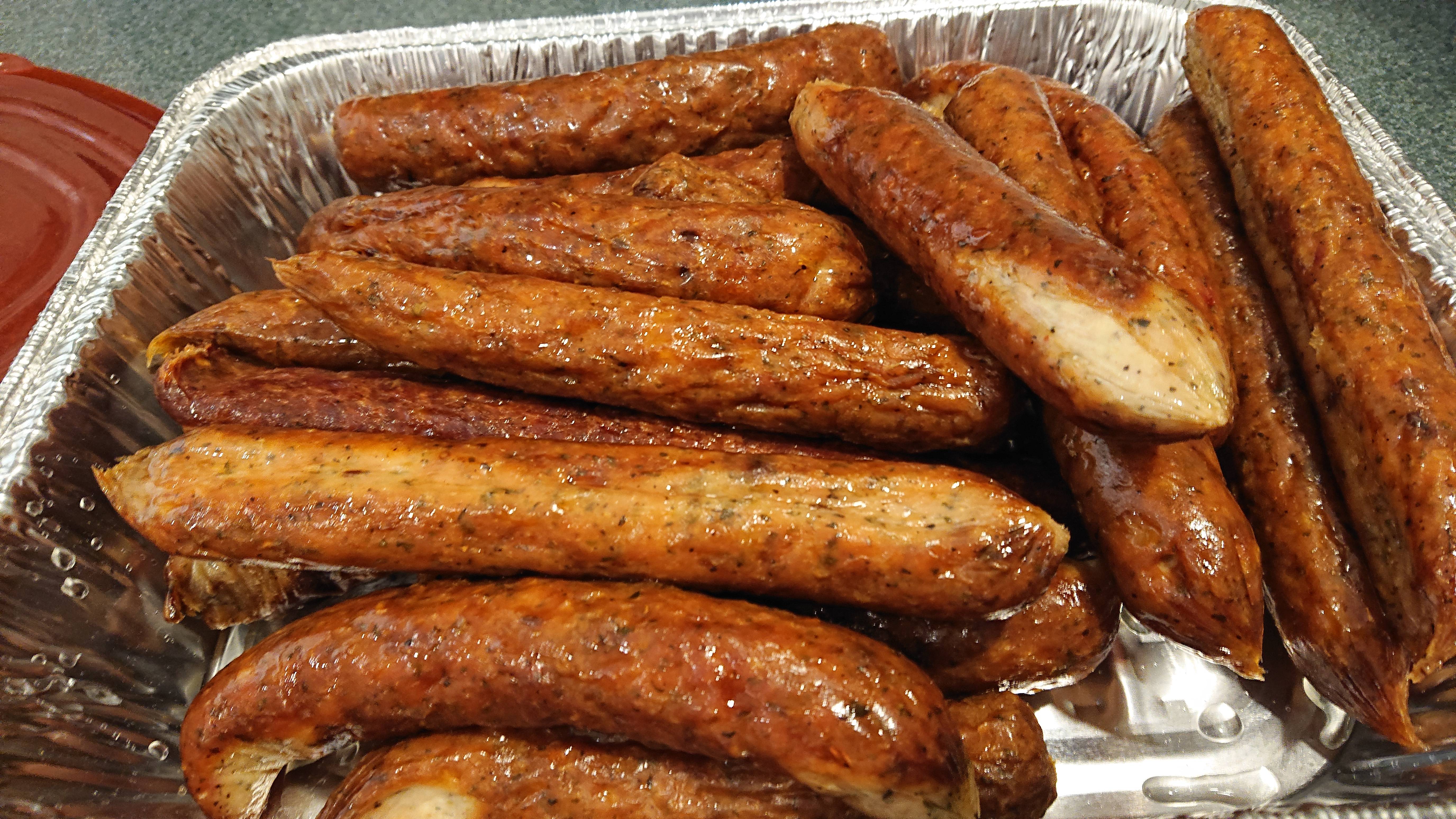 The pork & beef Texas Hot Gut/Link were awesome!!! I am going to make a little tweak to either use ground anise or actually use Fennel seed in it as that flavor was nice but a bit strong where the seeds were so if it were more evenly distributed that would be better.

The chicken sausages from

tx smoker were good on flavor, I just have an issue where I am discovering my pork fat is freezer burned :( :( :( So that really sucks about how it detracted from the flavor but that is easily fixable.

Lastly the Buffalo Chicken sausages..... a complete Fat-Out disaster all on me lol.
Good news is my seasoning mixture tasted AMAZING and my fry test was ok but the again the pork fat being freezer burned really hurt things.
This was my first attempt at SV'ing sausage and knowing I needed to hit 165F IT for these sausages I put the SV on 165F and at 151F I throw them in and went to go have lunch and came back an hour later. Let them go for like 20 more minutes and pulled em.... complete fat out.
These things were grainy and mushy so I will have to revisit them gain.

The smoked sausages came out well but as you can see they look more like "dried" sausage. Well this is because I ran the pork & beef sausages along with the chicken sausages in the smoker and I put them in so late that by 3am I was tapping out.
Neither sausage had fully hit temperature for pulling so I said to hell with it and let them go together knowing I would need to get the chicken sausges up to 165F IT.

I run wild pork sausages in natural casings with no issue so I was confident that the hot gut sausage would be fine. Well they ran for so long and by the time I woke up around 10am to deal with them they were holding at 154-156F IT probably for a few hours so they ended up coming out the way they did. NO fat out but the combination of going for so long and the plastic/skinless casings I think just lead to the outside being more of a dried sausage texture.
They are still super juicy and awesome internally.

With the hot gut sausages out of the smoker I was able to move the chicken sausages to the hotter side of the smoker and bump up the temp a little more to get them to 165F IT.
They went for a number of hours longer to get there.


In all I learned a lot and I am confident that in the smoker I can nail cured chicken sausages with 80% boneless skinless chicken breast meat and 20% trimmed pork back fat. I just have to use a non-freezer burned back fat to get the better sausage flavor hahaha.
Also, I need to read up way more on my SV of sausage that has to go to 165F IT unless I want to pasturize it at a lower temp and then I need to prepare for a much longer haul SV cook in that case.

In all it was a great learning experience and I have already confirmed I can make soup with the fatted out meat from the buffalo chicken sausage. They are basically like little chicken meatballs in the soup and the texture and flavor for a soup is acceptable for little ol me :)

Thanks for all the help and feedback everyone, and if you want to try that Buffalo Chicken recipe please go for it because I think I fixed the seasoning recipe to be good for sausage (may need minor tweaks) but I just failed on SV cooking it hahah.

I have been meaning to post but had one heck of time finding this thread again but wanted to add some info. I fell in love with Tabasco Slim Jims and was dead set on creating a clone. I actually came pretty dang close but the important part was that it was a test to see how much hot sauce/vinegar I could get away with. I had no issues with using 5% Tabasco. I was kinda surprised it worked. Also, I am also routinely using 1% lemon juice in my sausages with no issues as well. I plan to bump to 2%. I just ran some and tried to sub Saco buttermilk powder (5%) for the lemon juice and was not happy at all. Just wanted this info in a place where others can benefit from it.

zwiller said:
I have been meaning to post but had one heck of time finding this thread again but wanted to add some info. I fell in love with Tabasco Slim Jims and was dead set on creating a clone. I actually came pretty dang close but the important part was that it was a test to see how much hot sauce/vinegar I could get away with. I had no issues with using 5% Tabasco. I was kinda surprised it worked. Also, I am also routinely using 1% lemon juice in my sausages with no issues as well. I plan to bump to 2%. I just ran some and tried to sub Saco buttermilk powder (5%) for the lemon juice and was not happy at all. Just wanted this info in a place where others can benefit from it.
Click to expand...

zwiller thats good info on what you get away with involving those vinegar and acid amounts. Maybe when chicken breast hits $0.99/lb again I can give it another shot I have more pork fat that is in a different batch which may not be freezer burned haha i will check it out before i buy chicken meat for sausage attempt #2 hahaha :)

I have 10 pounds boneless skinless chicken breast I will grind up with trimmed pork back fast.

Going to go with these 2 recipes which are modified versions of the original.
I modified the Buffalo Chicken one to actually make some sense and maybe turn out tasty, I didn't believe in the original recipe but thought I could tweak/fix it up to make sense.

tx smoker 's modified slightly based on what I had and to be simpler before I add cheese, etc.

Final recipe is going to be a Texas Hot Gut/Link Sausage I've had written down to try for a long while. I modified it too in the couple of areas that didnt make sense and again to be simpler with what I have on hand (like no fresh jalapenos).

Feel free to give your feedback :)

Ok guys just wanting to give an update. I did a 2 pound version today with tweaks I wanted to try and OMG I think I nailed it. I did it without casings so just need to case up and that is the last bit to confirm that I've finished my recipe.

Overall the big change was to cut swap Anise seeds for Fennel seeds and cut the amount in half by ratio. Also I did 50/50 pork and beef but only out of laziness haha.

Finally, this is a true HOT Link that is what I would say is "hot" so cut in half on red pepper and cayenne if you are a spice weenie :)

Here are the updated changes:

Yeah it's pretty damn good. I'm confident I just nailed it. I just need to stuff some and make some to confirm it. I simply rolled this into little links/logs for caseless sausage to mimic my skinless sausage or just make natural casings one :)

So I believe I have nailed my Texas Hot Link (Hot Gut) Sausage recipe!!!! QView and then a ton of info. I've been working on this recipe to try and nail a true hot link sausage like the kind I've gotten in Texas. Texas style sausage usually has some beef in it, plus this sausage has the...
www.smokingmeatforums.com
You must log in or register to reply here.
Share:
Reddit Pinterest Tumblr WhatsApp Email Link