I am on my second test smoke after modifying my Masterbuilt propane cabinet. I put the details here:

Twiddling valves, although satisfying, was cutting into my bourbon time. Being the lazy ass that is me, I knew there had to be a better way. There is. After my conversion, my little smoker is maintaining temp within one degree. The convection fan keeps the cabinet an equal temp except for the...
www.smokingmeatforums.com

This afternoon, after cleaning up my garage from this project (used every darned tool I own), I decided to test-smoke a couple of stray blocks of Tillamook cheese that were hanging out. The Tillamook dairy is only about an hour‘s drive from here in Oregon, so that is my favorite.

What is different this time, is after my modifications, I can get the temp down to ninety degrees, and I now have a convection fan to stir the smoke up. In this cabinet, the smoke tends to travel up the back wall and out the top vent. The idea behind the fan is to distribute the smoke evenly.

I started out by cutting up the little blocks into cracker-sized blocks. I let them sit out for two hours to warm up to room temp. Meanwhile, I warmed up the smoker with a mix of apple pellets and chips in a tube. It was forty degrees outside. The smoker was running at ninety, even in a strong wind. After the cheese warmed up, I put them in and left the burner on for about an hour. Then I shut off the burner and let it coast. The smoke generator does not add any heat. I set the convection fan to run at half-speed just to to stir up the smoke.

I have smoked cheese in cold weather before, and felt the cheese did not accept the smoke as well as I had hoped. In warmer weather, I got a better taste. If you have opinions on this, I’d like to hear from you.

After two hours, the cabinet was at sixty degrees. I tested a block and really liked the taste. In fact, I think this may be the best tasting batch to date. And, the blocks did not sweat. I attribute this to the fan. Each block has a nice even smoke unlike past smokes. The cheese is delicious right now without any bitterness. I sliced some up and served it with crackers and wine to enjoy with Mrs. Smoke. She loves it!

The convection fan seems to be making a noticeable improvement in my initial test smokes. Tomorrow I am going to try out a couple of pieces of salmon. Maintaining a low temp for the salmon will be a good test of the PID, and I think the fan is going to make positive difference as well. 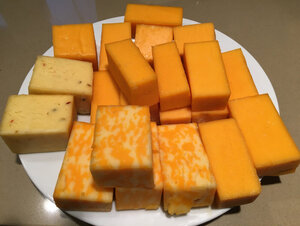 Now that this project has moved out of my garage, I can get back to the important project of fabricating a stainless steel exhaust system for my motorcycle project. Priorities you know. 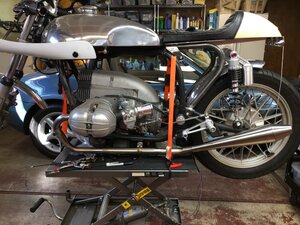 That cheese look mighty good to me.

What is the car lurking in the background?

Congratulations on your successful smoker mods. I envy your closeness to Tillamook.

Nice that your mods are doing what your visions are. The fan sounds like the major key to it all. Great idea

And the bike , very cool

one eyed jack said:
What is the car lurking in the background?
Click to expand...

OldSmoke said:
The bike was a BMW R65. The car is a BMW Z3. I’m not a BMW fanatic, it just sorta happened.
Click to expand...

Thanks for the comeback.

DRKsmoking said:
And the bike , very cool
Click to expand...

Thanks, at least it keeps me off the streets. I used to restore MGs. I worked very hard to return them to original. This project I wanted to be a custom. No constraints (other than skills and $$).

OldSmoke said:
Thanks, at least it keeps me off the streets. I used to restore MGs. I worked very hard to return them to original. This project I wanted to be a custom. No constraints (other than skills and $$).
Click to expand...

Always loved the idea of the MG's, back in school friends of mine had a MG Triumph and I almost bought a Midget. That was awhile ago now.
I have also been away from bikes for about 25 years, going tomorrow to look at a 2000 DR650 Street and Trail , it might be a little tall for me . Need something to get me to the backwoods fishing holes

Here’s a couple to enjoy memory lane with: 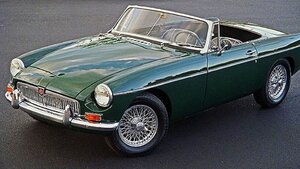 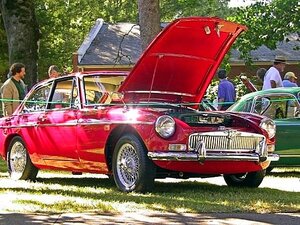 Love the green one, my buddiies Triumph was a real sharp blue.. he always got the girls, lol

yes hoping the DR650 fits good and not too heavy if I do tip her over. I have dropped 1 or 2 but that was awhile ago. not sure how heavy this will be if I set it down in the mud ha ha

To get back on track with your mods and yes the cheese,

Your fan you say you pulled from a convection oven. Do you think that could be set up in my smoker with just a dial for speed and power. Just to very lightly move the air/smoke around

Sorry I have the same smoker as you do. with not near the mods as you, lol

I will post a parts list and photos later today. I don’t see why you can’t mount it. Does your model have insulation?

It does change where you place your racks due to the fan. I am looking at notching one of my racks to fix this.

sounds good, no insulation on my unit. as mine is set up in the smokers shack i built. out of the weather that way, good for me and the smoker

Could I build a box that attaches to the smoker so the actual fan is set back out of the unit by the thickness of the fan. Or do you think that would impede the air movement.

I just posted my build here:

In a fit of Oregon rain-induced insanity, I decided to add a convection fan to my Masterbuilt propane cabinet smoker. My two goals were to; even out the temps in the cabinet, and to circulate the smoke more evenly. I was routinely measuring 30+ degree temp differences between the racks...
www.smokingmeatforums.com
You must log in or register to reply here.
Share:
Reddit Pinterest Tumblr WhatsApp Email Link