I did another test smoke this morning with the PID and convection fan modification on my propane smoker. Using Costco frozen salmon, just a simple soy sauce, apple juice brine for four hours, over night uncovered, and about four hours smoking over a blend of hickory then apple, with a light basting of maple syrup. The white in the photo was where the probe was inserted. 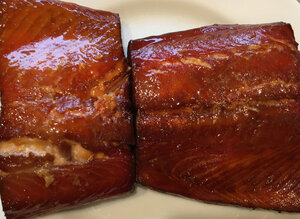 It is my best batch to date. Mrs Smoke was amazed at how moist it is. It was hard to stop sampling. I served it on sourdough crisps with cream cheese. And champagne. 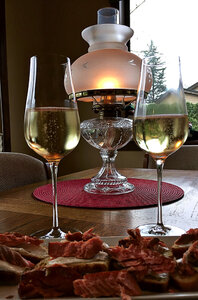 I am sold on both of the modifications. I am convinced the convection fan is a game changer.

Man that looks amazing. Pour me up 6 glasses of champagne and I'll take care of the leftover salmon!

Looks mighty fine to me. Jake can have my champagne I'll take the salmon.

Awesome stuff! It looks delicious on this side of the screen.

What does the added fan do for you? Eliminate hot spots?

FWIW - My wife likes smoked salmon so much she has figured out how to use my MES40.

I’m not a fan of Champagne, but a glass of Johnny Black would really go good with your salmon!
It really looks delicious!
Al

uncle eddie said:
What does the added fan do for you? Eliminate hot spots?
Click to expand... 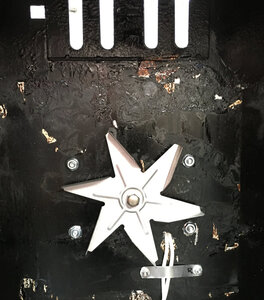 Thanks for the like! The convection fan does even out the temps in the cabinet and helps distribute the smoke. In these cabinets, the smoke tends to follow up the back wall and out the rear vent.

I am guessing that the fan may also improve bark formation. I am going to test that idea tonight on a ribeye.

I also think it will help jerky dry more evenly. I’ll be testing that this weekend.

Beautiful! Smoked at what temp?