Ok, not smoking, but…

It started with a recipe for pork adobo I found in the June/July issue of Wine Enthusiast. It was a free subscription, and well, I really do like wine.

It included pickled carrots, peppers, onions, and a papaya. Whoa, never done that before. Two days in advance, I julienned the veggies and fruit. Mixed up the pickling juice and let it do it’s thing, whatever that is. 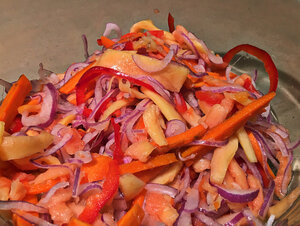 The next day I made up the marinade. It seemed very familiar, very similar to the marinades I use for smoking. They called for pork belly, but I switched to pork shoulder. The cuts at the meat market looked a lot leaner, but still had marbling for flavor. I trimmed and sliced into half inch thick portions. The meat marinaded for 24 hours.

On dinner day, I grilled the meat, turning and basting every two minutes until they reached 145 degrees.

I served the meat on a bed of rice with the pickled veggies. Oh my goodness it is good. I paired it with a 2012 Columbia Valley Primitivo. Perfect! 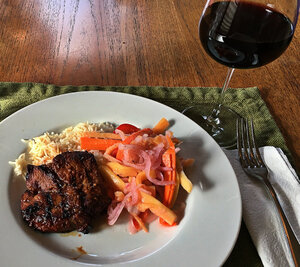 Damned if you guys aren’t teaching me how to cook!

Yea I would eat that! Nice plate of food!

Looks tasty. What was in the Marinade?...JJ

Looks very good, what was your pickle juice if you dont mind.
We are always on the lookout for new pickle flavours

I'm not a wine drinker...But I would not turn down that plate of greatness.
Jim

That looks really good!! Well done and the time put into all the marinating looks like it paid off.


OldSmoke said:
Damned if you guys aren’t teaching me how to cook!
Click to expand...

Don't feel bad. They are trying to do the same thing to me. Thus far it's not working very well but they are still trying

Heck yes, it looks good! I'll take a plateful and and a glass of wine or two!

Thank you for the likes!

I checked the magazine website and they have published the recipe:

This grilled pork has an adobo sauce that's both delicious and easy to make. Serve it with a pickled papaya side dish and red wine.

I made it exactly to the recipe except the cut of meat. The other minor modification is I cooked the pork to temperature rather than time. Since I had a couple of thicker pieces, I pulled them as they each reached temperature. Yea, I learned that here!

BTW, I did not have the bottle of Zin they recommended for the pairing. Primitivo is a genetic cousin to Zinfandel, so it substituted nicely.
You must log in or register to reply here.
Share:
Reddit Pinterest Tumblr WhatsApp Email Link