Not looking good for us in Florida

That^^^^^^is why this forum is so awesome! Everybody helping everybody!!

Tampa is now forecast for a direct hit.
But still time for it to wander more.

I urge those on the coast from Naples to Steinhatchee to evacuate if you can.
Especially people in the Ft. Meyers / Cape Coral areas as the storm surge there may be devastating.
Those inland from Gainesville to Labelle might should do the same.
Get out you guys!
Get out even if you're not right in the middle of it.
The East side will be wicked.

Two years ago we dodged Sally being on the West side of Mobile Bay.
But the East side and further got slammed, friends of mine lost everything.
Don't be them in water up to your waist, in the rain/wind with no transportation or shelter, wet cold and scared shitless.

***Below are excerpts from some folks I knew who lost it all in Sally.***

Facebook is full of my friends and acquaintances who live on the other side of Mobile Bay, and along the beaches, who're getting absolutely hammered. It's bad, my friend David just posted this,

Lost the ceiling in the garage and now the kitchen ceiling just hit the floor. Roofing has failed. Also, power is out.
Click to expand...

My best hunting/fishing buddy bugged out to his hunting property near Grove Hill, AL, His main home is in Orange Beach.
Roll of the dice if it'll still be in one piece tomorrow afternoon.

Dozens more people I know live down that way.

Scott Kennedy
Nasty down here, our fence is gone, neighbors porch collapsed. Lots of flooding. Moving into the eye now though so hopefully that’s the worst of it

Stephen Franklin
John ChileRelleno Cox
our cars are floating away from our house and windows about to be blown out."

Four people I know right there, plus others, lost homes and vehicles.
Reactions: negolien, MJB05615 and indaswamp

Latest track as of 1am 9/27 has it shifted slightly to the east before hooking it North....stay salty and stay safe.
Reactions: MJB05615

This mornings track has it dead on Tampa Bay (Bradenton, Palmetto.. that's me) as a 3... boarding up today...

Jerry... Thanks for the offer brother... but my biggest fear is getting stuck in traffic on the interstate with no gas to be had...

Praying that forecasters are wrong (as they usually are) and it changes before making landfall here....

Praying for low impact damage, hoping for the best for all those affected by this storm.

I just wish it was Friday & we can start the cleanup. Good luck Keith. You can always come over here, if you need to evacuate. Only about 1 1/2 hours from us, No RV hookup, but we have blow up beds & whole house gen. Stay safe brother!
Al
Reactions: mike243

SmokinAl said:
I just wish it was Friday & we can start the cleanup. Good luck Keith. You can always come over here, if you need to evacuate. Only about 1 1/2 hours from us, No RV hookup, but we have blow up beds & whole house gen. Stay safe brother!
Al
Click to expand...

As Tom Petty said, the waiting is the hardest part!

My daughter is scheduled to fly into Tampa next week and visit a friend in Gainsville...might not happen

I sure am glad i dont have the hurricane pucker anymore.
Reactions: SmokinAl

SmokinAl said:
It sure looks like were gonna take a hit from this storm.
Haven’t got my home repaired from the hail storm we had in April.
They are supposed to start on Monday, but with a potential major hurricane possibly affecting us on Wed.
I don’t want to have part of the work done, & have a storm hit us.
So far we have a new roof on the house, minus the gutters, but the siding, aluminum roof over the carport, patio, & lanai are what they need to replace next. Nothing is leaking now, ( I just wish I had a gutter on the side of the house), so if this thing is headed our way I don’t want to have them start this until the storm has passed. However, the path may change between now & Monday. Boy I sure hope it just turns east & heads out over the Atlantic. All of us in the Southeast need be hoping the same thing!
Al
Click to expand...

Good Luck and batten down. for once I'm happt to be on the SE coast. got 6 "of rain last night from feeder bands.

Doesn't look or sound good for many. Play the safe card please. You can't stop what is going to happen but you may live another day. Prayers to all. . .

Predicted to be a Cat 4 at landfall.

Track is now forecast to make landfall between Sarasota and Port Charlotte. It's current projected track goes directly through Lakeland and Orlando.
It should be downgraded to a tropical storm by the time it reaches Orlando.

And we know it'll likely move more, so Tampa looks like it'll keep it's century long record of not being hit directly by a hurricane.

fltsfshr get out, get a hotel in Miami if any are left!
Reactions: SecondHandSmoker

We're hanging in there. 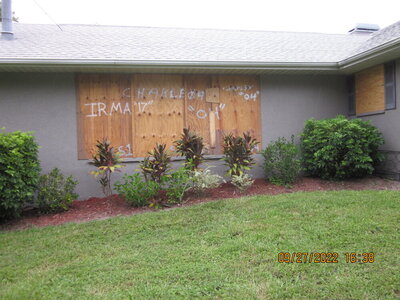 The windows not covered are tempered glass 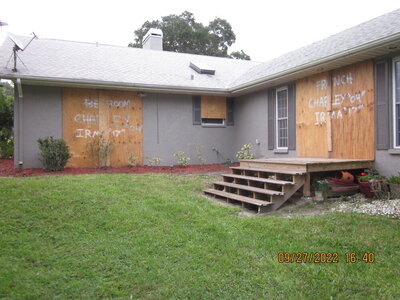 Just a few pics ... No wind or rain YET ... just a little sprinkle
Reactions: MJB05615, mcokevin, GaryHibbert and 2 others

Grab Forest Gump and lieutenant Dan on your way out!! <sarc> LOL!!

Stay safe my friends on SMF in Fla.!!!!! I have major sympathy pains with you guys right now....I don't with that crap on anyone!

My daughter and son-in-law are in Fort Myers in Zone E.
No evacuation orders yet. They said they will stay put and ride it out.

fltsfshr said:
We're hanging in there.
Click to expand...

We rode out Hugo in 1989, NEVER AGAIN!! We were lucky...
Reactions: indaswamp

You all are making me really glad to be up here in the "middle".
Keeping my fingers crossed for all of you....

I'm having flashbacks! Hugo.....<shudder> that one scared the crap out of me!
You must log in or register to reply here.

Mother Nature , the power the destruction, but we are good

Blowing Smoke Around the Smoker. Saturday at 5:14 AM
DRKsmoking

No Smoking for a While

Evolution of A Bear & His Cabinet Shop

A Memorial Day Story, dedicated to those We Lost

Bacon a Weapon of Mass Destruction ?