Justin Bieber Meatloaf (and an introduction)

I’ve been an intermittent lurker for years. I’m not much for posting things online. However, I thought I’d stop lurking and formally join the group via a subscription because I have gained so much knowledge and gleaned from so many experienced folks on this site that I at least wanted to acknowledge and thank those who’ve posted here.

Pop’s brine and pretty much anything Bearcarver are my go-to reads. I started on an electric Masterbuilt then moved on to propane as the electronic boards kept crapping out on me. Three of them all died on me before I caught on and moved on. However, I made some very respectable meals from them. I perfected, for my own tastes, dry cured bacon, hams and Canadian bacon, sausages of all kinds including those scary fermented and dry cured delights. Summer sausage is a favorite as are my brats, Italian, and breakfast sausage. I even made prosciutto. That pig leg hung in my garage for a year and half. It took a lot of patience and unfortunately, it was gone in under 20 minutes.

After giving a lot of thought and research into my next steps I decided on upgrading to a Yoder YS640S. My dream was a stick burner but realistically I don’t think I want to be chasing temps and feeding logs every couple of hours. It was hard to walk away from a stick burner dream but I’m happy with what I chose. It will fit my lifestyle and keep me cooking more often. I gave my gasser to a friend I’ve mentored and he’s now hooked on brining and smoking ham thanks to Pop’s brine.

I’ve taken a lot of pictures over the years of my projects. But the one I want to share with you as a first post is rather unconventional. It’s a meatloaf. When my niece graduated I asked her what she wanted me to cook. It could have been brisket, turkey, pulled pork, anything. Without hesitation she said, “How about a Justin Bieber meatloaf?” Of course I was not expecting that. I had to get creative and summon my non-existent sculpturing skills. I’m pretty sure Justing Bieber would not approve, however, it was the hit of the party. No one wanted to cut into it. They just stared and marveled in horror. The meatloaf was delicious and it eventually disappeared.

I’m not sure how much I’ll be posting but I’ll be present in the background. All that to say I am impressed with the collective wisdom and humility of all the backyard casual pit masters on this site. No YouTube, Facebook, or Instagram glory here. Just a lot of honest and humble cooks trying to make the best meals they can for family and friends. Of all the forums out there, this one is by far the best and most active.

Thanks for your time.

That's pretty cool . Reminds me of The Walking dead though .
Lets see some more .

He sure did have some pretty teeth! Lol! Good imagination! Yep... we love pics!
And welcome from Iowa!

Welcome from Colorado.
Could see that smile from a mile away.
Got a recipe on that loaf?

Welcome from Mississippi. Glad you joined up. Please dont be a stranger.
Jim

Welcome from Kentucky. That's kind of a disturbing looking meat loaf there, but if it made your niece's day, it was well worth it.

SmokinEdge said:
Welcome from Colorado.
Could see that smile from a mile away.
Got a recipe on that loaf?
Click to expand...

I think I used Alton Brown's Good Eats Meatloaf. Google it and it should pop up.

Lol love the creativity!! Welcome from Ohio. You should definitely post more often. We all love the food pics! Congrats on the new Yoder. Super nice quality cooker your got.

Here's the process in all its glory. Bieber 2 is about 45 minutes into the cook. I knew I was in trouble with all the meat ooze. So I took my basting brush and wiped as much away as I good and put it back in. Bieber 3 is after most of the brown ooze stopped but I knew I would have to put on the sauce and then put it under the broiler if I had any hope of saving it. Bieber 4 is the post mortem after everyone dug in. I think the birthday girl wisely chose the top with all the prosciutto on it. It was a fun project. 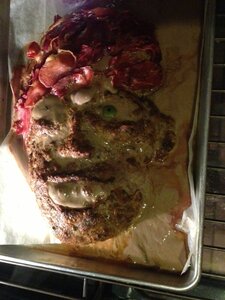 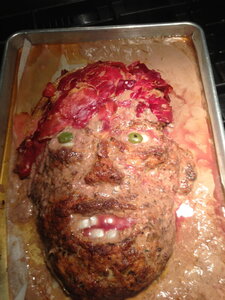 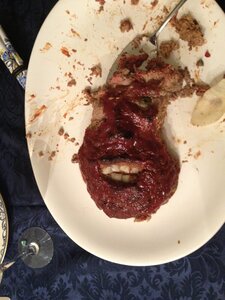 I also applaud your creativity, & results!
9

Welcome to SMF from SE Ga. Yes sir....
Now that's creativity at it's best !
Glad it tasted good and congrats on the Yoder !

As for the meatloaf, it reminds me of melting-face-Nazi from Raiders of the Lost Ark but glad to hear it was a hit. If you'll excuse me, I'll just be over here, sipping on my: 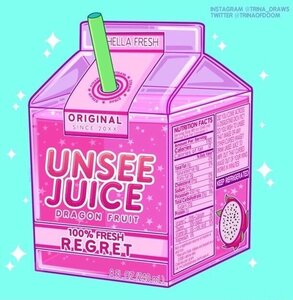 Very creative!
Not sure I would want my meatloaf staring at me though!
But I guess I could close my eyes & just take a bite.
I bet it was real good!
Al
You must log in or register to reply here.
Share:
Reddit Pinterest Tumblr WhatsApp Email Link