So I actually got out of work early yesterday and had some time to play around in the kitchen. Whipped up a batch of my first chicken sausage. Didn’t take a whole lot of pictures because, well, I forgot (sorry). I came up with the recipe kind of on the fly, using some amounts that seemed/looked reasonable. I cook a lot and develop my own recipes regularly, so I thought I had a good handle on what an appropriate amount of various ingredients would be. I think maybe my estimates would have been fine for a typical entrée, but could use some tweaking for going into a sausage mix. Approximate (from memory) recipe I came up with is listed below (left my recipe/note book at home so I will confirm amounts when I get back):

I deboned all the chicken thighs (and removed the main tendon/ligament that runs next to the bone) and trimmed off any flaps of excess skin. I kept the main portion of the skin on all the thighs (i.e. didn’t remove any entirely). If you don’t cook with leeks much, you need to rinse them VERY well. When farming them, heaps of dirt are piled up around the base to block the sunlight (so more of the base stays soft and white/light green). As the leek grows they pile more dirt on. As a result, inside every layer of the leek there are fine particle of dirt/sand that get trapped that you need to rinse out. After rinsing, I gave them a rough chop so they’d fit in my grinder. I ran everything (chicken, leeks, spinach and sage) through the grinder on a 4.5 mm (about 3/16”-ish) plate. I ran a few pieces of chicken through first (to get the internals coated in some fat so the veggies wouldn’t freeze and stick to the frozen metal grinder body) then ran the green stuff through, then the rest of the meat to flush out all the veggie residue.

So I use leeks a lot in cooking (one my favorite flavors to use in soups or add to chicken dishes). It typically has a very mild flavor. For ~2.5 pounds of chicken 1 leek seemed like it would be a pretty moderate amount (again, I’m thinking like in a baked or sautéed chicken dish or something). But after I ran it all through the grinder, and started mixing, the mix smelled VERY strong of leeks. To the point I was convinced the sausage was going to be WAY too strong leek-flavor and not be tasty. Not sure why it was so much more intense than I expected, I’m guessing from being ground up rather than just diced into slices like I’d normally do when cooking? Either way, I soldiered on nevertheless. Since the spice blend had dried shallots and chives in it, I rehydrated it in a small container with the 50 ml of white wine while I was prepping everything else. Once everything was ground, I added the rehydrated spice blend (with the wine), salt, pepper, and 2 Tbsp (~10 g) of dry milk powder (this was the amount I originally intended to use). The mixture was a bit wetter than I had expected (maybe moisture from all the greens?) and while it was binding some, it wasn’t as strong as I expected or wanted. So I ended up adding another 2 Tbsp (for a total of 4 Tbsp, or ¼ cup, or 20 g) of dry milk powder. At this point I thought it might still need a little more help binding so I crushed up about 20 g of panko bread crumbs into a fine texture and added that to the mix as well. I mixed together until incorporated and stashed in the fridge for 20-30 mins to let the salt extract some more myosin to help with binding. Pulled from fridge, mixed some more until texture seemed right, and stuffed into natural hog casings.

I ended up with 2 lb 10 oz of links, and another 10 oz of bulk uncased sausage. I fried up about 2 oz of the uncased in a test patty and I have to say I was pleasantly surprised. The leek flavor mellowed a LOT with cooking. It was still definitely leek-flavored (if you don’t like leeks, you wont like this sausage) but not NEARLY as intense as I feared. It was really moist and juicy, texture seemed spot on, and overall flavor profile was pretty great. As far as improvements for next time, I didn’t really notice much sage flavor, and the spinach didn’t seem to bring much to the table other than making the sausage very green. So next time I will probably halve the amount of leek used, reduce/eliminate spinach, use more sage (or maybe dried sage?) and probably reduce amount of wine added (mixture seemed more wet than I was used to, but maybe that just how chicken sausage is?).

Overall I was very pleased with my first attempt at chicken sausage. The result is edible, and pretty tasty, and I learned a lot for next time. So that’s a win in my book. Thanks to you all for the advice and resources the help me give this a shot. Much appreciated. Sorry I only have the one picture, next time around I’ll try to capture more of the process.

Nice piece of work, the links appear to be uniform, Like. A picture is worth a thousand words. RAY

RocketScientist said:
so I thought I had a good handle on what an appropriate amount of various ingredients would be.
Click to expand...

This chart might help you get an idea where to start with amounts . 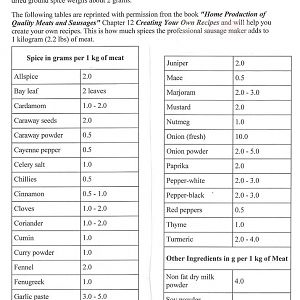 
sawhorseray said:
A picture is worth a thousand words.
Click to expand...

Thanks for the links Chopsaw, that's a solid resource. I read through that list when trying to come up with this recipe (I've got a copy of the Marianski book). But it doesn't list leeks, and I couldn't find a recipe of his (or elsewhere) that used them to get a rough idea of an appropraite amount. The closest listed there is fresh onions, which shows 10g (per 1000 g), but leeks are MUCH less pungent than onions, and 10 g seemed way too little. I may have missed the mark with my amount, but I'm thinking around 100-150 g (for 1200 g of chicken) will probably do the trick next time around.

As for the length, I'll have you know I kept it to right at 1,000 words (well, 1,087, but who's counting) . I know some people aren't very strong readers or have short attention spans and may get intimidated by or struggle with so many words. Next time around I'll include more pretty pictures at the end for them so they can enjoy the post too. Good news is nobody is forcing them to read everything I wrote, if they get bored they can just skip it. But I figured better to include a high level of detail for those who might want it; anyone who comes across this post later and may want to try the sausage themselves, or could catch where I may have made a mistake and give some feedback (e.g. Chopsaw's link to spice guidelines).

chopsaw said:
This chart might help you get an idea where to start with amounts .

This LINK also has (with permission) the tables from the Marianski book along with a lot of other useful information.

Don't know if it's been mentioned yet, but google Len Poli; he has a bunch of chicken sausage recipes on his website.

Here's the link to his sight, it's a bit of a PITA at times, you can't copy and paste his recipes. RAY

A collection of proven recipes for making sausage. Recipes and formulations are in both U.S. and Metric measurements with instruction on grinding, mixing, stuffing, coorking or curing sausages

lpoli.50webs.com
You must log in or register to reply here.

L
Smoking Large Amounts of Sausages at once

M
ALL BEEF BOLOGNA, AND A THANK-YOU