A number of years ago we used to take motorcycle trips to a small German town about 100 miles west of us. There is a restaurant there we loved stopping at and their specialty was traditional German cuisine. I fell in love with the Rouladen they served and it was my staple dish when we stopped. The week before Labor Day Tracy and I went out there for a 3-day trip for me to chauffeur her around to visit a bunch of the world-class wineries that have been developed in that area. One night we went back to the restaurant that we loved only to be hugely disappointed. Ordered the Rouladen and it was horrible...to the point of being inedible. I still wanted one though so decided to make them. Did some reading to find the common denominators for the dish and set about creating it.

Started out putting together a potato casserole of sorts. Taters layered in with salt, pepper, a drizzle of EVOO, and sliced Cooper sharp white cheese then a splash of heavy cream on top Defrost the skirt steak and cut it in half Pound it out with the meat mallet, cover it with spicy German mustard, bacon, pickles, and diced onions Roll them up, tie them off, and into a pan with a little EVOO to sear them Add onions, carrots, and celery then deglaze the pan with red wine. You want to get all the crunchies off the bottom to incorporate into the gravy, which is coming later Add beef broth and put the Rouladens back in to simmer for a while. I covered the pan for this step After simmering, remove the Rouladens, strain the broth, put it back in the pan sans the veggies, and add heavy cream Potato casserole was cooked on the grill and is done. Cooked for a while with the lid on to soften the potatoes then uncovered to brown up the cheese Plated: Rouladens smothered with gravy, the potato casserole, and some kraut Come to find out from our good friend

Steve H ,the addition of the pickles is more of a regional thing and more commonly seen in Southern Germany. His wife is from Northern Germany so I'm strongly of the impression she knows what she's talking about These are typically made with thinly sliced beef but skirt steak was the best I could do. In summary, the flavor of the Rouladen was outstanding!! The cheese in the potato casserole came to me via

chef jimmyj in a recent exchange we did and it is some of the best cheese we've ever had. We love it and the casserole was extremely good. The star of the show however was that gravy. I've never had such a deep, rich, spicy, and flavorful gravy in all my life. The Rouladens could ave simmered a bit longer to get a tad more tender. They weren't tough by any means, just not as tender as they should have been. The addition of the pickles was fantastic and the flavors melded beautifully. Next time though I'll use thinner slices of pickles. They were a bit flavor forward. Using thinner slices will also make it easier to roll the things up. The big slices kept wanting to slide forward and mush out the front. Last critique was the kraut. We both love it but along with the pickles there was too much "sour". Recommend serving a less tart side dish. All in all a great meal but more importantly, a great learning experience. The next round I'll leave myself more time and they will be exceptional.

Thanks once again for sticking this one out. It was a superb meal that some folks might enjoy creating. Stay safe, be well, and we will see y'all again soon.

Robert , that is outstanding. Love the whole meal. Was going to ask as I was reading if you used dill for your pickle but you answered that later on. I am not much for dill so I will use sliced sandwich pickles ( bread and butter ).
Because I am going to try this, just have to think on what cut of meat to use.
And your potatoe CI pan looks out of this world

I have not heard of this meal before . We are of German decent but way back . We have been here sense around 1840's I think so not a lot of old world foods run down the family line.

Even what you call "could have been better" looks pretty exceptional to me!
Jim

tx smoker said:
The star of the show however was that gravy. I've never had such a deep, rich, spicy, and flavorful gravy
Click to expand...

And you know me I also love gravy, and that looks fantastic. Whole plate top notch

Thanks Al!! It was a bit time consuming but fun and really good so well worth the time. BTW, those are your pickles in there


DRKsmoking said:
I have not heard of this meal before . We are of German decent but way back
Click to expand...

Thanks David. I too am of German descent but a few generations ago. I just looked at a few online recipes but pulled this up for you. Gives a pretty good definition of what the meal is about: 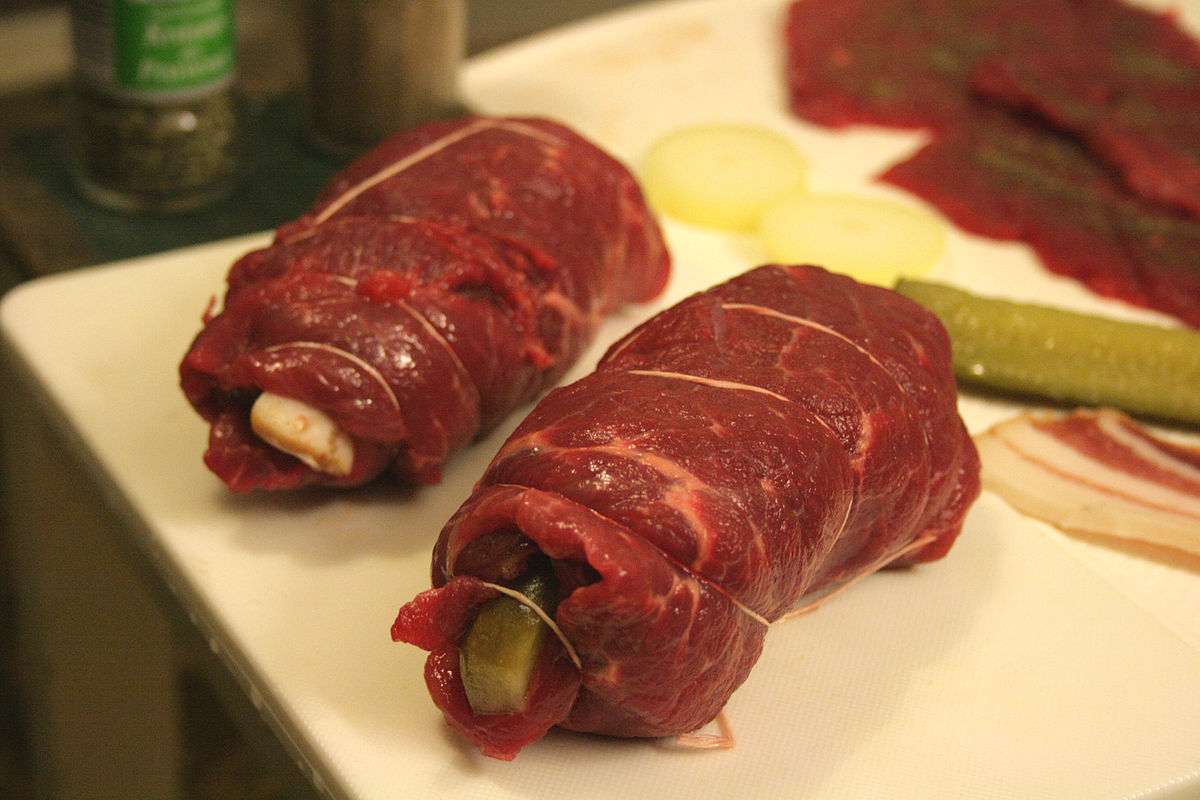 tx smoker said:
Thanks David. I too am of German descent but a few generations ago. I just looked at a few online recipes but pulled this up for you. Gives a pretty good definition of what the meal is about:
Click to expand...

Thanks Robert , for the link, That explains a little more to me. And it mentions Gherkins so there is my sweet pickle that I can get into.

Thank you again ( I see a carousel ride in your future )

Looks great. This was one of the regular staples growing up Dutch!

It looks wonderful to me! HE HE HE... you had me at gravy but you knew that! Those potatoes look awesome as well! Even tho I have some German ancestry I would suck at it... kraut is not my thing. Only time I liked it the juice was drained from it and it was boiled in beer lol.

Looks fantastic to me Robert. I enjoy your write ups. Very nicely done.
Meat, taters and gravy is excellent in any language. I wonder how the rouladen would be with a little homemade kraut rolled up in them?

Another excellent food journey you took us on Robert! The end results are phenomenal as usual. That cut shot is the magazine shot buddy. This is the second dish with some kraut I’ve seen. With my new fermenting addiction I feel some kraut in my future.

Awesome job Robert! My mother made Rouladen when growing up without the pickle. I like to add it, I never tried making it with skirt steak, usually use bottom round pounded thin, so tender after simmering it almost falls apart. Round out the plate with red cabbage and spaetzle.... oh boy you inspired me to make it next weekend as it takes too long for a week night. We go to a great German restaurant in Lake Ariel PA that smokes there Rouladen meat and it is a nice twist.

Robert , that looks fantastic . Needs the pickle for sure in my opinion .
We always add did pickles to the dutch oven or crock pot for roast beef .
Nice work on that plate of food .

Crushed that one! Perfect fall meal!!!!

Nice job! The Pickle can be strong. One of those Spears would've been plenty. I too love Sauerkraut but Rouladen goes with Braised Red Cabbage, like Peanut Butter goes with Jelly. The Sweet and Sour Red Cabbage balances the Tart Pickle and Mustard of the Rouladen and cuts through the Richness of the Gravy at the same time.
My first job in a Restaurant was with a German Chef. She liked to run Rouladen as a Special once a month. She would have me HAND CUT and Pound 50 portions, that's 100 Rolls, from whole Top Rounds.
I'll tell you my friend, your's look just as good...JJ

Boy howdy does that dish ever look fantastic, Like! With that gravy and the taters that'd make for one delicious and satisfying meal, great piece of work Robert. RAY