Who's tired of trying to find anything not made in China?
Ok, so I had a birthday Monday.
The Mrs. got me a knife that I would never have spent the money on because she says I'm a cheapskate.
The handle broke off the cheap 8" chef's knife that I used mainly for cutting up wings and trimming spares to St. Louis ribs.
I mentioned that I needed to replace it and she got me this. 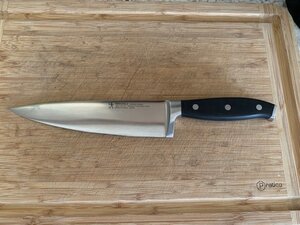 It's a wonderful knife and I use it now for almost everything (which a chef's knife is supposed to do).
What keeps bugging me is this: 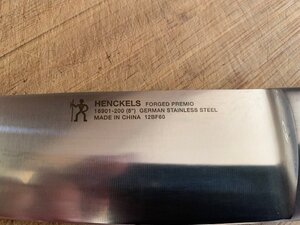 You would think that a fine German knife would come from Germany, but no.
It's not just the U.S. The whole world is in China's back pocket. It doesn't bode well....
Sorry for the rant. I just needed to get it off my chest.

I use to say “half the cost and twice as nice”. However I don’t feel that way anymore. And your not wrong

I have a full set of those knives that I got about a year and a half ago. All the knives were made in Germany but the sharpening steel was made in China. Hopefully Henckels has not gone to the dogs like so many other companies have and I agree with your sentiments 100%. My take...this is NOT a rant, simply stating a truth that many, many companies are going that route and it's more than just bothersome, it's downright appalling IMHO.

While I resent it and wish it were different, China's metal goods are world class and have been for more than two decades.
Back in the mid 90's the engine shop where I worked got talked into trying a forged small Chevy race crankshaft from China.
Everyone at the shop was thinking it would turn out to be a lemon but we installed it and trashed the hell out of it and it held up to everything we could do to make it fail, short of running with no oil or other direct sabotage.
That engine was finally sold to a customer and last I heard of it around 5 years later it was on it's third rebuild and still within specs.
The American version (Crower, which is the gold standard) cost 5 times more than the Chinese item.
We ran the Chinese cranks from then on.

I’m with you. I dabble in knife making and should pursue that more just as a side for good quality USA made knives. That said, I have sourced a few off of fleabay. My personal favorite is F. Herder and Sons. Solingen German steel and all knives you find from them are pre WWII because we bombed his factory to smithereens during the war. Great steel and historical. Haven’t bought a kitchen knife, but picked up a rose handled slicer all complete, and a sheep skinner that was a blank and I added hickory handle to. 100% agree. You shouldn't have to hunt for made in the USA items so hard, it's getting way harder than it used to be. A German brand knife made in China is disgusting. Like you said, it's not just us. Eventually we'll be subjects and get a bowl of rice per day for our labor.
Sooo, on to what would make your "German" knife proper, my wicked, badass, clever of 30 years or so. 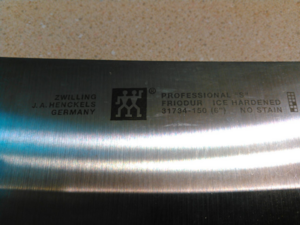 Its part of the Chinese plan to be come the world Superpower. For them its not a sprint but a marathon. They plan in decades not years. And with the global economy so many of our great leaders are wanting it only gets worse. Just look how that ship stuck in the suez canal for a week screwed things up.

I don't mind too much where an item comes from as long as it works. I'd love more stuff to be made in America. I'd also love that stuff be just as affordable being made in America but that's not the case.

I'm hard on items that come from China that are crap. These items are usually electronic components like switches, fuse holders, etc (not circuit boards).... they are inexpensive yes but are simply trash that doesn't last and that is why you get 5-10 at a time for a low price hahahha. I also avoid many metal items from China when I need it to actually be good metal and some halfassed alloy concoction claiming to be the metal I want.

Without the low cost of items in made China many small business could not get packaging, print, and electronic circuitry made that allows them to sell their goods to Americans. Same for equipment and many other items.

Without American made items I would have no options but to use cheap faulty Chinese parts and items or make my own somehow.

There are just trade offs. Being a small business owner myself I can easily see the good and the bad. The main thing I suggest to people is to simply make it work for you instead of you working for it lol. This applies to pretty much everything in life :)

Thank you globalists and Wally Mart that forced suppliers to go to China, India, etc. to cut costs and save the US from toxic emissions.

I think Henkel makes some of their series of knives in China but some still in Germany as well.

Yep. Gotta be careful when the name Henckels is on the product. Zwilling J.A. Henckels are made in Germany (2 men on the logo).

J.A. Henckels International (one man logo), their budget line, has been made in Spain. Another budget line that only says Henckels (also one man logo) is made in India, China, and Thailand. All three lines are owned by Zwilling J.A Henckels in Solingen, Germany, so it was their choice to manufacture budget knives elsewhere.

I own both the German Zwilling J.A.'s and the Spanish J.A. Henckels International knives. The steel and edge strength feel identical, but the Zwilling knives are a LOT heavier.

And if you think German knives made in China sucks, don't go shopping for Japanese Knives unless you know EXACTLY what you're buying. China is making fake Japanese knives, using Japanese names, claiming to use Japanese steel that is unlawful to export from Japan.

But that's another thread.

A lot of the reason manufacturers decided to go overseas was/is a combination of high Taxation and high Labor Costs. I've been a Union member in various jobs and reaped the benefits but also saw Unions and Union Wages/Benefits, slit their own throats. In York, PA, Catapillar had a huge plant that supported a large number of area workers. Around 1997, the union contract was up and negotiations began. They went days, then weeks, then months with the Union unwilling to compromise. The Owners finally threw in the Towel and Closed the York facility. A sad day for many as I knew several of those affected.
Some day, the Powers that Be, will make America and American workers a Priority and turn things around. If not, we need to start Learning Mandarin. If the company isn't already IN China, all those American Dollars are providing the money for Chinese Investors to buy up American Companies...JJ
A

Fueling Around said:
Thank you globalists and Wally Mart that forced suppliers to go to China, India, etc. to cut costs and save the US from toxic emissions.
Click to expand...

Remember when Made in the USA was basically the slogan for Walmart? Consumers wanted cheaper, consumers got cheaper.

That's exactly right . People want to make their money , then they want a deal on everything . Different if you need to stretch a dollar .

We try not to buy ANYTHING marked "Made in China", but it's getting harder and harder. Wally World and all the Dollar Stars (etc), sell very little that's not made in China. Most of it is cheap garbage.
The only thing I buy that's made in China is drive tires for my Freightliner. The ones I buy are made in a factory co-owned by an reputable tire maker, are a Bridgestone knock off at 1/4 the price. They don't last as long, but I can afford to replace them 3 times and still break even.
Gary

I'm going to start my own company. It will be just like amazon, but only "made in the USA" will be marketed and sold. All the vetting will already have been done. Customer Service will be handled in America with people speaking plain English that you can understand. It would also forever stay a private company and never publicly traded to be destroyed by corporate shareholder greed.
Who is in with me for the start-up?

browneyesvictim said:
Who is in with me for the start-up?
Click to expand...

Wouldn't that make them shareholders?
You might have a hard time finding anything to sell.....

smokeymose said:
Wouldn't that make them shareholders?
Click to expand...