(copied from my blog, hence the odd formatting; apologies)

Had a friend request that I do a dish with chicken. I like that idea, since I've been spending waaaay  too much money on meats lately and chicken is relatively easy to do. Plus I have this lovely new rotisserie attachment for the gas grill, so I figured today was a good day to give that a test run. (And by new, I mean I've had it for I don't know how many months and never bothered to get it out of the box. haha)

Took me about 30 minutes to get the rotisserie installed on the grill and run the cords to it in such away that the dogs won't be tempted to snack on the cords.

Then I went down to Winco and picked up a whole chicken. Prepping a chicken is definitely not one of my favorite things to do, even if it is easy. Something about reaching inside a cold, clammy animal carcass is less than appealing to me. Shudder.

Anyway, I got back from the store, hollowed the chicken out, put it on the rotisserie rod, and began adding the dry rub. It consisted of: 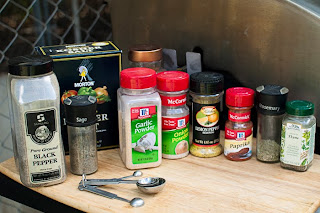 I put all those things into a shaker jar, mixed them together and headed out to season the chicken.

Now, last time I did a barbecue chicken, the skin was very soft and basically fell off when I was carving the bird. To avoid that, I went searching through various internet forums to find a trick to crisp the skin without burning the chicken. There were a few different pieces of advice from fellow barbecue enthusiasts ranging from rubbing the chicken with mayo to using a blowtorch to crisp it. I decided on a more moderate approach:  spraying the skin with Pam, then applying the seasoning, then giving it another light dusting of Pam.

After shaking the seasoning on, I pinned down the wings and tied up the thighs so they wouldn't flap around (pardon the pun). Then I inserted a pan with water underneath, meant to catch drips and also keep the chicken nice and moist.
Once everything was ready, I turned on the burners and switched on the rotisserie motor. My gas grill has four burners and the chicken was positioned right in the middle of the grill. In the interest of not having any flare ups or too much direct heat, I turned on the outer two burners to a medium level. Once I closed the lid, the temperature was holding at about 300 degrees (right where I wanted it).

After about a half hour, I started thinking some smoke would be a nice addition. I set up a small foil "smoke box" with a couple pieces of charcoal and a soaked chunk of mesquite. It smoked away for a little while, but eventually caught fire and spoiled that plan. On a charcoal grill that would have been no problem, but on a gas grill it didn't work out too well. I scrapped that plan and moved on. No harm done.

While the bird was turning, I decided to make a basting sauce for the chicken. Shortly before taking the chicken off the rotisserie, I figured I would baste the chicken with the sauce, crisp it, then wrap in foil and serve. I took a recipe for sauce I've used before and made a few changes for this particular dish (namely the chicken broth, lemon juice, garlic, and honey). When all was said and done, it contained:


(By the way, if you happen to be making this sauce at some point and it smells very strongly of vinegar and/or very acidic as you're boiling it, don't worry -- that cooks off and will leave you with a sweet and tangy sauce without the weird smell. Worse case, if it really bothers you then you could probably scale back the amount of cider vinegar and lemon juice by about half.)

I combined all those items in a pan, brought them to a boil, the reduced to a simmer for it to thicken. That took around a half hour. Then I proceeded to crank up the heat to around 400 degrees and baste the chicken while crisping the skin a bit more.

Once the chicken got to around 180 degrees internal temperature (average of three different test sites after about 2 hours of cook time), I shut off the burners and wrapped it in foil to rest for about 15 minutes.

After the chicken was done resting, I went to slice it up. Apparently rotisserie is the way to go for tender chicken! When I went to cut the drumsticks from the body, the bones slipped right out in my hand! And the skin was reasonably crisp without feeling like a potato chip.  I sliced up the rest and served it, giving it another light coat of the sauce I made. I don't know, but for $8 I feel like I did ok -- the family certainly liked it.
You must log in or register to reply here.
Share:
Reddit Pinterest Tumblr WhatsApp Email Link